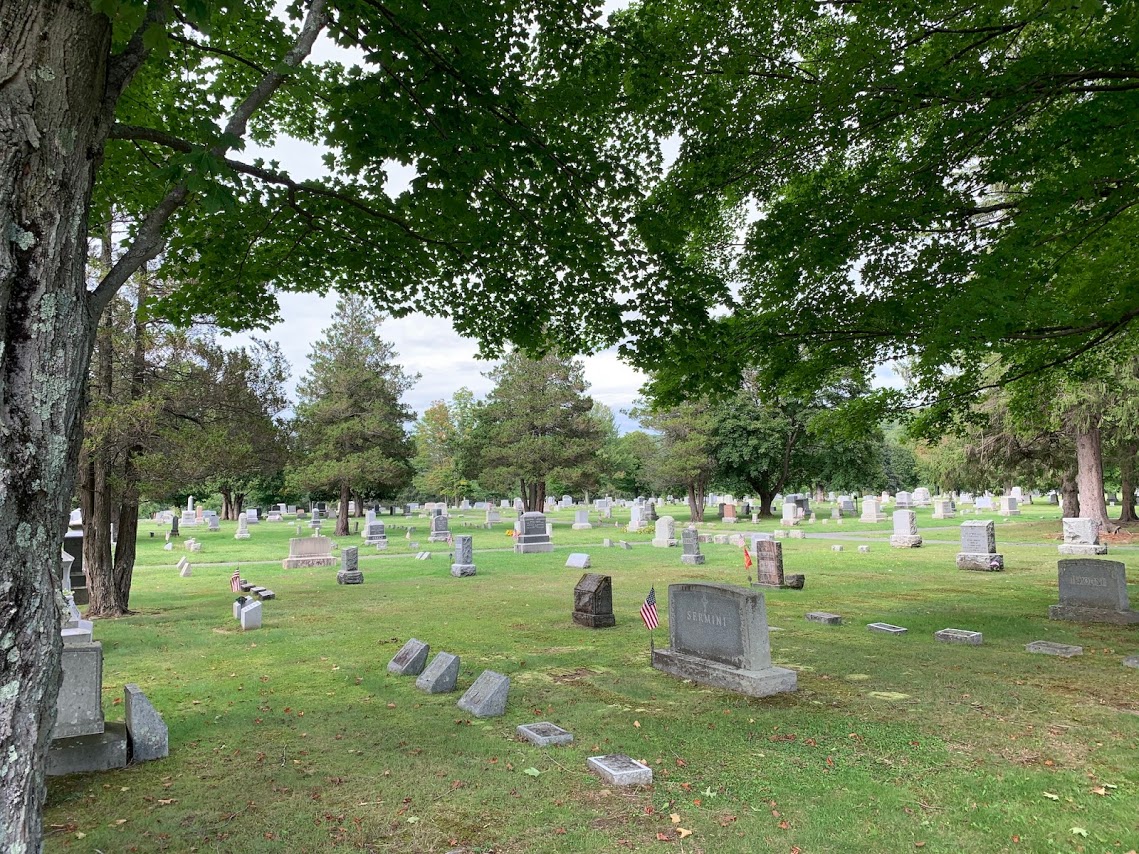 The St. Peter's cemetery on Stockbridge Road. After a change on regulation by town cemetery commissioners, 'green burials' will be allowed. Photo: Terry Cowgill

Great Barrington — If you’ve lived in the area for a long time and wish to be buried in Great Barrington, you can now rest in peace in an environmentally friendly way. That’s because the town’s cemetery commissioners voted on Aug. 26 to approve the practice of so-called “green burials” at the town’s seven cemeteries.

One of the movers and shakers of the approval was selectboard member and cemetery commissioner Ed Abrahams, who had been working on getting the burial regulations changed for the past three years.

Abrahams is Jewish and his wife, Shelley, died in 2007. Jewish tradition calls for a natural burial in which the body decomposes organically into the ground. But town policy did not permit that kind of burial.

“She had wanted a traditional Jewish burial, which was not an option for a lot of reasons,” Abrahams said in an Edge interview, adding that the green burial option also meets the needs of Orthodox Jews, whose burial tradition calls for natural decomposition of the body.

After the commissioners agreed that the regulations might need to be changed, they heard a presentation from Green Burial Massachusetts, a nonprofit that advocates for natural burials, and from local funeral directors.

Conventional burial is the more common method of burial in the U.S. But 90 percent of people elsewhere in the world are buried directly in the earth, according to GBM. Green burial is said to conserve resources and return nutrients to the soil.

According to GBM, in a green burial, the body is not embalmed, and the burial container is made of biodegradable materials or the body is wrapped in a shroud. There is no wooden casket, vault or concrete grave liner. Rather, the container or the body is placed directly within the soil, the hole is covered with topsoil and the body is left to biodegrade naturally.

The green burial is less harmful to the environment. One of the prime contaminants is embalming fluid, which is essentially a chemical cocktail containing formaldehyde, phenol, methanol and glycerin. The fluid is injected into the corpse through an artery in order to slow the rate of decay. An estimated 800,000 gallons of formaldehyde are put into the ground with corpses every year.

According to the Green Burial Council, the U.S. annually uses 20 million board feet of hardwoods (including rainforest woods), 1.6 million tons of concrete, 17,000 tons of copper and bronze, and 64,500 tons of steel. Caskets and vaults leach iron, copper, lead, zinc and cobalt.

According to GBM, Massachusetts state law does not require the use of a grave liner or vault. A private cemetery’s board of directors or a city’s or town’s cemetery commissioners typically develop their own rules and regulations about what kind of burial is allowed in their cemeteries.

“They make burlap shrouds with handles, so you don’t even need a casket,” Abrahams explained. “They also make wicker caskets, so there are simple ways to do a burial now.”

According to Sean Van Deusen, who heads Great Barrington’s Department of Public Works, the town has seven cemeteries. Some are small, hard to find and are no longer active burial grounds.

The largest are the Mahaiwe Cemetery on South Main Street; the Water Street Cemetery near the intersection of State Road and East Street; and the Elmwood cemetery serving the town, St. Peter’s Church and Ahavath Sholom, where Shelley Abrahams is buried.

The St. Peter’s portion of the cemetery is owned by the church. The rest is town-owned. That cemetery tract is also the largest in town and is located off of Stockbridge Road in an area behind the Four Brothers pizza restaurant. There is another cemetery, Greenlawn and St. Bridget’s, in the Housatonic section of Great Barrington.

The only catch is that a green burial requires a one-time fee of $600 payable to the town. The reasoning behind it is simple. A traditional casket placed inside a concrete vault will maintain its shape. A body wrapped in a shroud and placed in a biodegradable casket will lose its shape as it decomposes, which creates a depression in the soil.

“There could be additional settling depending on the materials,” Van Deusen said. “We need to make sure we monitor it for a couple more years to add more topsoil. We can add more material and keep it level and safe.”

That accounts for the fee. However, there are substantial savings elsewhere that more than make up for the green burial expenditure.

“They have to go back several times, really to watch for it to collapse and then when the ground gives way, fill it in, reseed,” Abrahams said of the DPW laborers who take care of the cemeteries. “The bottom line is it saves you a lot of money because the vault and casket are significantly more than $600.”

Joe Roy, owner and funeral director of Birches-Roy Funeral Home in Great Barrington, said a few of his customers have asked about green burials. Now he can tell them it’s a service that his company can offer.

“We’re happy to do it because it allows us to fulfill that family’s wishes,” Roy told The Edge, adding that he definitely plans to offer the service soon. Roy has been researching the subject for a couple of years and attended a meeting of the cemetery commissioners earlier this year.

“For the families that want it, I think it’s a great option,” Roy said.

The commissioners oversee the general conditions of the cemeteries but the DPW handles day-to-day operations such as mowing and trimming the grass and plowing the access roads in the winter. The DPW used to handle the actual digging of the graves but that has since been farmed out to a contractor who reports to Van Deusen.

“They were looking at the long-term future of the cemeteries,” Van Deusen said of the commissioners. “People are just not getting buried like they were before. We wanted to make sure we were out front on that.”

Abrahams said the way the new town regulation is written, green burials will not be segregated to certain parts of the cemeteries. They can occur anywhere a more traditional burial can be sited. That means when the time comes, he can be buried in an environmentally friendly way next to Shelley at Ahavath Sholom.

“In my case, I have a parking space and I can use it and be green,” said Abrahams.