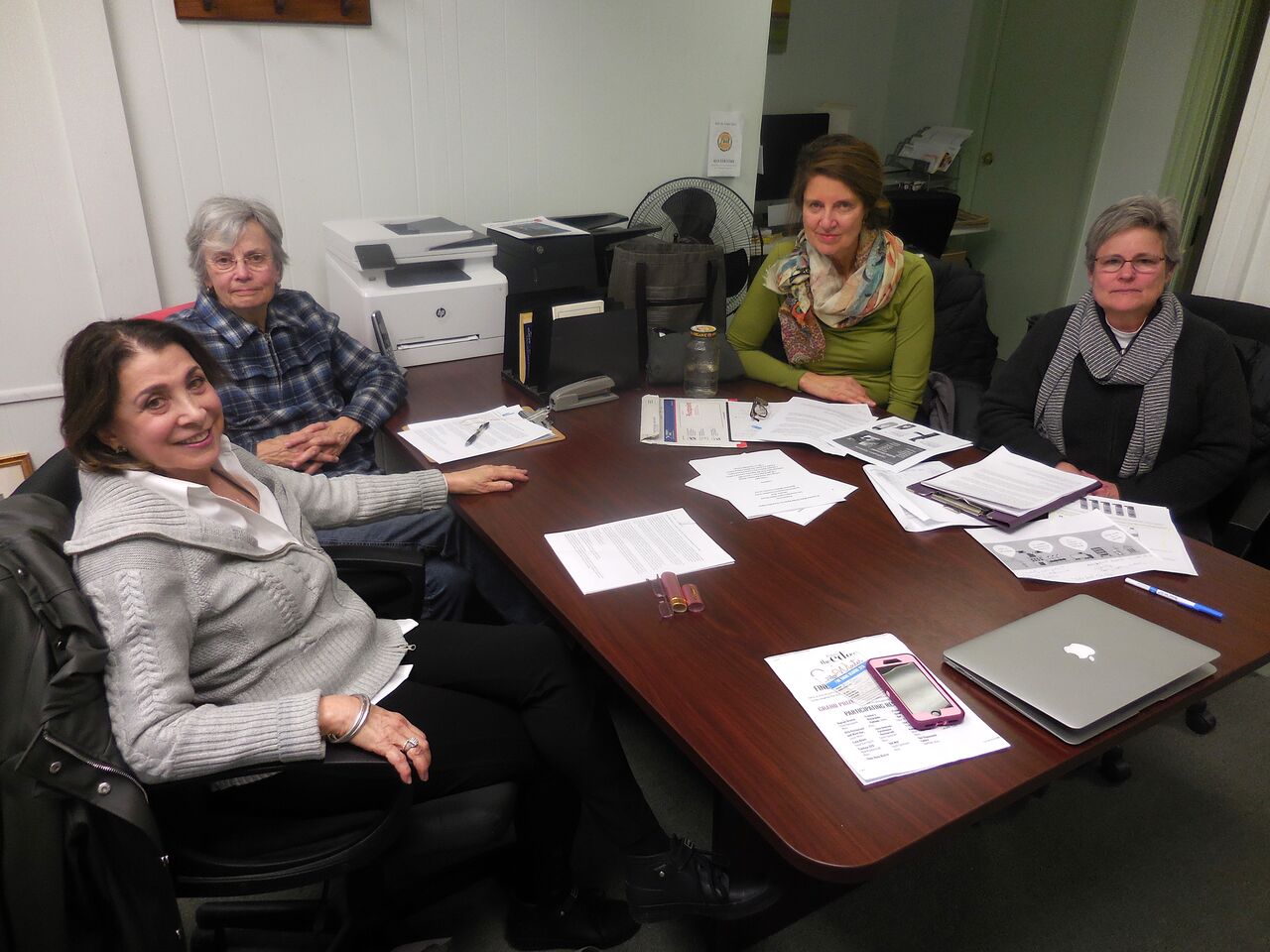 A panel of the Berkshire Women’s Action Group and Indivisible Berkshires has gathered the necessary signatures to put a proposal before voters at the annual town meeting in May to ban the sale of drinking water in small, single-use plastic containers. The ban would extend to single-serve water bottles of 1 liter (34 ounces) or less. Click here to read the proposed bylaw.

The group’s Environment Committee took the initiative to draft a proposal for what it calls the “elimination” of the sale of the bottles. They gathered 30 signatures on a petition and presented it to the town clerk. They only needed 10.

Two of the committee members, Marj Wexler and Marcia Arland, are from Egremont and the other two, Wendy Kleinman and Jennifer Clark, hail from Great Barrington.

The panel sat down with the Edge last week to discuss the proposal. They say they are motivated by a variety of factors, including a desire to reduce waste and combat climate change. They have dubbed the proposal “GB On Tap” after a similarly named initiative, Concord On Tap, that was approved by voters in that eastern Massachusetts town in 2012.

“It’s about sustainability and lowering the use of fossil fuels,” Clark said of her group’s proposal.

“And because there is an alternative,” added Arland. “It’s good-tasting and very inexpensive.”

If it passes at town meeting, the GB On Tap program intends to provide additional drinking fountains and bottle refilling stations throughout town. In addition, it will help participating merchants and restaurants offer refillable water bottles for sale. The bottles will feature the movement’s logo, with the words “refill, refresh, renew” across the front.

A handy map will feature businesses that support the program by agreeing to become individual refill tap water stations for residents and tourists. The map will also highlight places where drinking fountains or bottle-refilling stations can be found. Clark says participating businesses will likely see an increase in foot traffic and customer volume.

The ban on plastic water bottles would not extend to larger containers such as the common 1- and 5-gallon jugs; nor the kinds of jugs you see at the office water cooler, for example.

Clark pointed to an array of research and data indicating:

As for why the group isn’t pushing for a wider ban on similar plastic bottles containing soda pop and sports drinks, for example, Clark said, “We’d love to go further but this is a start.”

It remains to be seen whether retailers will put up a fight if the plastic-bottle ban passes. Five years ago, Great Barrington joined what eventually became dozens of other communities across the state in banning the use of thin-film shopping bags with handles that so many supermarket and drug stores use to collect purchased goods for consumers to take home.

The ban on single-use thin plastic bags was approved by a clear majority of taxpayers at the annual town meeting in 2013 and survived a legal review by the state attorney general’s office the following year.

Officials from the town’s major retailers–Big Y and Price Chopper–privately told reporters they were not thrilled with the new law because it limited customer choices. Art Ames, then the general manager of the Berkshire Co-op Market, fully embraced the new law.

In 2016, Big Y began selling thicker reusable plastic bags that complied with the new bylaw but the company discontinued the practice after the selectmen complained that it ran afoul of the spirit of the bylaw.

The Edge reached out to Mona Golub, vice president for public relations and consumer services at Price Chopper for comment. She did not respond to a message over the weekend.

After passing its ban on plastic water bottles, the town of Concord also enacted a bag ban similar to the one in Great Barrington. Last year, a similar bottle initiative passed in nearby Sudbury and it even survived a subsequent repeal attempt initiated by the owner of a coffee house who insisted the water-bottle ban would hurt his bottom line and curtail his customers’ freedom of choice. The new law will take effect in July.

One Sudbury resident contacted by the Edge, environmental activist Nicholas Pernice, said he and many other town residents will scarcely notice the plastic water bottle ban.

“I won’t really notice it because, for years, I have worked out pretty regularly and use a Nalgene,” Pernice said, referring to a refillable, wide-mouth, nontoxic plastic water bottle.

Pernice said the Sudbury-Concord area, though suburban, is much like the Berkshires and is unusually environmentally conscious. Pernice is a member of Protect Sudbury, which is battling Eversource and the MBTA over the electric utility’s plan to place high voltage power lines along an inactive railroad corridor through the town of Sudbury and its conservation lands.

Sudbury is located near Concord’s Walden Pond, where transcendentalist writer Henry David Thoreau lived for two years in a cabin on its shore and was inspired to write his most famous work, “Walden.”

“I’m all for what they did,” Pernice said of his fellow Sudbury residents. “This is one step in the right direction for everybody, don’t you think?”

The bottled water industry reacted swiftly to the Concord action, telling the Boston Globe that “Any efforts to discourage consumers from drinking water, whether tap water or bottled water, is not in the best interests of consumers.” One selectman who supported the ban nonetheless voted against it because she was concerned that the town would have to “spend scarce public resources on legal fees defending it.”

On the other hand, the Massachusetts Food Association, an industry trade group, said its members support reducing plastic waste but would prefer a statewide approach so that municipalities are all on a level playing field.

Interestingly, in light of the recent activism of students after this month’s mass killing at a Florida high school, the Sudbury proposal found its way onto the annual town meeting warrant because student members of the Lincoln-Sudbury Regional High School Environmental Club petitioned to get it on.

Asked why, in this era of sugary soda pop and high-calorie energy drinks, her group would want to do anything to discourage the healthful consumption of water, Clark replied:

“Sparkling and flavored water are not limited for sale under this bylaw. Also, still water in containers larger than 1 liter is not limited. Some merchants may choose to dispense water through a filtering machine and sell that water at a lower price but with a higher margin of profit.”

Arland also pointed to a 2016 survey at Washington University in St. Louis showing that sales of bottled beverages of all kinds actually dropped 39 percent after 2009, when the university became the first in the nation to ban the sale of single-use plastic water bottles.

Clark, who traveled recently to Concord to meet with the activists involved in the plastic-bottle ban there, also reiterated several other relevant facts put out by Concord On Tap and the Sierra Club:

This is to say nothing of the expense to consumers of the bottled water. According to Concord On Tap, Concord tap water costs .0007 cents a pint. Bottled water costs roughly 1 dollar a pint.

“For the price of a bottle of water, you can have 1,500 large glasses of Concord tap water,” the organization states on its website.

Ironically, the push to ban the plastic water bottles locally comes only a few months after the administration of President Donald Trump lifted a restriction on the sales of bottles in several popular national parks. That partial ban had been in effect since 2011 to encourage visitors to use tap water and refillables instead.

As was the case with the plastic bag ban, violators of the water-bottle bylaw would be fined and enforced by town manager Jennifer Tabakin or whomever she delegates the task to. See graphic below:

Clark said she has spoken to four of the five Great Barrington Selectboard members and has been encouraged by their reaction. She also made a presentation at a recent budget deliberation meeting of the selectboard and the Great Barrington Finance Committee.

None of the members of Clark’s panel had a clear sense of whether the measure would pass at town meeting. But they are planning a marketing campaign that might include emails, social media and other outreach.

“We might even be out on the streets,” Clark added.

See video below, “The Story of Bottled Water,” by the Story of Stuff Project: