First of all, thank you for considering my allocation amendment proposal last night. Although the result was not what I was hoping for, I appreciate your taking the time to debate it. You have embarked on a thoughtful and deliberate process that should benefit our schools and the communities they serve. 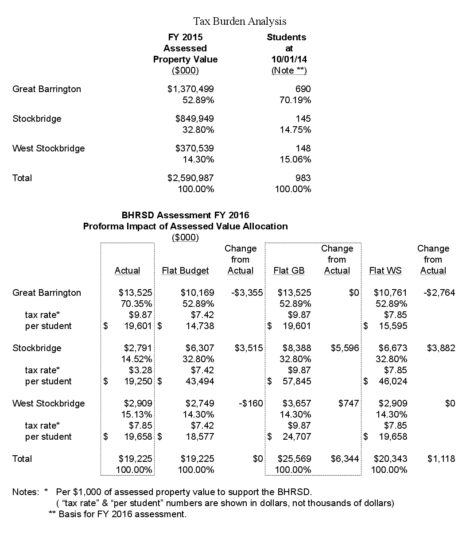 During the discussion (which I mostly couldn’t hear due to technical difficulties with the phone connection), I was asked one question that I could only answer generally. I would like to follow up now with two answers – one that is numerically specific, and one that is philosophical.

The question was what the per-student cost would be to each town under my proposal. The numeric answer is shown in the spreadsheet at left. Beginning with the “Actual” column, you can see that all three towns are essentially the same: West Stockbridge is highest at $19,658, Stockbridge is lowest at $19,250, and GB is $19,601 (the minor variation among towns is caused by the influence of the statutory Minimum Local Contribution formula). The effect of adopting the assessed value allocation method (see the “Flat Budget” column) would be to cause the West Stockbridge per-student cost to drop to $18,577, the Stockbridge cost to rise to an eye-popping $43,494, and the GB cost to drop to $14,738.

The philosophical answer is that the question is based on a misunderstanding of how public education is actually financed in our District. Stockbridge wouldn’t pay $43,494 per student; in fact, none of the three towns would pay anything, just as they don’t really pay anything now. As in just about every other part of the country, public education is financed through property taxes. In some states, like New York and Ohio (and most others, I think, but I haven’t done a state-by-state survey), the taxes are billed directly by the school district. In Massachusetts, the taxes are collected by the towns on behalf of the school district, but the towns are just a conduit. The payers are overwhelmingly individual homeowners, who are also the voters who approve the annual District budget. The fact that a $1,000 unit of property abutting the GB/Stockbridge line on the GB side is going to pay $9.87 next fiscal year, while a $1,000 unit on the other side of the line is going to pay $3.28 is – in my opinion – an embarrassment for the most liberal county in the most liberal state in the country. Cost per student is how private education works, not public education.

I heard someone suggest that Stockbridge could get a better deal from a neighboring school district, but I would like to point out that – as I learned when briefly toying with the idea of something similar for GB – any withdrawal by any member town requires unanimous approval by all three town meetings. Furthermore, any withdrawn member remains on the hook for any debts of the District incurred to date. Bottom line: we’re all in this together, and any solution needs to be collaborative and mutually acceptable.

For this thoughtful and deliberate process on which we’re now embarked, we should be proud that we’re all members of the excellent Berkshire Hills Regional School District, regardless of our town of residence.