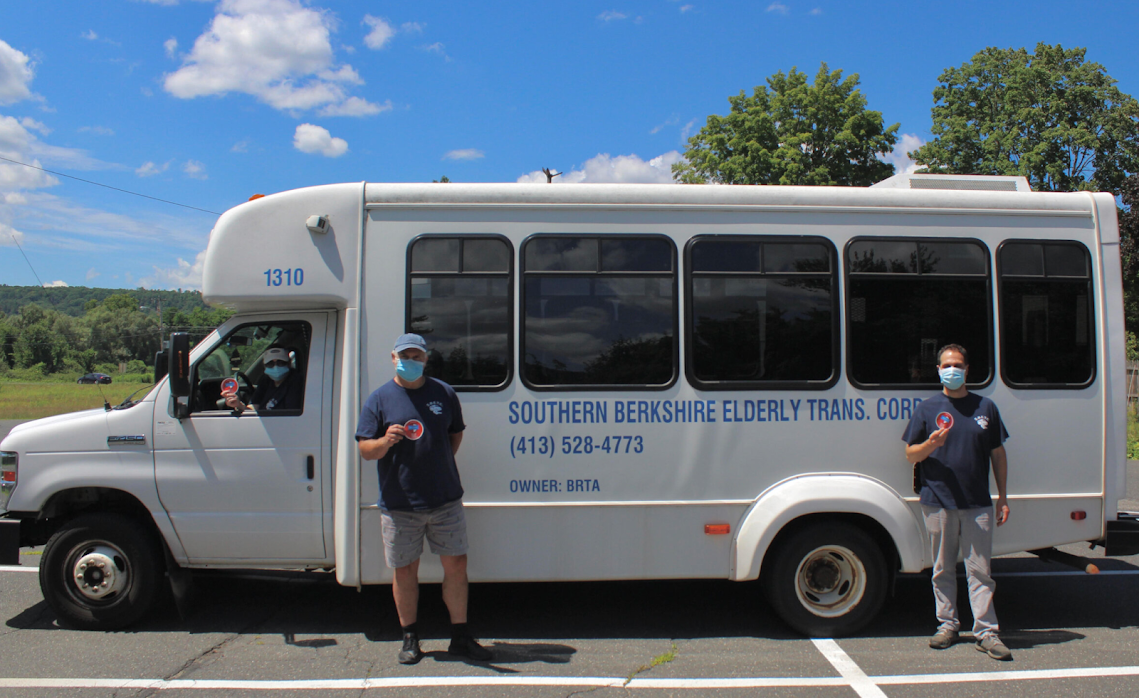 Editor’s note: Since publication of this story, the town of Great Barrington has issued a news release with additional details, and SBETC director Dawn Valinaggi  has sent us a letter to the editor.


Great Barrington — A beloved service used by hundreds of vulnerable senior citizens in the region will be shutting down at the end of the month — the victim, it appears, of the COVID-19 pandemic and of some level of contractual discord with the town of Great Barrington and its senior center.

Such was the sentiment of Southern Berkshire Elderly Transportation Corporation director Dawn Valinaggi, who wrote a Sept. 3 letter to clients, colleagues and friends informing them, “with a saddened heart” that SBETC “will no longer be providing transportation services to you.”

“This very difficult decision was made due to COVID-19 along with the changing vision that the Town(s) we serve and the Director of the Claire Teague Senior Center have about senior transportation,” wrote Valinaggi. The last day of service will be Wednesday, Sept. 30.

Based at the Claire M. Teague Senior Center in Great Barrington, the nonprofit corporation was founded in 1984. SBETC’s minibuses and vans pick people up at their homes for transportation to and from their destinations — often doctor’s appointments and shopping venues. The program’s service area includes Great Barrington, New Marlborough, Monterey, Otis, Sandisfield, Alford, Mount Washington and Egremont.

Valinaggi, who has run the program for the last 16 years, did not return a message seeking comment. Click here to read a recent interview with Valinaggi by GB S.A.F.E. The program is funded through private donations, state grants and through fees paid by member towns. Passengers also pay a per-trip fee. Click here to view SBETC’s IRS 990 form containing financial information and the names of board members.

The program is open to anyone 55 or older or anyone with a disability of any age. Vans pick people up at their homes for transportation to and from their destinations. Drivers have also been known, if invited, to enter the homes of passengers and help them tie their shoes or assist them in putting away their groceries.

The abrupt decision has caught all those towns by surprise and has left them scrambling for alternatives. Great Barrington is by far the largest town and hosts the SBETC’s offices in a town building.

In an Edge interview, town manager Mark Pruhenski said negotiating a new contract this year with SBETC “has been a challenging effort.” About halfway through a six-month contract the town had signed with SBETC, the organization shut down in mid-March when the pandemic hit. There was no warning and no effort on the part of SBETC was made to help towns find other alternatives.

“That was not, as far as I’m concerned, our responsibility,” he said. “I wouldn’t want to be in a position where I had to explain to the selectboard or the public why we paid for several months of services we did not receive.”

In addition, the state Department of Revenue prohibits municipalities from paying for services they did not receive, Pruhenski explained. Pruhenski then reached out to the town of Sheffield, which operates its own service, and it offered to pick up the slack for Great Barrington while SBETC was shut down.

The town had been paying approximately $60,000 annually for SBETC’s services, not including the fees paid by passengers. Pruhenski is convinced that a town-run program, which he is going to propose to the selectboard next week, can be run for approximately the same cost. There can be savings, for example, through seniors serving as drivers and receiving tax abatements for their labor.

The new town-run elderly and disabled transport program will start the day after SBETC shuts down. It will be managed by the Great Barrington Council on Aging and the senior center and its staff.

“I want to assure our elderly and disabled population that we will provide services on Oct. 1,” Pruhenski said. “It may not be a perfect service on Oct. 1, but we’ll have something in place to get them to and from medical appointments, grocery shopping, pharmacies.”

Pruhenski said his initial goal is to cover the needs of residents of Great Barrington and Housatonic. There might be opportunities for shared services with other towns down the road. The goal, he said, is not necessarily to duplicate the SBETC service but to make it better.

“Right now, as it stands, there’s no hours on weekends, and hours are limited even on weekdays, so we hope to eventually expand on it,” he said.

Rene Wood, who chairs the Sheffield Board of Selectmen, said the SBETC shutdown “wasn’t defensible because no one received any warning, from what I understand. There were no backup plans, no anything.”

Wood added that her town was happy to help out Great Barrington during its time of need, and that “there is potentially the opportunity for Great Barrington and Sheffield to work together on this, too.”

Before starting its own program, Sheffield was one of the towns served by SBETC, but Sheffield opted out in favor of running the elderly transportation program through the Sheffield Council on Aging.

“We dropped out six or seven years ago because we just weren’t getting the service or the value for what we were paying for it,” Wood told The Edge. “We just did a simple analysis … We didn’t feel there was a true partnership.”

Of Great Barrington’s plight, Wood said, “If that had happened to us, it would have left a really sour taste.”

State Rep. William “Smitty” Pignatelli, D-Lenox, said he sees the loss of SBETC as “an opportunity to make the service better.” In terms of shared services, no legislation in Boston would be necessary. All that would be required is a memorandum of understanding between the interested towns.

“We have an opportunity to keep something very positive afloat,” said Pignatelli, adding that he would be happy to facilitate a discussion. “That senior center is a lifeline, but the only way it’s a lifeline is to get them transported there. I would not encourage any of the small towns to start their own program. I would encourage them to agree to have a conversation about what a new model would look like.”

Pignatelli also urged the towns to reach out to Elder Services of Berkshire County, a nonprofit elder services organization based in Pittsfield.