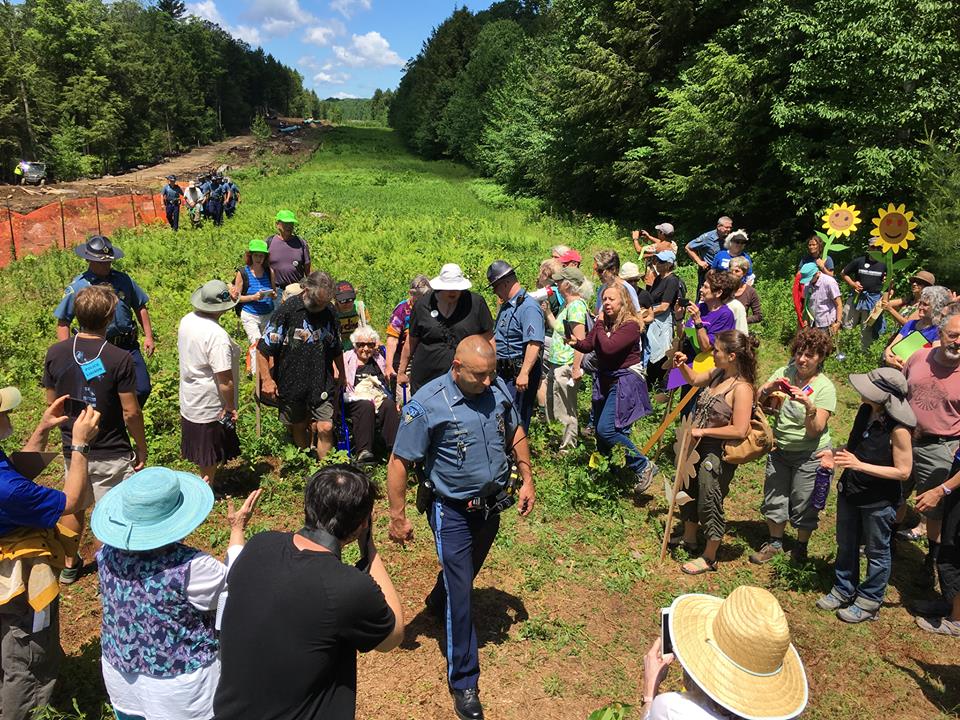 Sugar Shack Alliance
In the background State Troopers lead protesters off to their arrests, while others in the foreground await their fate during a demonstration against Tennessee Pipeline Company's new Connecticut Expansion Project through Otis State Forest. It is the latest in a series of protests against the fracked natural gas pipeline network, and more generally, against reliance upon fossil fuels.

Sandisfield — Eight demonstrators were arrested for trespassing on Saturday (June 24) for refusing to leave a restricted area at the site of the Tennessee Gas Pipeline Company’s (TGP) pipeline extension project off Cold Spring Road in Sandisfield, State Police have confirmed.

Police said those arrested were among a group of about 80 protesting the project, which is adding four miles of natural gas pipelines which is being added in parallel to two existing pipelines. The protest activity by a group of demonstrators, many of whom are members of the nonprofit protest group the Sugar Shack Alliance, was peaceful.

The arrests were made without incident. Those arrested were transported to the Berkshire House of Correction where they were booked and were expected to be released, police said.

Earlier in the day. Sugar Shack had been staging what it called the Funeral for the Age of Fossil Fuel by carrying a coffin out onto Tennessee Gas Pipeline’s easement to obstruct construction of the $93 million pipeline. Within half an hour, all seven were arrested, including 98-year-old Frances Crowe. 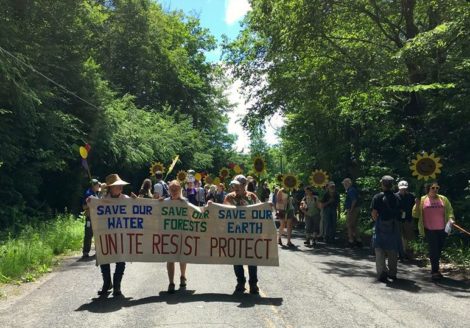 Sugar Shack spokesperson Abigail Ferla told The Edge, “Earlier in the day, as if to dispel the popular myth that environmentalists never have any fun, the activists gathered at Lower Spectacle Pond in Otis State Forest with a singing group called the Casquettes, a bicycle hearse, coffin, and a man in 9-foot polar bear costume to gleefully bid farewell to the Age of Fossil Fuels.

“The funeral service, which began and ended with a procession down Cold Spring Road, was officiated by Northampton resident Linda Putnam. Taking suggestions from the crowd, Putnam cast into the coffin such phenomena as ‘individual and corporate greed,’ ‘colonialism,’ and ‘oil spills’.”

Crowe, a former peace activist during World War II who has been arrested numerous times, most recently protesting the Vermont Yankee Power Plant, addressed the crowd from her wheelchair at the Otis State Forest: “And this is where energy lies, in people power, wind, and solar.”

After the final procession, eight activists carried the casket onto the TGP easement and set it down in the path of construction vehicles.

“They join 23 others from the alliance who have been arrested in the past two months resisting the Connecticut Expansion Project in Otis State Forest,” Ferla said.

“I chose to be arrested today to show respect for our elders — especially Francis Crowe — our resolve to resist, and to stop this pipeline from being finished,” said protester Dennis Carr, one of those arrested. 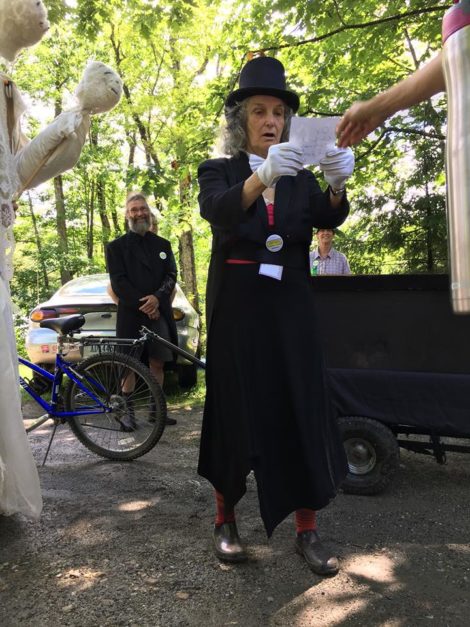 The Sugar Shack Alliance describes itself as a coalition of activists from around the region “firmly rooted in the principles of nonviolent direct action and peaceful resistance to fossil fuels.”

Sugar Shack is trying to stop ongoing operations to clear almost 30 acres of publicly owned forest to make room for a controversial natural gas pipeline expansion to Connecticut that many of its detractors insist is unnecessary  and environmentally destructive.

Ferla said Sugar Shack has recently called on Massachusetts Gov. Charlie Baker to make Massachusetts a leader in clean energy and block the construction of any new fossil fuel infrastructure projects in the commonwealth.

These most recent arrests follow 18 others were made in two separate incidents on May 2, with six more arrested May 6.

A pair of hearings have been held over the last two months in Southern Berkshire District Court on the charges, which Judge Paul Vrabel has reverted from criminal trespassing to civil. But no determination has yet been made  on the guilt or innocence of those charged.

“The police chose to arrest me today because I was standing in the way of the construction of an illegal pipeline,” Carr said. “There has been no evacuation plan provided for the people, the thinnest pipes possible are being used, and it was my civic duty to do everything in my power to stop this dangerous, unnecessary pipeline.”

“As the song they sang walking the coffin down Cold Spring Road proclaims, ‘The tide is rising, and so are we,'” Ferla told The Edge.

Many of the Sugar Shack protesters, most of whom are from outside Berkshire County, have been a near-constant presence at the site, even going so far as to erect a “Thoreau Cabin Pipeline Barricade” on the abutting property of Sue Baxter, who is a member of Sandisfield Taxpayers Opposing the Pipeline (STOP).

Ferla said they have been released on their own recognizance with hearings next Tuesday at the Southern Berkshire District Court in Great Barrington.