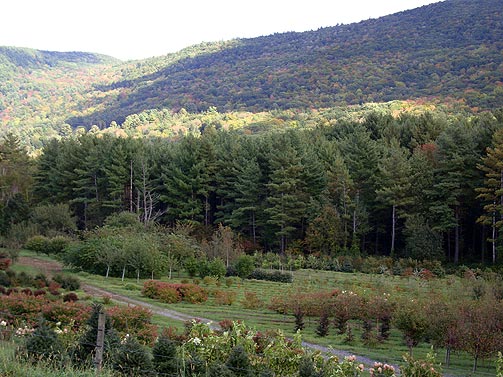 Eight CPA projects worth $776,000 before GB voters at Town Meeting

Great Barrington — If the town’s voters agree, Windy Hill Farms apple orchard on Route 7 will forever be out of the reach of developers.

The town’s CPA money comes from a 3 percent surcharge on a portion of property taxes.

While this year more than half the funds will go to applicants for two affordable housing projects due to “immediacy” and “need,” the remaining funds will go towards several historic preservation projects, the creation of trails, restoration work to the Housatonic River Walk, and something a little different this year: an agricultural preservation restriction (APR) for 40 of Windy Hill Farm’s 73 acres. The remaining acreage is considered “unbuildable,” according to the committee.

The committee said it would recommend adding $170,000 to the state Department of Agricultural Resources’ (DAR) purchase of Judy and Dennis Marebs’ land to preserve, into perpetuity, the highly successful 30-year-old orchard that also features a popular pick-your-own apples and blueberries business, sells plants and provides landscaping services. The farm is one of the first things people see when driving into town from the north, and provides jobs and general beauty that is the hallmark of the Berkshire landscape. The idea is to keep Windy Hill a working farm forever. 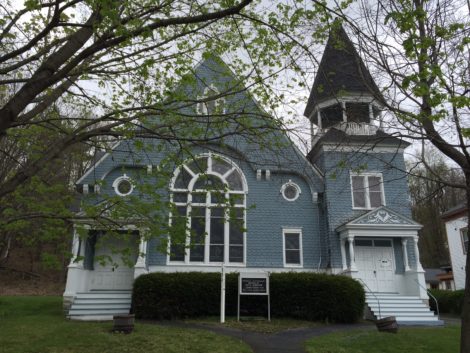 In Housatonic the Unitarian Universalist Meeting of South Berkshire that is on the National Register of Historic Places would also receive a CPA grant. Photo: Heather Bellow

The Marebs could get a lot more money on the market, said committee chair Karen W. Smith. “Three to four times this if they were to sell it outright.” Smith also said the land would continue to be taxed at the agricultural rate. The Marebs’ originally asked the committee for $200,000.

The land is in a high-value area making it good pickings for future developers.

DAR had the land appraised at $946,000 for fair market value, and the DAR committed $558,000 to purchase the property’s development rights. The CPA funds will represent 18 percent of the total to go to the Marebs, money that will help bridge the gap between what the state was willing to pay and what the land is worth.

Berkshire Natural Resources Council (BNRC) stepped in to help the Marebs apply to the state when it learned they wanted the APR. BNRC’s Naraian Schroeder told the Edge the Marebs were making a sound decision. “If you want to plan your land for the future, you do it while you can,” he said.

BNRC is also going to raise $40,000 to contribute. The Marebs are also chipping in to help make this happen.

“The Berkshires values its agricultural resources and Great Barrington values its farms,” Schroeder said. “This farm is at the entrance to town, it’s scenic, and a highly productive agricultural endeavor.”

At a November 2015 meeting where the project was discussed at length, committee member Martha Fick said “30 years of orchard growth” was worth preserving. “You could get big bucks for houses there if you were a developer.”

The conditions set by the committee were that the town must be a co-holder of the restriction; that the money will only be released when the APR sale closes with the state; and that the money be returned to the town if for any reason the sale does not close. 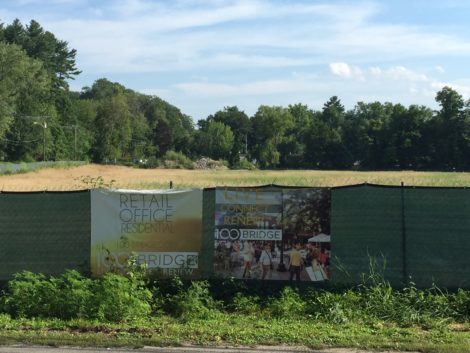 The 8 acres of 100 Bridge Street would provide badly needed affordable housing, according to the Community Preservation Committee. Photo: David Scribner

The committee focused the bulk of the $800,000 they had to spend on what they agreed were critical affordable housing projects — $220,000 for one at 316 State Road and another for the future 100 Bridge Street development at the former Log Homes site, which the developer says will happen no matter where the rest of the development stands. 100 Bridge still does not have an anchor business, which Community Corporation of Southern Berkshire Executive Director Tim Geller says is necessary to the retail and office aspect of the site.

But Geller has told The Edge and town officials that the entire development is still in the works, and the affordable housing portion is in line for its state funds which will go into the pot with the CPA money. The site is set to be capped to contain dioxins in the soil, after a bioremediation project was shut down by the state last year.

Then there are smaller projects: $24,250 for electrical work at the Wheeler Farmstead, the future site of the Great Barrington Historical Society and a town museum, and Historical Commission survey work for $15,000 that will update and digitize the town’s historic records.

Community Health Programs (CHP) got approved for $10,000 to build a one-mile hiking loop that will begin at their parking lot off Route 7. It will be open to the public and is intended as a tool to help patients.

One project, while recommended by the committee, hit a few public nerves. The Unitarian Universalist Meeting of South Berkshire, as a National Register of Historic Places structure, needs significant structural repairs, including basement waterproofing and masonry work, chimney repairs, and structural reinforcement of the roof. The committee said it would give $60,000 for this, while the UUMSB is throwing in $10,000 of its own funds.

After Housatonic resident Michelle Loubert complained about what she thought may be a misuse of public funds in what she said was a separation of church and state issue, the committee contacted the state CPA official and legal counsel. The state considers this an appropriate use as long as the project is considered a “public benefit,” according to the committee, and “historic preservation is considered a public benefit under CPA law.” In this case, the UUMSB is also used as a community gathering place, is a village landmark, and this work will help keep it from falling apart.

A number of conditions were set for the release of these, and all funds, for all projects.

Dennis and Judy Mareb could not be reached for this report.

For more detailed information about all the projects and CPA funds go to the committee’s report for Town Meeting.

For a copy of the Great Barrington Annual Town Warrant that lists all the items to come before the voters on Monday, May 9, click here.