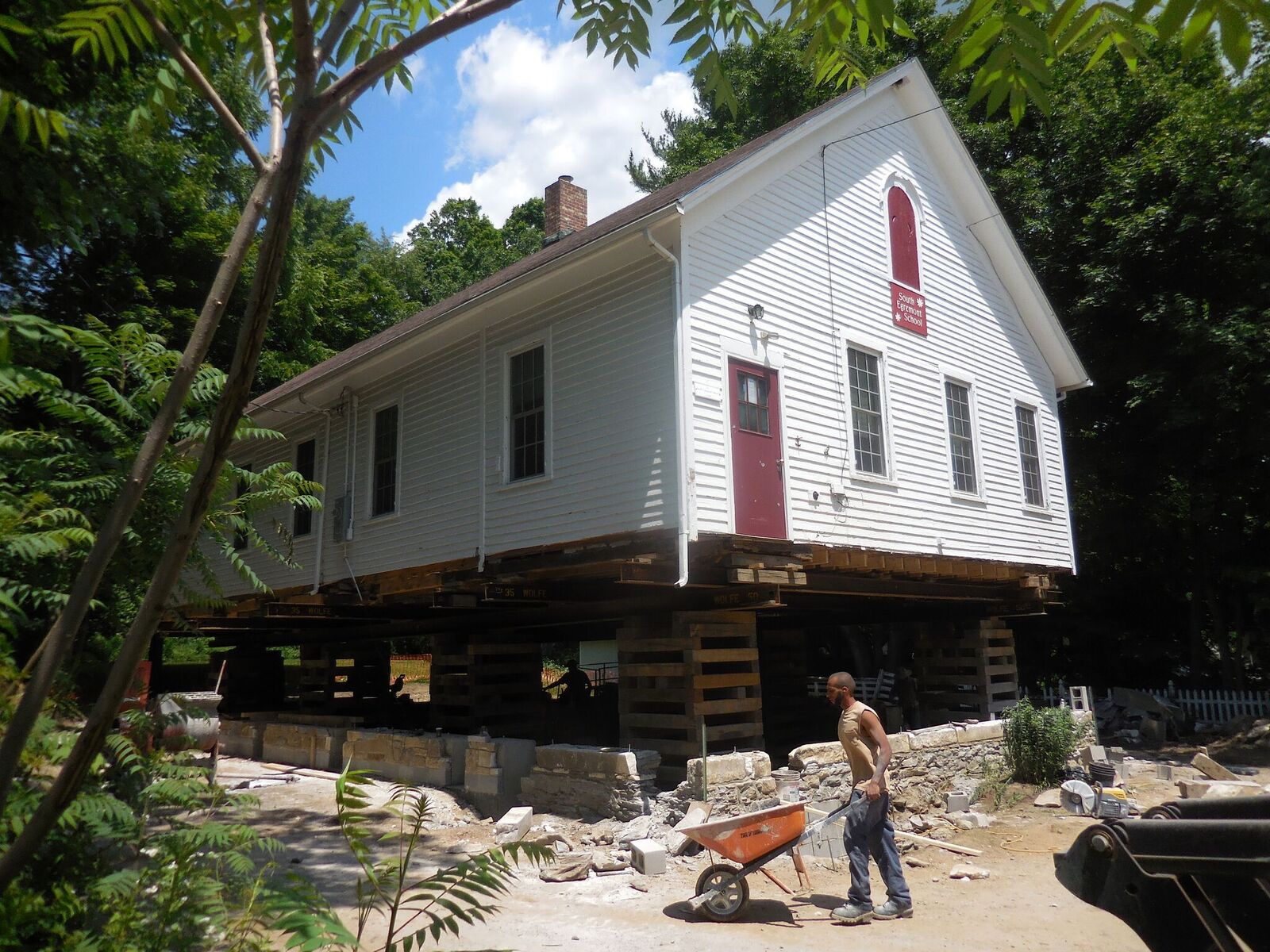 A worker from Salco Construction Company Inc. in Pittsfield wheels material around the exterior of the Egremont Village School. Photo: Terry Cowgill

Egremont –– It’s been a long, strange trip but, if all goes according to plan, Egremont’s “flying school” will come down to earth next week and, by the end of August, will be filled with eager schoolchildren.

The tiny one-room Egremont Village School has been closed for the 2017-18 school year while it underwent renovations, mostly to the crumbling stone foundation that dates back to the original construction of the building in 1880.

“It’s been saved,” said Susan Bachelder, who chairs the Egremont Historical Commission and has been a leader in the movement to preserve the school. “The town has understood the value of this as an historical element and as an ongoing operation.”

The work, the cost of which totals some $358,000, includes not only the replacement of the foundation but removal and replacement of an old fuel tank, restoration of the playground and, eventually, the necessary work to bring the building into full compliance with the Americans with Disabilities Act.

The general contractor is Salco Construction Company Inc. of Pittsfield. Click here to see the conditions assessment document from 2013. Bachelder said a representative from the state historical society is expected to visit the site on Monday.

The project was funded by an initial grant of $50,000 from the state historical commission, which recently kicked in another $25,000 on an emergency basis to replace faulty sill plates that were causing portions of the old foundation to sink. The rest of the money for the project came from town surplus funds, so-called “free cash” and even some private donations.

“We’re moving forward and expect to be ready for children well before the school year, if not sooner,” said Bruce Turner, who chairs the board of selectmen. “I’m pretty excited about the way it’s going.”

The building has a controversial history, especially over the last couple of years. It’s in the village’s National Register Historic District and was one of the last one-room schoolhouses in continuous operation in the nation.

The Southern Berkshire Regional School Committee had attempted to put the school “on hiatus” in 2016. In response to that, the town of Egremont filed a lawsuit alleging the school committee had violated the regional agreement that required a formal procedure to be followed for closing one of the three so-called “outlying schools”  —Egremont, Monterey and New Marlborough Central — located outside the district’s main campus in Sheffield. Click here to read the 26-page legal complaint.

The school committee voted to settle the lawsuit last June, agreeing to either fund the school or begin the process of formally closing it through a series of public hearings and approval in separate votes in four of the five member towns, as stipulated in the regional agreement, which dates to 1953.

“Shame on the school district,” said Turner, a former school committee member and former business administrator for the district. “They were the custodians of that building.”

The issue of closing schools has been a contentious one in the Southern Berkshire Regional School District. At its annual town meeting last year, Egremont taxpayers rejected the SBRSD budget, as did Monterey, where the school committee had executed a school closing two years ago. However, the Monterey School remains closed as an educational facility.

Last year, outgoing Superintendent David Hastings sent an email to New Marlborough Central School parents informing them that, the following year, only students residing in New Marlborough or Monterey will be provided with direct transportation to NMCS.

That move was seen by some as an attempt on the part of the regional school committee to lower enrollment at NMCS and undermine it so that the school could be closed, or put “on hiatus,” as the community schools in Monterey and Egremont were.

As for what kind of program will be in the Egremont facility this year, Mary Brazie, a member of the board of selectmen and the town office administrator, told the Edge the building will house pre-kindergarten and kindergarten.

Brazie said the number of students is not clear because registration is not yet complete, but officials are confident it will be at least 10 students. In its last year of operation, there were 15 students in first grade and kindergarten, seven of whom choiced in from other districts.

Brazie attributes the lower population to confusion among the public as to whether the school will be open or whether it is even viable as an educational facility.

“There has been so much misinformation about the status of building,” Selectman George McGurn added. “My dream is to have 15 students. I think we’re up to eight registered.”

“We took the bull by the horns,” Brazie said, adding that she has been told by workers that they have found an artifact dating to 1862, though they have not yet told her exactly what it is.

McGurn, who was elected last year, campaigned as an advocate for preserving the building, though not necessarily as a school. He was surprised and delighted to hear about the extra $25,000 from the state historical commission. While acknowledging that the commissioners “do good work,” he quipped that “they’re not known for their generosity.”

McGurn also told the Edge that the school will have an additional program that could prove to be a drawing card: a volunteer-driven afterschool program that provides activities and childcare until 5 p.m.

He said the program could be a powerful marketing tool for working parents because the children “will have the option of staying until 5.”

“It’s been a great community builder,” McGurn said of the school project.

“From a historical perspective, it’s pretty exciting,” Bachelder said. “We’ve saved the building for a good 50 years going forward. Our little school will be rocking.”