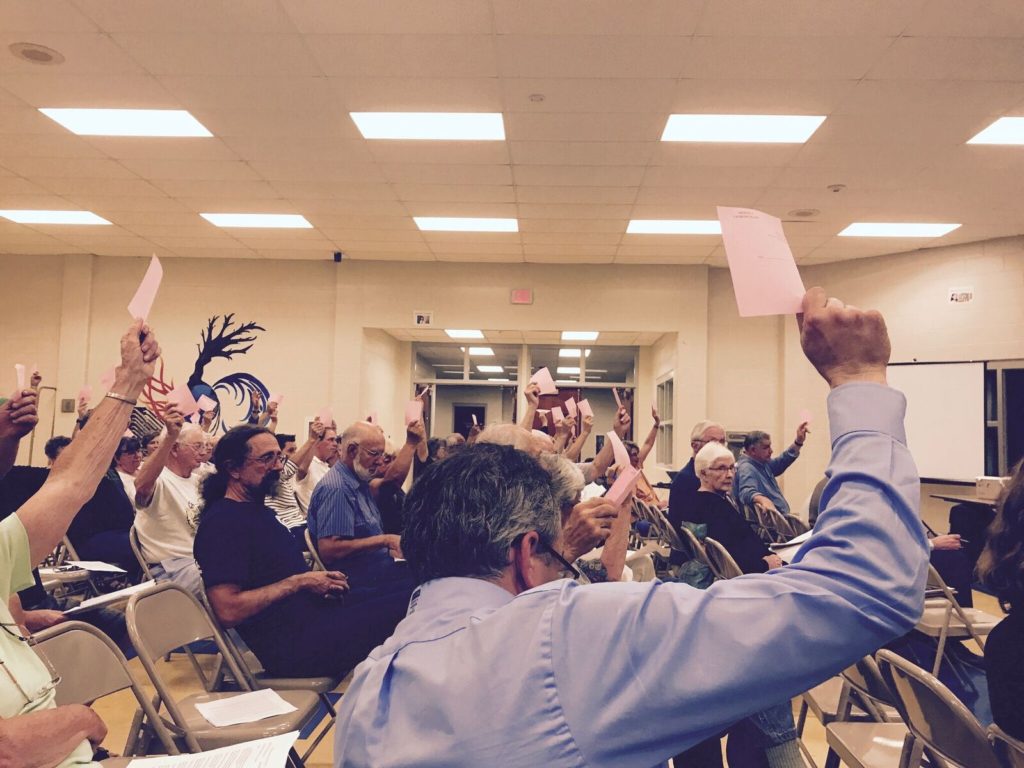 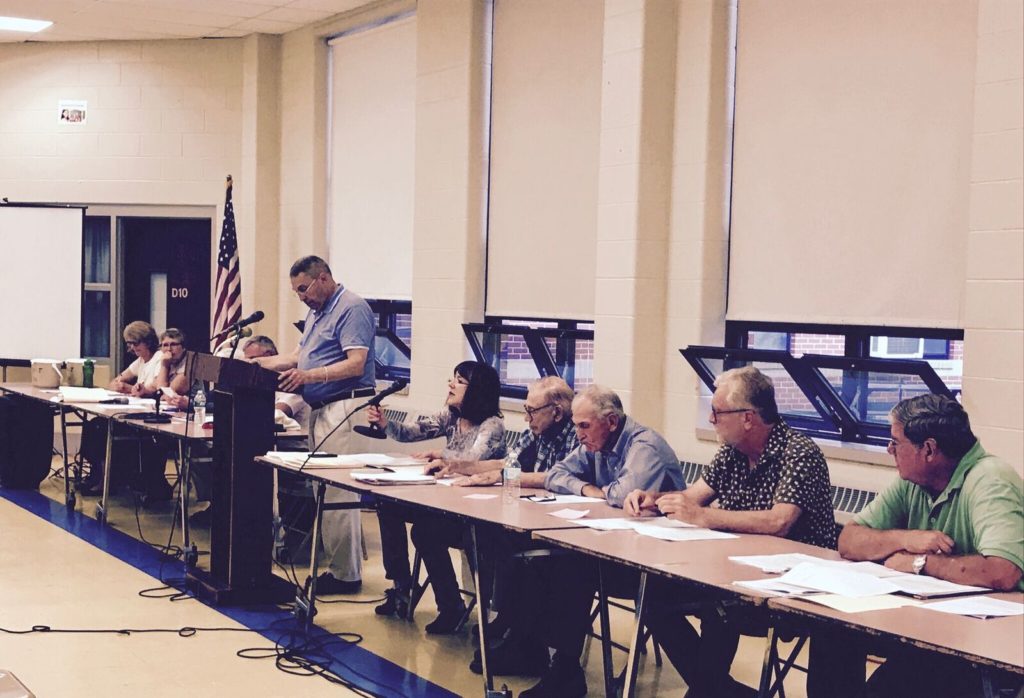 Moderator Steve Cohen, with town officials on his left and the town finance committee on his right, opens up the meeting to a vote. Photo: Victor Feldman

Sheffield — In a special town meeting Thursday night, June 22, the residents of Egremont voted unanimously to adopt and fund their share of the new Southern Berkshire Regional School District budget.

Sixty Egremont residents, the minimum needed for a quorum, raised their pink slips in the cafeteria of Mount Everett Regional High School to cast their votes and bring an end to the debate surrounding what had become a contentious issue.

To pass, the school budget required four out of the five towns in the school district to vote to approve it. Egremont had initially voted down funding its share last month. As Alford, New Marlborough and Sheffield had already voted in favor, Egremont was the last town needed to pass the budget. Monterey residents, who earlier had rejected their share, will vote on funding the district in a special town meeting Friday, June 30, the last day of the current fiscal year. 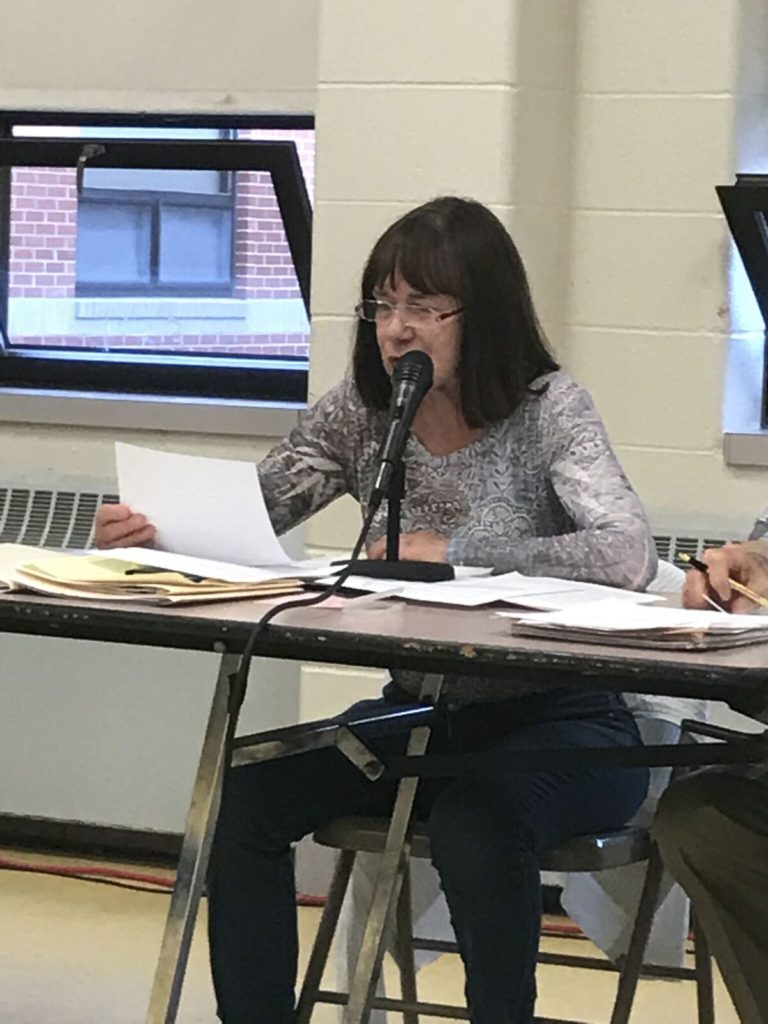 Now Egremonters have committed to contributing their share of $1.5 million towards the overall $16 million budget for the regional school district’s operating and transportation costs, which is actually a 2 percent reduction from last year. Despite overwhelming support for the budget and a 5–0 recommendation from the town finance committee, Laura Allen, the committee chairwoman, acknowledged in her opening remarks that, “While I believe that there are ways the school budget could be reduced without adversely affecting the quality of our children’s education, my colleagues and I are voting for the operating and transportation budget because we think it’s time to move on for this year and tackle the problems next year.”

The vote took place in the context of a legal dispute between the Egremont Board of Selectmen and the school district. As previously reported by The Edge, on June 18, the Southern Berkshire Regional School District settled a lawsuit filed by the Egremont selectmen out of court. While the settlement simply means that the school committee will now have to follow the guidelines in the district agreement before withholding funding from any community schools, as it did this year with the South Egremont Village School. The settlement may have helped smooth over the heated issue of the school budgets and clear the way for Thursday’s unanimous vote.

An historical analysis of the new budget shows that student enrollment in the SBRSD has declined roughly 17 percent in the last five years, but the overall budget has expanded over this time and will grow roughly half a percent – or $73,036 – from the last fiscal year. A notable factor for this was the increase in local transportation costs, which rise almost 2 percent each year. 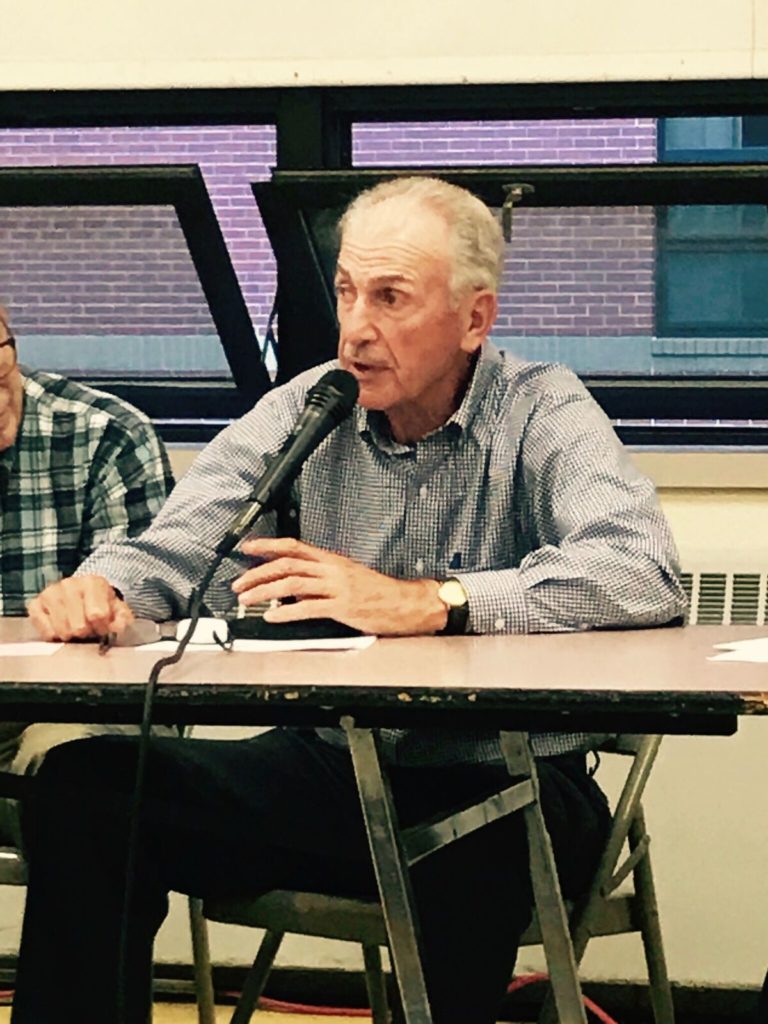 Ultimately the new budget redistributes the contribution each town will be expected to make toward the total budget. Monterey and New Marlborough will see 4.5 and 5 percent increases while Alford, Egremont and Sheffield will have their payments decreased by 10, 2, and 1.5 percent respectively. The towns’ shares are based on their respective enrollment numbers in the district’s schools and a state formula determining a minimum contribution.

At the special town meeting, the attendees also voted to approve three other articles with almost unanimous support. The first vote was to authorize $47,676 for the town’s share of the school district’s capital costs. The second was a vote to raise $55,000 for the purchase of one dump truck for the highway department. The last approval was a vote to transfer $3,700 to be used toward the purchase of a police cruiser for the police department.

The fifth and final article on the agenda — a proposal to raise $535,500 for the engineering costs of reconstructing Mount Washington Road – was postponed until the next annual town meeting. Finance committee member Ed Scarbro concluded, “What worries me is that there are only 60 people here. It’s not a fair representation of this town. When we have a (regular) town meeting, we will have far more people for a fair vote on this.”