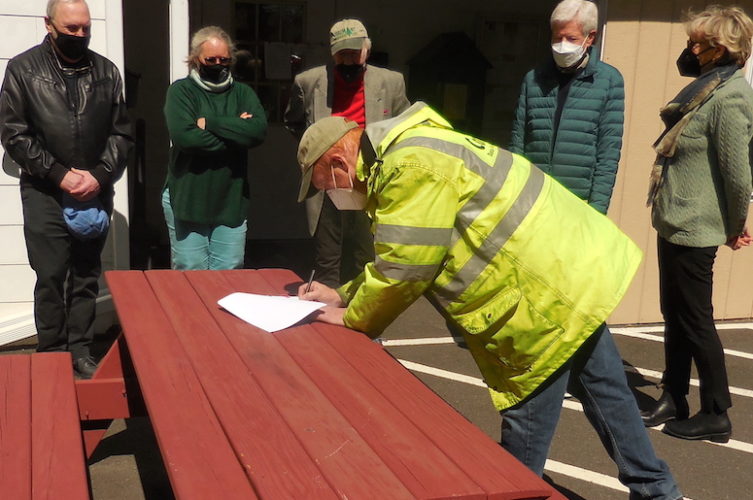 EGREMONT — Town officials were all smiles this morning as they signed an agreement with a local broadband provider to extend coverage to the more remote portions of Egremont.

On hand at a brief ceremonial signing were selectboard members George McGurn, Mary Brazie, and Lucinda Vermuelen, along with Fiber Connect of the Berkshires (FC) CEO Adam Chait. The quartet signed the Fiber Connect–Town Broadband Fiber Network Construction and Operation Services Agreement, which spells out the terms of FC’s work to extend broadband internet service to the remaining unserved areas of Egremont, town officials said in a written statement.

The pact follows the signing of a grant award agreement between FC and the Massachusetts Broadband Institute earlier this month that was a prerequisite to today’s signing. The event was held just outside Town Hall, in compliance with town COVID protocols, and was attended by Egremont Technology Committee co-chairs Jeff Lazarus and Rolfe Tessem.

See video below of town officials and Fiber Connect CEO Adam Chait signing a Construction and Operation Services Agreement this morning in front of Town Hall:

Town officials said one of the provisions of the FC–Town agreement is that FC will offer a 50% promotional discount on installation charges to all Egremont residents regardless of location within the town — even locations already cabled — who sign up within six months of the effective date of the agreement, which is today.

Chait said the discount also applies to any residents in the unserved areas who sign up prior to construction passing their homes, even if such construction takes place after six months from the effective date of the agreement. Currently, the published FC residential installation charge is $999; the promotional charge will be only $499.

For customers in existing service areas who sign up under the promotional terms, installation will be done in “batches” for efficiency, meaning that actual connection may be held up until there are enough customers in a specific area to make it feasible to send an installation crew at the reduced price.

Officials said all questions about FC services and pricing should be directed to the company at sales@bfcma.com or 413-429-4109. The Town has no further information about FC pricing other than what is available from FC.

The FC–Town agreement had been approved by all parties in December but had to await signing until details of the FC–MBI grant agreement were finalized on April 14. The FC–MBI agreement covers the $2 million state grant that will pay for the network construction costs to unserved areas of Egremont and Monterey. There is no cost to either of the towns.

Notwithstanding the timing gap, however, town officials say FC “has been hard at work on the project in anticipation of today’s signing.” Crew members have already completed most of the design and engineering functions and have already submitted all utility pole license applications.

Indeed, the company has already received most of the “make-ready” estimates back from National Grid and Verizon. Make-ready is a utility company process to bring their poles into regulatory and code compliance, where needed, and prepare them for attachment of FC’s cables. Timing of make-ready work is controlled entirely by the utility companies and generally can take up to six months, sometimes more, officials said.

State permits are required in areas where cabling must cross state property, which in Egremont’s case primarily affects access to residents on Brookvale and Hilltop Roads in South Egremont. FC has already initiated the permitting process. Although this is a matter between FC and the state, town officials say they will help in any way possible to expedite the process. No make-ready timeline is available at this time.

In 2017, as part of its “last-mile” initiative, MBI provided Charter-Spectrum with a grant of more than $4.4 million to defray the costs of wiring the rural towns of Egremont, Tyringham, Hancock, and Peru. Egremont, which was already in the process of being wired by Fiber Connect, initially agreed to Charter’s proposal but withdrew when the company told the selectboard it would cost $600,000 more than was agreed upon to install the fiber optic communications network for town residents.