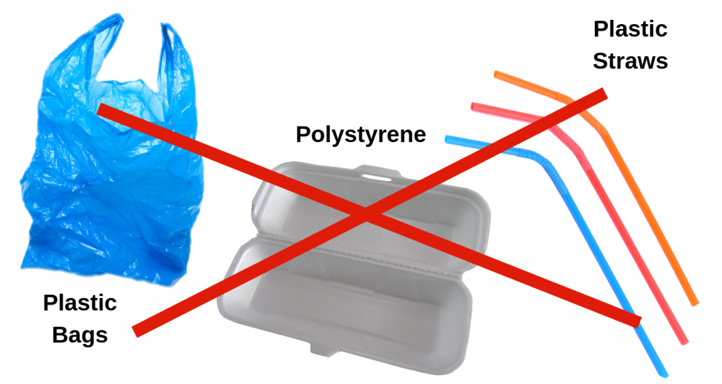 Egremont — “Let’s start with the dreaded single-use plastic,” the Oct. 1 email said. “For this month, see if you can avoid using any plastic bags, polystyrene take-out containers, plastic water bottles, and plastic straws.” 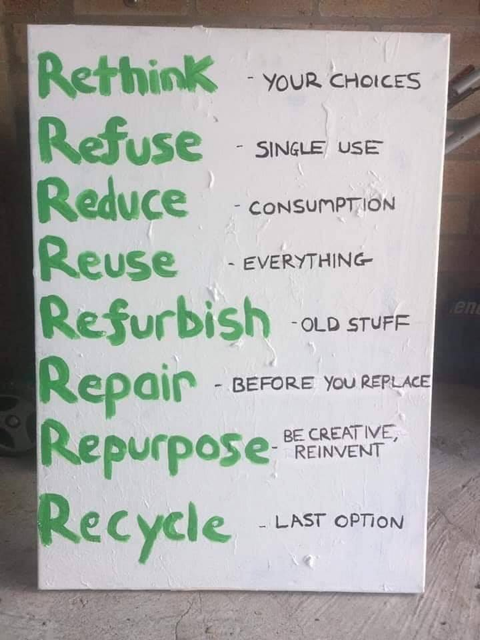 Every day last month, the more than 90 people who had had replied “yes” to the Egremont October Plastic Reduction Challenge invitation — distributed by the Egremont Green Committee via a community email list — received such a tip.

The challenge had the elements of other online cessation drives: tips, raffle prizes, group support, open chat and a party at the end. But this one targeted the excess plastic that finds its way into our garages, refrigerators and pantries even as news spreads about the dire consequences of plastic pollution, including to human health.

“Try bringing a reusable PRODUCE BAG with you when you grocery shop,” said the second day’s email, on Oct. 2. “WHY: A single plastic bag can take 1,000 years to degrade.”

Thirty-one tips at a glance

Many of the emails provided a mini briefing on a particular item or topic, but here is the complete list on just a boiled-down, bullet-point basis. 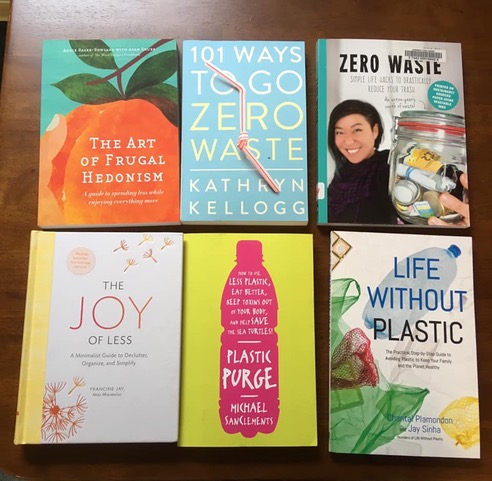 Books that Egremont’s librarian, Lesliann Furcht, coordinated with the challenge.

As a perk of joining the challenge — no money required — participants were entered into a daily raffle drawing, with a winner announced in each email. Prizes were designed to help break the plastic habit: bamboo toilet paper; facial tissue and paper towels; a copy of “The Art of Frugal Hedonism: A Guide to Spending Less While Enjoying Everything More.”

Juliette Haas, Egremont’s sustainability coordinator and founder of the Egremont Green Committee, handled the process of picking winners. At Town Hall, she or a coworker drew members’ names from a jar.

Hinda Bodinger, an Egremont resident who spearheaded the project, either contributed the prizes or arranged for their donation from three local supermarkets. (Thank you to Guido’s, Big Y and Berkshire Food Co-op!) 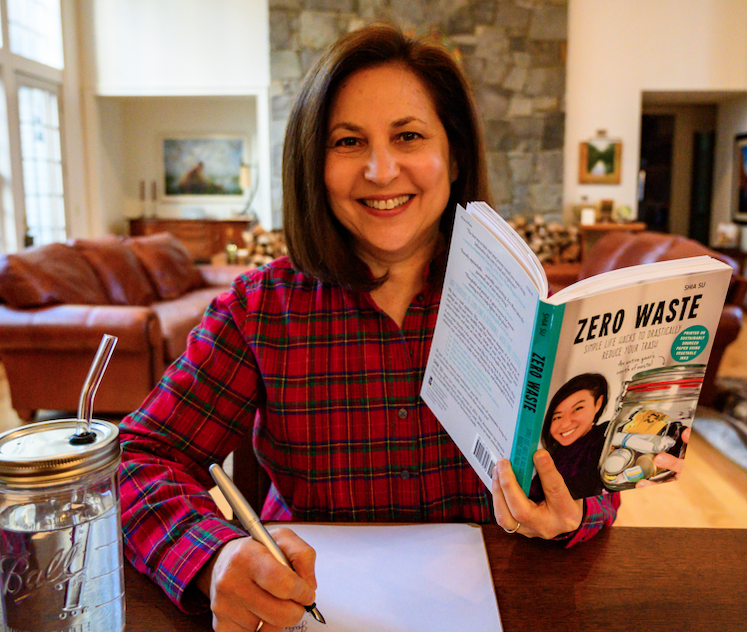 Last summer, Hinda asked the Green Committee to host the challenge. She’d begun making changes in her own lifestyle: making her own hummus instead of buying it in plastic containers, using an old-fashioned cartridge pen instead of a plastic throwaway. She’d been generating excitement about all this through her Facebook page (Plastic Free 413) and was full of infectious enthusiasm.

“Ok,” we said. “Let’s do it.” Hinda and a couple of other committee members set to work. Thirty-one emails and 31 raffle prizes later, Hinda sounds happy about the project. “I definitely learned A LOT!” she wrote in an email.

Participants in the challenge traded questions and answers.

“What’s the trick to freezing, say soup, in mason jars without them breaking due to expansion?” one participant emailed. “Underfill them,” came a reply, “and don’t put on lids until frozen solid.” Hinda followed up with a link providing more detailed advice on that subject.

One woman wondered if local coffee shops would be willing to fill your own cup if you brought one. “Fuel in GB happily filled my travel mug with coffee yesterday,” answered Marj Wexler, chair of the Egremont Green Committee, who created and hosted the Google group for the challenge. “No problem.” 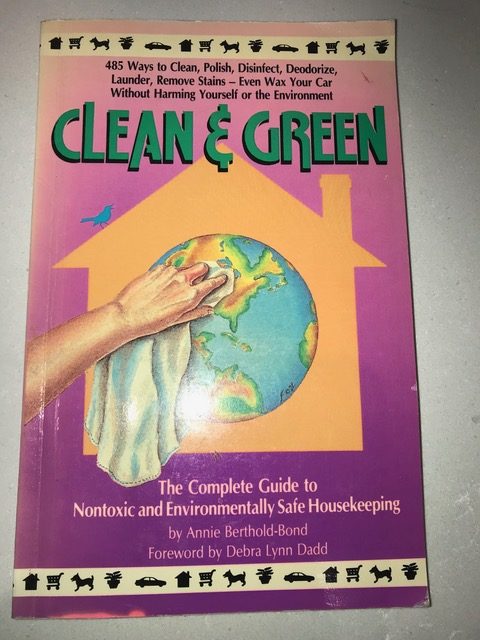 A participant found this book while unpacking after a move. ‘Copyrighted in 1990 and published in Woodstock, NY! Time to crack it open & try some of the recipes,’ she wrote.

Marj also recommended visiting the The Last Plastic Straw. Under the site’s “Take Action” tab, you can find a little card. Print it out and you have a little note to leave behind on restaurant tables asking managers to stop automatically providing plastic straws with drinks. “This is particularly helpful if you don’t feel like being confrontational at a restaurant that brought the straw before you thought to say no thanks.” Marj wrote. “I carry the little pieces of paper in my wallet and have used them.”

The challenge joins an emerging shift in consumption habits in which people around the world — from Boston to rural India — are looking for ways to consume less plastic.

Despite such efforts, the worldwide problem of plastic proliferation is intensifying. While Europe has been restraining production, the global trend is steadily upward. In the U.S., major new plastic-producing infrastructure is being built, including outside Pittsburgh and along the Gulf coast.

Locally, however, and even nationally, encouraging legislation is being enacted.

In our area, Great Barrington banned plastic shopping bags more than five years ago. Since then, other much larger municipalities have followed suit. New York City has banned them, although implementation is pending. Eight states, including New York, now have bans in place. Some places use taxes to discourage plastic bags. 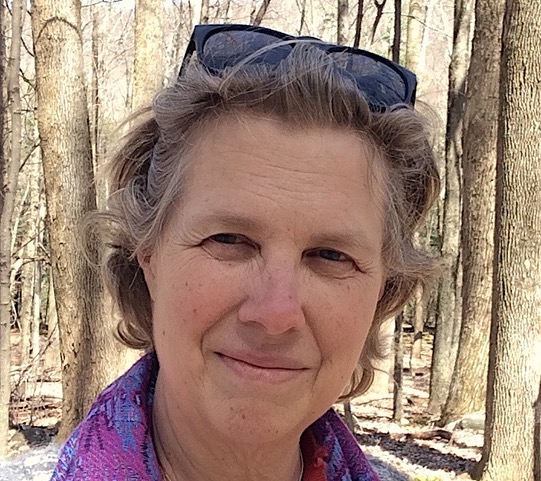 Corinna Barnard, author of this article, is a member of the Egremont Green Committee.

Last year, Great Barrington banned the sale of small, single-use plastic beverage containers, reportedly becoming the first town in Berkshire County — and the third in the U.S. — to do so. Enforcement just began Nov. 1. The ban was accompanied by measures to assist and encourage people to use their own (preferably stainless steel) containers. Two refill stations are now operable, at the Great Barrington Town Hall and the Housatonic Community Center, aka the Housie Dome. A third refill station was recently installed at Great Barrington’s Mason Library.

As for the Egremont October Plastic Reduction Challenge: The daily tips stopped at the end of last month, but the Google group and conversation remain open and ongoing. New members are welcome to join; just email us at egremont.green@gmail.com.

For some participants, the challenge provided a boost to their existing efforts to avoid plastic.

“I do love the way this group has inspired me to rethink many of my practices,” one woman emailed Marj, “though I thought I was being watchful.”

“I love the psychological support of this group,” another woman wrote her. “It’s effective.”

But for many others, the challenge was eye-opening.

“Thank you,” one woman wrote. “It is so interesting–that there are many items we used to use every day and did it out of pure ignorance. Great to be educated by our community.”

“This project was definitely not just preaching to the converted,” Marj said recently, in looking back. 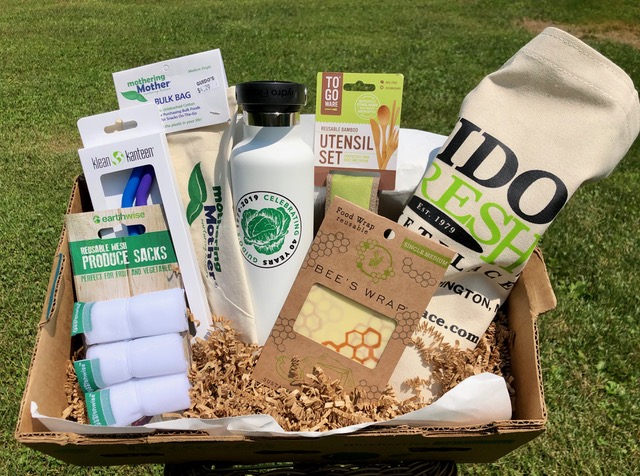 The Egremont Barn, our live-music locale, generously provided the venue for the celebration wrap-up party, when the grand prize — a Guido’s gift basket valued at $125 and packed with plastic-alternative products and aids — was raffled off.

It was a Sunday afternoon. Strong winds the night before had downed some trees. Power outages had occurred. It was good to gather in a warm place, share impressions and discover how the challenge had spread far beyond the borders of Egremont.

Emily Eyre, an Egremont Green Committee member, said that while she’d been in New York City for the month pursuing her work as a musician, she’d posted the challenge, along with the daily tips, on her Facebook page. Somewhat to her surprise, her friends and colleagues had jumped in.

Another participant said that her daughter, who lives in New Zealand and teaches high school, had been sharing the daily tips with her students. “That’s practically on the other side of the world.”