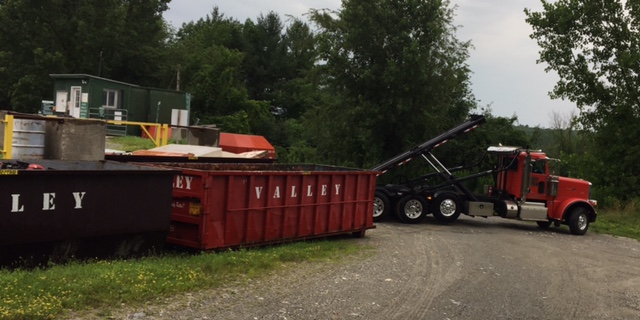 Valley Roll-Off pulling the construction and debris dumpster from the Egremont transfer station.

Egremont — In early July, Egremont joined many other cities and towns across the U.S. in proclaiming our support for the Paris Climate Accord, a set of voluntary, international targets for reducing greenhouse gases.

Around the same time, after devising various ways to divert things from our trash heap over several years we were excited to discover that we had hit a milestone. As we on the Egremont Green Committee were hoping in our last column, the town’s annual trash — not our recyclables, just the other stuff — fell below the 400-ton mark for the first time since we started tracking this figure several years ago. It weighed in at 390 tons for the fiscal year ending June 30, a 19 percent decline from 2012.

Kudos to our residents! Let’s hope we have more good waste-watching news in the months and years ahead.

Cutting back on trash certainly aids climate targets. Landfills spew methane and other greenhouse gases, and the trucks required to haul the trash emit carbon dioxide and congest the roadways. 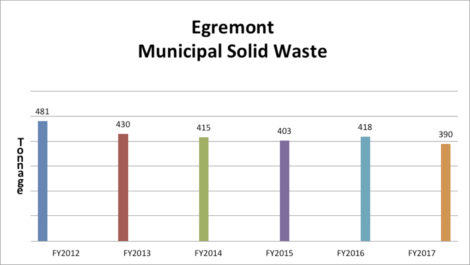 Each month our waste hauler, Valley Roll-Off of Lee, pulls away the various dumpsters and provides detailed invoices that tell us the weights of the loads, measured at either the Valley plant or the Springfield Materials Recycling Facility, affectionately known as “the MRF,” pronounced “murf.”

There are six dumpsters at our Transfer Station:

For each type of dumpster, the town pays a hauling fee of between $150 and $250. Since that is just for transporting the dumpster, it saves money if we can cram as much as possible into each load and limit the number of trips. Crushing a gallon plastic milk container under your foot and squishing out the air is one way to help.

But of all these dumpsters, the one we watch like a hawk is the MSW dumpster. That’s the one for regular household waste with nowhere else to go: greasy pizza boxes, broken plastic gadgets, cracked rubber hoses, plastic packaging, Styrofoam meat trays, dirty diapers and sacks of chicken bones and other kitchen scraps that aren’t allowed in the town compost bin.

The town pays a disposal or “tipping” fee for MSW dumpsters based on the weight of the load. (The materials in the MSW dumpsters go either to a landfill or to the Covanta Pittsfield waste-to-energy plant about 30 miles away.)

On the other hand, we don’t pay a tipping fee for the recyclables (bottles and cans, paper and bulky rigid plastics) that go to the Springfield MRF.

Furthermore, recyclables earn money because of their value down the line. Rates fluctuate, but we’re currently getting about $15 a ton for recyclables. Last year, Egremont earned $2,500 from the Springfield MRF.

The contents of our metal dumpster go to the salvage yard at Formel Motor Co. in Great Barrington. The town received $1,850 for metal in the past fiscal year.

Now, of course, the question is, how can we further cut both our waste and our costs?

As always, public compliance with the state’s recycling laws and recommendations will be the key.

And in the year ahead, the town plans to add collection systems for propane tanks, single-use/alkaline batteries, mercury thermostats, and film plastic. Watch this space for more news about these measures as we strive to implement and publicize them.

Do you have comments, ideas, questions or recommendations for future articles? Please write to us at egremont.green@gmail.com