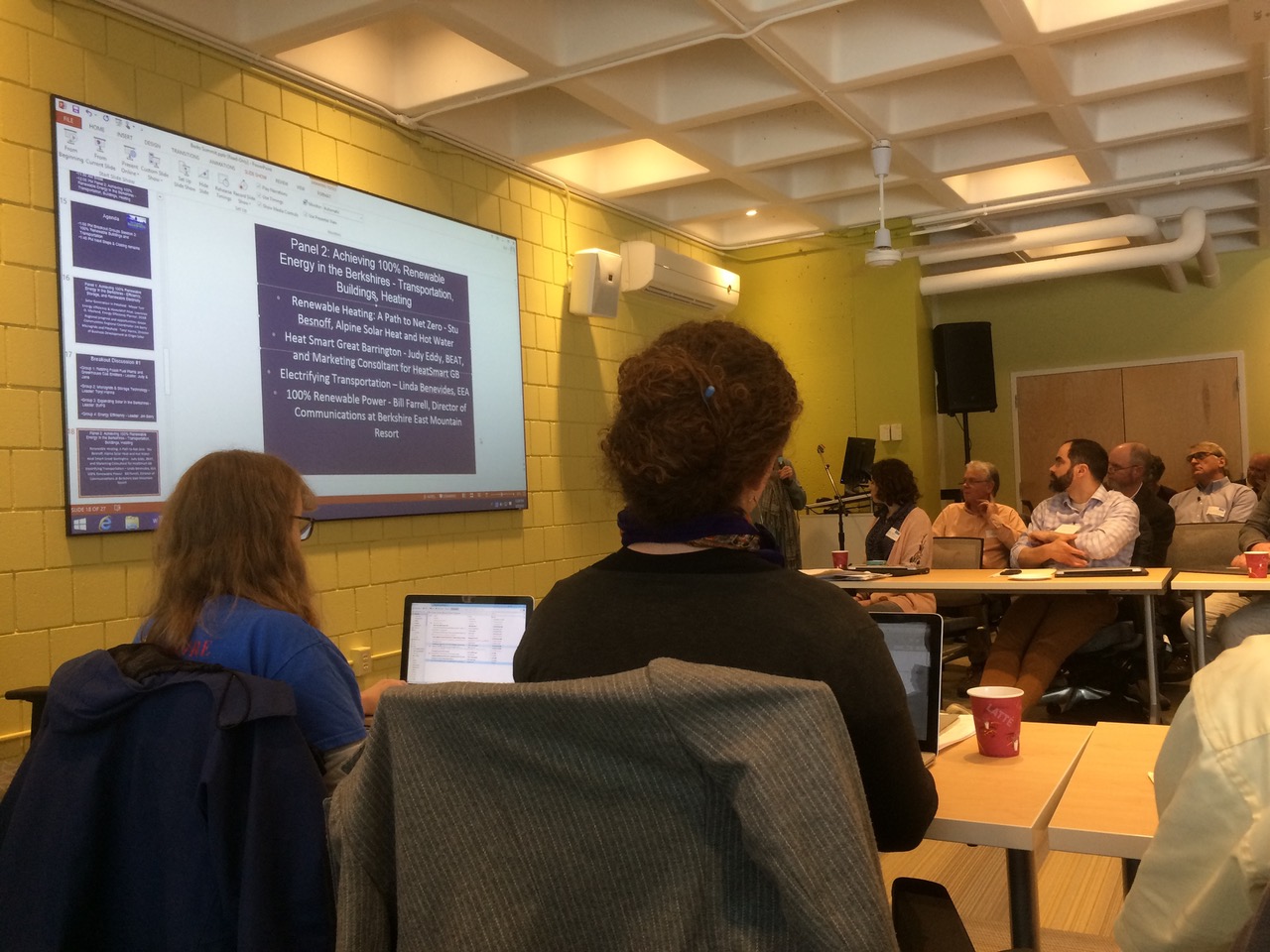 Egremont — Earlier this month, an Egremont Green Committee delegation attended a local conference on how towns and cities are setting high goals for increasing their use of renewable energy for electricity, heating and transportation. We came away with a bundle of information about initiatives in our area and around the world.

But first, a sampling of the hands-on tips we learned to help save money while conserving energy.

The place to start, speakers said, is by stopping drafts and making sure you are using your existing energy sources as efficiently as you can. This can be challenging in many of the older buildings in the Berkshires. However, several programs can help home and business owners. The Mass Saves program, run by utilities, offers free energy audits and no-cost products such as LED lights, advanced power strips and air sealants. It also offers rebates on qualifying energy-efficient heating, cooling and water-heating equipment. Check the website or call 1-866-527-2283. You may want to consider a zero-interest loan for energy-efficient home improvements, or a savings of up to 75 percent on installing insulation. Note that energy efficiency audits can be repeated every few years, since technologies and benefits change.

Purchasing electric vehicles or charging stations, meanwhile, is being made more affordable by incentives from the Massachusetts Department of Environmental Protection federal tax credits. Go to mass.gov and search DEP or EVIP (Electric Vehicle Incentive Program) for more information.

Towns, meanwhile, can boost renewable energy solutions. An electric vehicle, electric heat pump or solar hot-water heater is especially green if powered by renewable energy. Egremont is among the towns participating in these bulk-purchasing agreements, which can save residents money on electricity while they offer opportunities to purchase from renewable sources. It’s an option available to any town. Many people are also buying into solar farms or purchasing solar panels for their homes. Anyone serviced by National Grid can have renewable energy through the utility’s GreenUp program.

Our delegation also learned about several innovative local renewable projects in our area. Pittsfield is one of three communities in western Massachusetts, for instance, that just won funding to study the creation of microgrids, which use renewable energy and battery storage and can provide protection during power outages. Also, Pittsfield recently worked with a developer to complete a new solar array on a former landfill. This system, which makes use of otherwise unusable land, is expected to generate 58 million kilowatt hours over 20 years. Other towns in our area are also investigating the use of their landfills for solar power.

The conference, attended by 50 or so planners and representatives of Berkshire towns, demonstrated that the pursuit of 100 percent renewable energy is gaining steam worldwide. Fifty-six cities and towns across the United States have committed to achieving 100 percent renewable energy; seven counties and the state of Hawaii have made the same commitment; and five cities are already entirely powered by renewables, according to the Sierra Club. Many are setting 2050 as the year for getting completely off fossil fuels, with interim targets at 2025 or 2030. The Sierra Club also reports on the campaign Mayors for 100% Clean Energy, listing the 190 mayors who have so far pledged to achieve a just transition to 100 percent renewable energy.

Hampshire College in Amherst is already powered entirely by renewable energy from on-campus solar panels. Boston University recently issued a Climate Action Plan that vows to realize all its electricity needs from renewable sources by the end of this year as part of its effort to reduce greenhouse gas emissions to net zero on BU campuses by 2040. Harvard University plans to be “fossil free” by 2050. More than 100 global corporations are also aiming for 100 percent renewable energy, according to Environment Massachusetts. These include Facebook, Google, Microsoft and several other Massachusetts-based companies

The effort to curb greenhouse gases is apparent at the state level as well. In 2008, the Massachusetts Legislature passed the Global Warming Solutions Act, aimed at cutting greenhouse gas emissions from each sector of our economy. It calls for reducing emissions 25 percent below a 1990 baseline emission level by 2020 and by at least 80 percent by 2050. Thanks in part to improvements in energy efficiency and increased use of renewable energies, declines are already underway.

For seven years in a row, Massachusetts has held the title of “most energy efficient state in the nation.” But that doesn’t mean we don’t emit a lot of greenhouse gases. A major source–about 40 percent–comes from the transportation sector. In January the governor’s Commission on the Future of Transportation in the Commonwealth was formed to consider the impacts on our transportation system resulting from what Gov. Charlie Baker calls “changes in technology, climate, demographics, and more.”

In the meantime, remember that vehicles are now the largest source of emissions in the state, surpassing power plants. Anything we can do to limit our car trips is helpful. Among other things, consider carpooling when you can. That’s how our delegation got to the renewable energy conference in Pittsfield: all five of us in just one car!