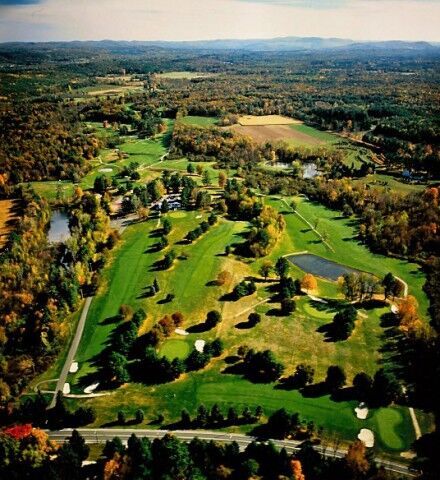 Great Barrington — A possible proposal to construct a 6-megawatt solar power installation on the grounds of the Egremont Country Club has encountered turbulence before even getting off the ground.

The ownership of the club, which includes general manager Frank Mazzarelli, has entered into an agreement with Cypress Creek Renewables, an integrated solar company that has several offices across the country.

If the site, which is dotted with wetlands, is deemed appropriate by town officials, portions of the 63-acre property could be turned into a power generation facility off Route 23 at the town line between Great Barrington and Egremont. In addition, a small portion at the southeastern extremity of the course lies within the town of Sheffield. But much of the property, as well as its entrance, lies in the town of Great Barrington.

The prospect of dozens of acres of solar panels visible from Route 23 has rankled the feathers of neighbors. Some of them attended a meeting Wednesday night of the Great Barrington Conservation Commission, which will be charged with enforcing the state Wetlands Protection Act.

See video below of the Great Barrington Conservation Commission meeting regarding a request for wetlands delineation from a company that wants to construct a solar array on the Egremont Country Club property:

Regulations on building anything on or near a wetland are numerous. For example, there is a 50-foot buffer zone on which virtually nothing can be built. And the town of Great Barrington’s zoning bylaws add another 50 feet to the buffer.

Naturally, any potential developer would want to know precisely where those wetlands are before embarking on a construction project. So Cypress hired GEI Consultants of Glastonbury, Connecticut, to walk the property in September in an attempt to delineate the boundaries of the wetlands.

Without such a map, Cypress could not move forward in the approvals process. GEI representative Kelsey Shields came to the commission with a map that isolated the wetlands on the property but was told that the commission would need to perform a site visit and hire a third party to conduct a delineation at the applicant’s expense.

“Because of the size of property and the amount of delineation, it’s really kind of out of our scope of expertise,” said commissioner Andrew Mankin.

There were many questions from the audience concerning the size of the project, its visual impact and how it would affect the community. But the commissioners emphasized that, at the moment, there is no proposal. And besides, their charge was a narrow one: to interpret and enforce the state Wetlands Protection Act. Further approvals would likely be the purview of the planning board.

Diane Sorrell, who lives on Route 23 on the Egremont side of the border, wanted to know if solar panels could be sited in a wetland. She told The Edge afterward that an expert on real estate told her her home would be worth far less bordering an industrial-scale solar array.

Tom McCarthy has, with his wife, Michelle, owned the Windflower Inn, a bed and breakfast directly across the street from the club, since 2016.

“I’ve been there two years,” McCarthy said. “I’ve sunk my life savings into my business and [this is] not what I want my guests to look at.”

“Let’s wait until we all have a plan, and then we will all be able to look at it and understand it,” said Jeffrey N. Cohen, who chairs the commission. “It is highly unlikely that solar panels will be approved in a wetland, or within the first 50 feet of buffer or another 50 feet beyond that.”

“This is step one of many, many steps,” added commissioner Kate Van Olst.

“They are only asking us to approve where the wetlands are located,” Mankin, a former chairman of the commission, said. “And I think the reason why they’re doing that is they are looking at different sites, probably, and, if this site looks like there’s not a lot of wetlands that are going to be in the way, then it might be good for them. That is conjecture on my part, but I have a feeling that is what they are doing.”

Shields explained that GEI had identified five wetland areas, generally along the northeastern and southern boundaries of the property. Those wetlands are primarily forested or emergent. Two perennial streams were also identified.

“They’re also highly disturbed, especially along the edges here, by historic development of the golf course,” she said, pointing to a map of the delineation.

GEI identified five water bodies along the property: an irrigation pond as well as three manmade ponds and Hubbard Brook, which runs generally along the northeastern border of the property. All of those water courses are located within the club’s property, Shields explained.

“We are asking the town of Great Barrington to verify these resource areas so that any future work can be planned outside of those areas,” Shields said.

Sorrell asked if the town of Egremont would have any standing in the process. Commissioner David C. Shanahan replied: “If the other two towns are involved, [Cypress] will need to get permits from three towns. I don’t see the likelihood of that, but I do know the Sheffield portion of it is going to have some water on it.”

The commission asked conservation agent Shep Evans to identify at least three prospective delineators and get an estimate for their services by the commission’s Wednesday, Dec. 19, meeting, or perhaps at its Wednesday, Jan. 23, 2019, meeting.

In an interview, Jeff McKay, Cypress’ director of public relations, said his company has the outline of a proposal but it’s in “the very early stages.” Cypress would like to use 32 acres of the property.

“It’s probably on the smaller scale of utility-grade projects,” McKay said. “But the numbers and details will not be finalized until the survey is completed and we have a site plan.”

McKay added that Cypress will hold additional community meetings and that, pending the necessary approvals, the goal is to start the build out some time in 2020.

“Our goal is to make win-win projects,” he said.

Mazzarelli told The Edge he has been trying to sell the club for years. Citing the confidential nature of the subject, he declined to discuss any agreement for the sale of the property he might have with Cypress or whether it was contingent on obtaining the necessary approvals.

Mazzarelli, who has been with the club for 30 years, said the front nine was built sometime in the 1930s and the back nine was constructed in 1962. He emphasized that the club, including the banquet facility and golf course, will remain open at least through the 2019 season. Indeed, the club is currently accepting season pass applications for next year.

When the property was on the market in 2013, it was listed with Lance Vermeulen Real Estate and the asking price was $2.5 million. Also on the property are a restaurant with banquet facilities that can accommodate up to 250 people, a fully stocked pro shop, a driving range, and maintenance and storage buildings.

In the 1980s, a large condominium project was proposed for the property but fell through because of public opposition. Five years ago, in an interview with this reporter, Vermeulen said development would have been easier in those days because wetland regulations were more lax.

The relative lack of interest in the property could be part of another trend. According to the National Golf Foundation, the sport has become less popular over the years. A high of 30.6 million golfers in the U.S in 2003 fell to 24.7 million by 2014.

The number of golfers between the ages of 18 and 34 has declined by 30 percent over the past 20 years. And golf memberships have dropped by a million since the 1990s. Fewer people play golf, according to the foundation’s 2012 study, and baby boomers don’t have the same time, money or interest in the game that their parents did.