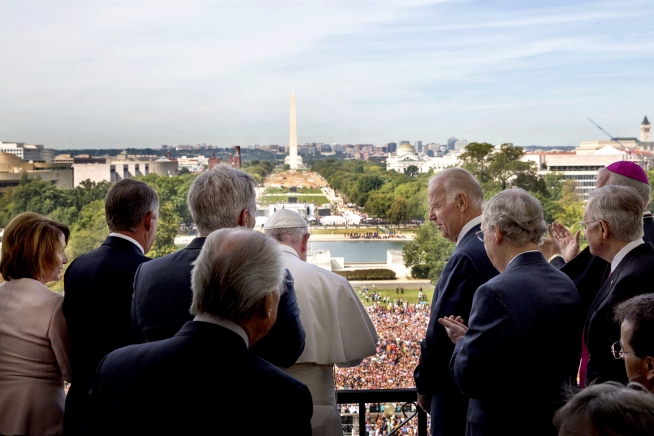 Pope Francis appearing before the crowd at the Washington Mall, surrounded by Congressional leaders, after his speech to Congress last week.

Last week the most powerful man on Earth stood up and publicly proclaimed that the success or failure of world economies depends on whether or not the human rights of women and girls are respected.

President Barack Obama, in a speech to world leaders gathered at the United Nations, insisted that “one of the best indicators of whether a country will succeed is how it treats its women.”

The newly established Sustainable Development Goals will only be achieved if women are allowed to fully participate in their societies, Obama said: “When women have an education, when women have a job, their children are more likely to get an education, their families are healthier and more prosperous. Their communities and countries do better, as well. So every nation — all of our nations — must invest in the education and health and skills of our women and girls.”

He drew applause from the gathering when he added that he has no “patience for the excuse of, well, we have our own ways of doing things. We understand that there is a long tradition in every society of discriminating against women,” Obama said. “But that’s not an excuse for not taking a new path in order to make sure that everyone in a society has opportunity.”

The “long tradition of discriminating against women” is no where more evident than in the Catholic Church, which has not only refused to allow women to take on leadership roles, but also has come down harshly on American nuns in recent years. Pope Francis deserves credit for having reached out to improve relations between the Vatican and the legions of Catholic nuns, but he still has far to go when it comes to fully recognizing the equality of women.

As one American nun put it in an open letter to the Pope, after an eloquent list of all the ways women are discriminated against in the world, “It is impossible, Holy Father, to be serious about doing anything for the poor and at the same time do little or nothing for women.”

In Philadelphia last weekend, Pope Francis did mention the importance of women, “saying it was time the church valued ‘the immense contribution’ of lay and religious women, and suggesting that the church could not afford to stay mired in old ways,” according to an article in The Guardian.

He went on to issue a clarion call for creative leadership, saying that reinvigorating people’s faith “will require creativity in adapting to changed situations, carrying forward the legacy of the past not primarily by maintaining our structures and institutions, which have served us well, but above all by being open to the possibilities which the spirit opens up to us.”

Pope Francis, like President Obama, has taken a strong leadership role on the pressing issue of climate change, which is rapidly coming to dwarf all other social problems. However, the Pope’s fine encyclical on environmental stewardship, Laudato Si, displays a major blind spot when it refuses to acknowledge the exponential growth of human populations as a huge contributor to global warming. 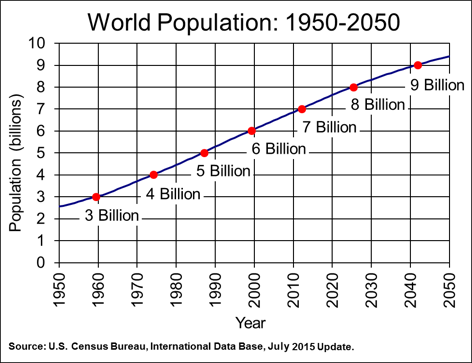 Let’s face it: fossil fuel emissions are just a symptom of the real problem of runaway human population growth. It may be possible for our planet to support the 9 billion human beings forecast by 2050, but only if we make major changes to our habits of consumption, and make every effort to limit our growth to sustainable levels.

I am pleased to see, even in the Catholic media, sober recognition that women need access to contraception in order to live up to the Pope’s call for environmental stewardship, as well as the U.S. President’s call for greater contribution to their national and local economies.

“For the sake of the earth and of the poor, it is time for the church to admit that the ban on artificial contraception is doing far more harm than good,” writes columnist Jamie Manson in the National Catholic Reporter. “Increasing access to family planning, education and contraceptives can happen relatively quickly and will have a high impact on those who suffer the worst deprivation in our world,” she continues, reminding the Pope of his own words: “Periods of deep crisis require bold decisions.”

How depressing it is to see so little evidence of bold thinking in our own U.S. Republican Party, which this week staged a kind of witch trial for Planned Parenthood President Cecile Richards, forcing her to defend the organization against trumped-up charges related to ever-controversial abortions.

According to Ms. Magazine, abortions account for only 3 percent of the reproductive health services provided by Planned Parenthood. The other 97 percent of its work is all about preventing unwanted pregnancies and providing life-saving health services for women and girls. Apparently, the Republicans representing Americans in Congress find this so frightening that they are willing to shut down the U.S. government—including the military, the IRS, the FBI, Social Security and all other essential offices—if they don’t get their way on defunding Planned Parenthood.

I find it frightening that our government could be held hostage to this radical political faction, the GOP, which seems to have more in common with conservative Islamic State demagogues than with ordinary Americans like you and me.

This was a week to hold the big picture in mind, as President Obama and Pope Francis did in their stirring speeches to the United Nations. When are we going to wake up as a world to the absolute necessity of heading off global warming by all means possible? That includes limiting population growth by providing women with contraception; which will also have the happy effect of giving more young women time and energy to focus on their educations and careers before they start their families.

It’s no surprise to find that the future of the human race rests on the strong shoulders of its womenfolk. If they are given a truly level playing field and freedom to control their own destinies, today’s women and girls will be the heroines who will bring the world safely into a saner, more sustainable era. Now that’s a mini-series I’d like to watch!