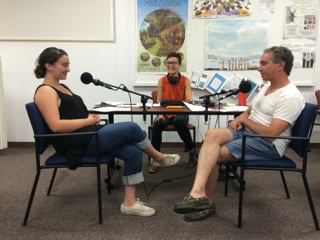 When I was in college, I was given the assignment of memorizing a passage from Shakespeare. A moody teenager, I loved the cathartic melancholy of the tragedies, and the passage I memorized, which I can still recite today, was this one from Macbeth:

Creeps in this petty pace from day to day,

To the last syllable of recorded time;

And all our yesterdays have lighted fools

The way to dusty death. Out, out, brief candle!

Life’s but a walking shadow, a poor player,

That struts and frets his hour upon the stage,

And then is heard no more. It is a tale

Told by an idiot, full of sound and fury,

I am happy to report that I no longer believe that bleak message, having dedicated a good portion of my personal and professional life to reading and writing memoir, and helping others to write the stories of their lives — stories that may be “full of sound and fury,” yes, but with great significance and lasting meaning.

My longstanding interest in memoir and oral history was reinforced by the enthusiasm with which Dave Isay, the founder of StoryCorps, was greeted last week when he came to Great Barrington to talk about its designation as “the first StoryCorps town in America.” Thanks to the vision of Mahaiwe Performing Arts Center Executive Director Beryl Jolly and Janet Elsbach of the Great Barrington Fairgrounds, Great Barrington finds itself at the epicenter of an exciting new StoryCorps initiative to create locally based archives of people’s life stories.

Lynnette Lucy Najimy, who helped coordinate the StoryCorps recording sessions, said that the organizers were surprised at the incredible range of ethnic diversity represented in the 54 recording sessions that took place. “There were Vietnamese business owners, Hispanic immigrants, generations of Italian families, African American community leaders, and global immigrants from all over, who consider this home,” she said.

Among the interviewees, some “came to share a particular point of view or a message that they want to spread in the world — for example, civil rights activists, holocaust survivors, drug addiction, farming, etc.  And some,” Najimy said, “just wanted to talk about what brought them to the Berkshires, or what keeps them here.”

“It was so amazingly tender and exciting,” said Suzi Banks Baum, one of the community facilitators of the interviews. “People came in ready to talk, even if they weren’t sure what to say.” Suzi described feeling “the dense beauty of sitting by as a quiet witness while these stories unfolded. Everyone I saw who recorded stories came out glowing. And many unexpected things arose in the tellings,” she said, as people relaxed and spoke from their hearts.

One man, Najimy said, signed up to talk about his military service, “but when the interview began, he decided to talk about his experience being transgender, a story that ended up being extraordinarily articulate and poignantly told.”

The Great Barrington StoryCorps project adds to the ever-growing StoryCorps archive of approximately 65,000 stories, told by 115,000 people. In his talk at the Mahaiwe last week, Dave Isay described this work as “collecting the wisdom of humanity.”

Now, thanks to Isay’s vision and the magic of technology, the archive has the potential to grow much larger. When Isay won the $1 million TED Prize this year, he used the funds to fulfill his dream of creating an open-access “app” so that anyone, anywhere in the world, could record an interview, adding to what is already the largest digital archive of human voices ever recorded.

So far, Isay said, 250,000 people have sent in their stories via the app. He did mention that his team has had to be vigilant about people who upload inappropriate stories — always a danger when you open the door to everyone without pre-screening or oversight. But most people, he said, are “using the app with fidelity.”

Isay shared with the audience at the Mahaiwe that this fall, StoryCorps will be inaugurating a new initiative: asking teachers to give their students the assignment of interviewing a grandparent over the Thanksgiving holiday. The flood of intergenerational interviews that result will surely be heartwarming and interesting. A long list of inspirational questions to jump-start the conversations is available on the StoryCorps website.

Asked how he chooses which interviews to air on NPR, Isay said that while “everyone’s life is a story, and every interview is an equally valuable, almost sacred record of people’s lives, we broadcast the stories that move us. The ones where there is a kind of poetry to them — they shake you on the shoulder and remind you of what’s important in life. They distill life in a way that jolts people — like an adrenaline shot to the heart.”

We humans are storytelling creatures — we have always loved and responded to stories, the more emotionally hard-hitting the better. Lynnette Najimy, who described herself as “over the moon” with delight in the StoryCorps process, believes that “the most meaningful education in our lives happens through storytelling.  When we hear someone’s story and we understand their experiences, we are less likely to judge, admonish and dismiss them,” she said. “We find commonality and compassion and it becomes easier to respect, support, and trust one another.”

Janet Elsbach, of the Great Barrington Fairgrounds, agrees. “The high points of the Fairgrounds project have been the places of human connection,” she said, remembering, how, at a Berkshire Festival of Women Writers event, she heard Lynnette tell her story, “weaving the place we are working to revive into her story of her father. Stories and connections are really what drive the work we are doing and give it meaning,” Elsbach said.

As Dave Isay put it at the end of his Mahaiwe talk, to hearty applause, “If we spent more time listening to each other, instead of screaming at each other, we’d be a much stronger, happier country.”

If the spirit moves you, download the new StoryCorp app, find a companion and start talking and listening to each other. To have your story included the Berkshires StoryCorps page, use the “Berkshires” as a keyword to identify your story, along with the name of the particular town where you live. Also, when titling your recording, use the phrase “In The Berkshires” as the opening, like so:  In the Berkshires: [Participant A] and [Participant B] discuss [X].

Who knows, you might even find your story being aired on NPR one of these days! But as Isay says, we record our stories not for fame and fortune, but to add to the collective, multi-faceted wisdom of humanity. Because contrary to what Shakespeare’s Macbeth thought, every person’s life is significant and meaningful, worth remembering and recording for posterity, “to the last syllable of recorded time.”