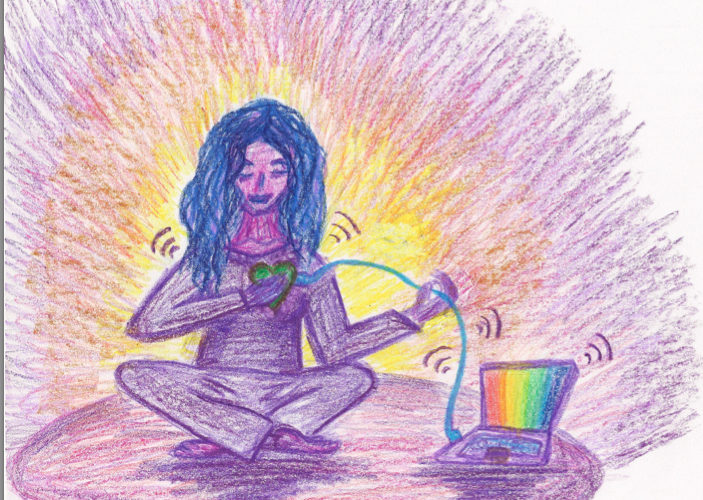 I told myself I was creating my online dating profile as a social experiment.

If I’m going to write about the hollow licentiousness characteristic of my generation’s dating behavior, I thought to myself, I ought to explore the matter from the inside out. Plus, I mused, as a feminist, it was my duty to witness firsthand the objectification, trivialization, aggressive solicitation, and other disturbing trends in the treatment of women on these sites.

Social commentators and anecdotal horror stories from my fellow college students told me the world of cyber-romance was home to the darker and dumber sides of humanity. I imagined millions of Yahoo trolls and YouTube commentators all congregating on one virtual platform to perform their digital mating dances.

It was time to conduct a thorough investigation. I figured I might as well start with the common denominator of the Internet courtship scene, the dating and social networking website OKCupid.com. Within minutes, I had a profile. Within seconds, my inbox filled with messages. And within a week, my smug intentions to conduct a social experiment were foiled. Magnificently.

Jeff and I “met” when an algorithm analyzed our profiles, compared them to one another’s, and determined we were 87 percent compatible. A cute boy’s face popped up on my screen, followed by a message. We messaged back and forth for a day or two before meeting at a local restaurant for Indian food.

My first OKCupid date! I thought, sitting in the taxi on my way to meet the boy. This is so exciting! – you know – for, um, research purposes!

I half expected to find a creeper in a trench coat. I half expected to get stood up. But what I found was, somehow, much more terrifying: a smiling college student, homework in tow, suddenly faced with the bizarre task of sharing a meal with a person he’d never met.

In that moment, I couldn’t deny that this Internet boy and I were no different. So he’s not a creeper, I thought. Damn it! I guess I have no excuse to bail. Two mango lassis, one large order of palak paneer, and several hours later, and any thoughts of “research” had been officially obliterated.

“How about tomorrow?” he asked, earnestly.

And so it went.

Now, four months in, I love waxing on about my boyfriend, Jeff, but I hate telling people we met online.

The stigma surrounding online dating is a powerful one. The mention of online dating often inspires people to use words like “desperate,” “sad” and “loser.” Until recently, I was of the firm opinion that the rise in online dating was evidence of the death of authenticity and humanity in our relationships.

That is, until I considered the following: meeting a person before meeting their friends, before knowing that person’s reputation within their community, before you have a history with, and stories about, that person, can allow for profound authenticity and honesty.

I hadn’t pined after this boy for years, or written him into love myths in my psyche. He wasn’t a character. He was just Jeff, sitting across the table from me, sipping slowly at a slushy drink, taking the heroic risk that is trying to connect. His courage moved me, giving me no choice but to match him in openness and sincerity.

It was hard, excruciating actually. My frequent flirtations with the role of social scientist had often left me free of the responsibility of exposing myself to others. I had forgotten what it felt like. And there, at 10 p.m., at India Pavilion in Porter Square, Massachusetts, the boy I met on the Internet led me to rediscover my humanity.

Grace Rossman is a senior at Bard College at Simon’s Rock. “Activated” by an activism class she took with Jennifer Browdy during the fall of 2013, Grace developed The Belly Monologues, a multimedia project focused on body image, relationships, identity, eating behavior, and the many intersections thereof. Following the example of audacious author-activists like Eve Ensler (of The Vagina Monologues fame), Grace hopes to spark conversation and shift paradigms by honestly and unabashedly acknowledging the world as it is. Currently working on a book of short essays and poetry entitled Insatiable, she is ready and eager to sink her teeth into a cornucopia of meaty subjects revolving around desire, consumption, and nourishment.