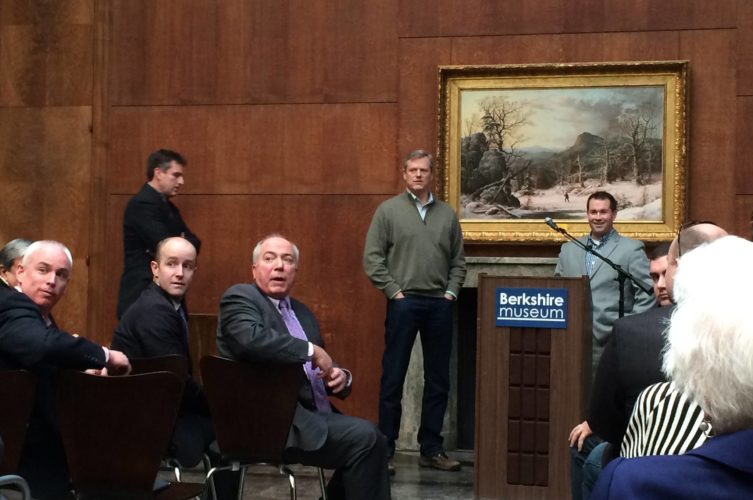 Last Saturday, I went up to the Berkshire Museum in Pittsfield to meet our new governor, Charlie Baker, with little in the way of foreknowledge or expectations. Out here in western Massachusetts, we didn’t hear much from either candidate during the 2014 election season; but I was hopeful that if more than half of the ballots cast in Massachusetts, a historically Blue state, went to Baker, he must have something good going for him.

First of all, bravo to Baker and Lt. Gov. Karyn Polito, for coming all the way out to Berkshire County on only their third day in office. Let’s hope this is a sign that they’ll be keeping western Massachusetts on their radar in the future.

“We may not have done well here on Election Day,” he said, “but we’re passed Election Day now — this is about governing, and that’s the way we’re thinking about it going forward,” he said to applause from the gathering of leaders in business, education, politics and cultural organizations.

I was pleased to hear him use the word “collaboration” repeatedly in his remarks. He also talked a lot about wanting to listen to local officials and communities about their perspectives and needs, rather than imposing top-down solutions that may not fit right.

He used the example of the founding of Mass MoCA, with which he was involved as the Secretary of Administration and Finance in the Weld administration; Mass MoCA was created in “a very collaborative spirit,” he said, with state and local officials working together to use the museum as a catalyst for revitalizing not only the arts but also commerce in northern Berkshire County.

His positive attitude was refreshing in a political scene that is so often full of doom and gloom. “There are a lot of great people in this state doing great things already,” he said. “We need to identify them, recognize what they’re doing right, and replicate it in other parts of the state.”

Having been conditioned by the rigid Red/Blue partisanship that has been strangling effective governance in the U.S. Congress since the election of President Obama in 2008, I am always wary that local Republicans may follow the lead of their federal colleagues in being unwilling to work across party lines.

So it was good to see Baker and Polito accompanied on their visit to Berkshire County by Jay Ash, the new Secretary of Housing and Economic Development, a Democrat who previously served as the city manager of Chelsea. Ash circulated among the crowd, creating a welcome impression of accessibility — and also a visible sign of the Baker-Polito administration’s bipartisanship.

Baker seemed genuinely interested in hearing questions from the audience. “My receiver works better than my transmitter,” he said, in a funny turn of metaphor. “I want to hear from you.”

The audience obliged by raising some of the key issues that concern us here in the Berkshires: support for tourism and small business; jobs and affordable housing, especially for young people; reasonably priced and sustainably produced energy.

Baker punted the question about tourism, recommending that local officials get into a dialogue with the Massachusetts Office on Travel and Tourism. But he dug deeper into the question about providing more opportunities for young people in the Commonwealth, highlighting innovation centers, small business accelerators, affordable housing and support for young urban professionals who want to start their own businesses as important strategies for encouraging young people to stay in Massachusetts. He also voiced his support for small businesses, saying that he wants to work through policy to “remove barriers to growth” such as the high cost of health care and energy in the state.

He didn’t say any more about health care, but his campaign website follows the Republican Party line of attacking the Affordable Care Act, even while acknowledging that it is based on the model developed right here in Massachusetts under Republican Governor Mitt Romney. Baker comes to the Governor’s office from a 10-year stint as CEO of Harvard Pilgrim Health Care, so he obviously knows a lot about this issue. Let’s hope he can fulfill his campaign pledge to “work with key stakeholders in the health care community to develop policies that meet the needs and improve the care of the residents in the commonwealth” — without sabotaging the federal initiatives supporting access to health care for all Americans.

I have to say that my heart sank when I heard Baker begin his reply to the question by saying that he believes “pipeline capacity needs to be expanded to bring natural gas from Pennsylvania into our state.” Natural gas pipelines are a touchy issue here in Berkshire County, where so much of our economic viability rests on our natural beauty; and I am not in favor of fracking in any community, given the enormous risks to health and environment.

But I was somewhat relieved when the governor added that he’s “mostly talking about expanding existing pipelines, replacing 3” pipe with 4” pipe,” rather than creating ugly and dangerous new pipelines across our beautiful Berkshire hills. And he did say that he supports “a robust renewable energy program,” an approach elaborated on his campaign website.

Although no one raised a question having to do specifically with women’s issues, it was good to see the new lieutenant governor in action. A business executive in her own right, Karyn Polito seems like a vigorous, forthright woman, and I am pleased to learn that she has been a champion for women in science in Massachusetts for many years.

All in all, I am cautiously hopeful that Baker and Polito will be effective leaders for our state. If they don’t hold the trouncing we gave them at the polls against us, we shouldn’t hold their party affiliation against them, either. Let’s start out by giving Governor Baker the collaboration and dialogue he’s asking for, and see if we can help all boats rise in Berkshire County, as in the rest of the state.