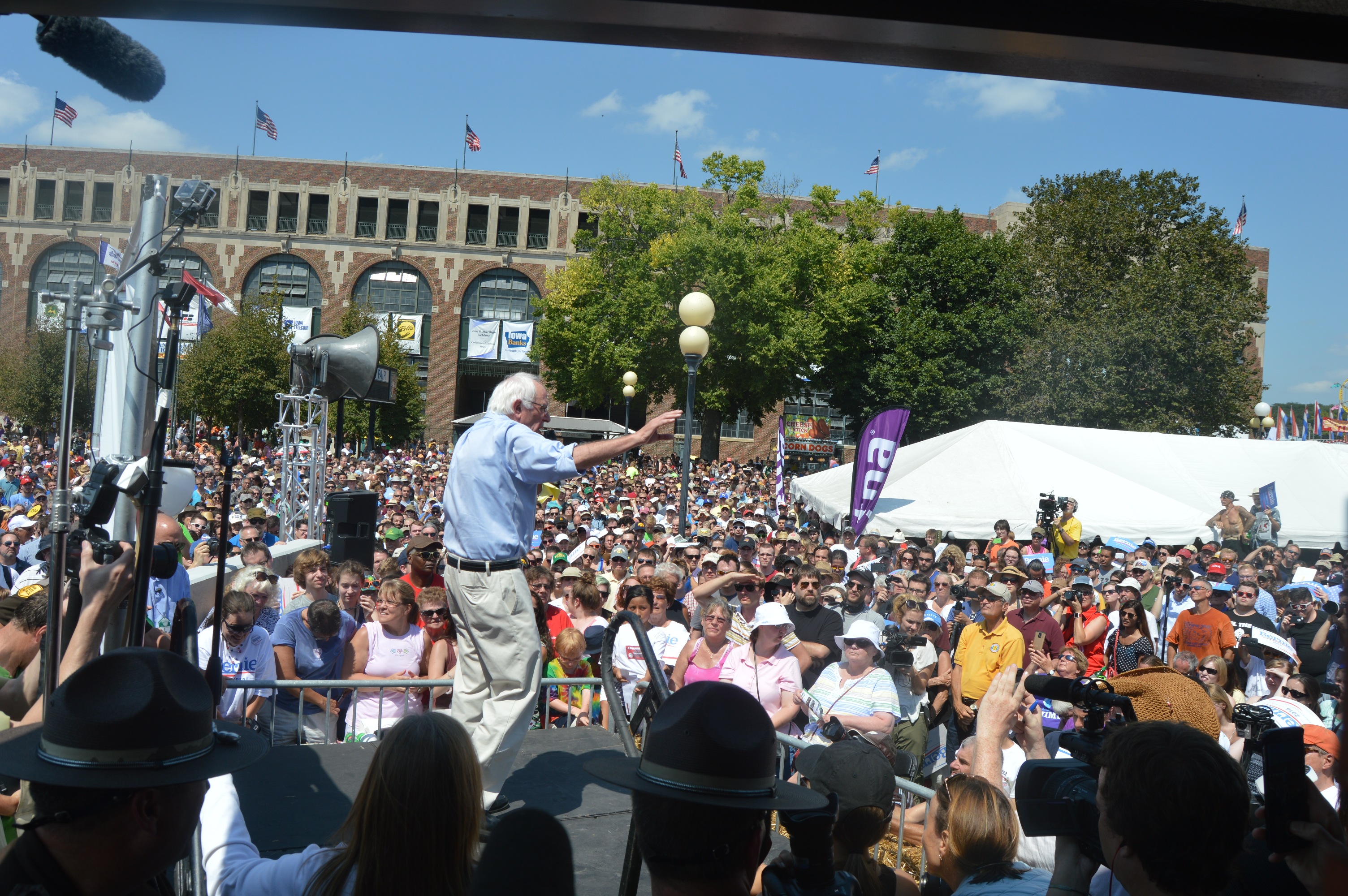 The Democratic primary election may still be six months away, but if you’re a Democrat, it’s time to start paying attention to how the field is shaping up. To my mind, it’s looking like a contest between Hillary Clinton and Bernie Sanders, though if Joe Biden were to decide to run, it would shake things up by providing a safer candidate: white, male, grandfatherly, moderate.

I’ll share my take on the other front-runner, Hillary Clinton, another day. Lately, I’ve been watching the campaign of Bernie Sanders, U.S. Senator from Vermont, with increasing interest. A front-page article in last week’s New York Times, blatantly dissing Bernie while paying lip service to being “objective,” demonstrates how difficult it can be for dissenting candidates to get their messages out to the public.

As a professor of media studies, I train students to analyze the news through close reading. Let me give you a little taste of how I’d read this purported “news story” with my class:

From the very headline, we have to wonder why the editors chose to place the word “Revolution” in scare quotes. Is Bernie Sanders proposing a real revolution, or just a ‘revolution’?

Far down in the article, after a series of comments on Sanders’ “relative obscurity” as a politician, his “sweepingly macro, if not entirely Marxist critique of America” and his “grumpy demeanor,” we get to the heart of the Sanders campaign: the platform that is drawing him such large crowds as he speaks at rallies and events across the country.

The reporter, Jason Horowitz, tells us that Sanders “would invest in enormous infrastructure projects that he said would create more than 10 million jobs. He would expand, not shrink, Social Security, and move the United States to a single payer health care system. Legislation that he intends to propose or already has would automatically register anyone older than 18 to vote, kick private corporations out of the prison business, make public college tuition free, guarantee sick and paid family leave and a ‘couple of weeks paid vacation’ to workers. He would break up the banks that are too big to fail, keep us out of any more wars and pay for much of his spending program with a tax on Wall Street trading.”

That all sounds pretty good to me, and Bernie is obviously hitting a sweet spot with many Democrats as he makes his way along the campaign trail. However, The New York Times makes sure to squelch this vision with an immediate follow-up: “The critique that none of these proposals is remotely plausible given the political realities in Washington.”

The article ends on a flat note with a quote from a Sanders friend, “Richard Sugarman, a University of Vermont professor of Jewish philosophy and self-described ‘biblical socialist,’ ” talking about whether or not Bernie was eating pork on the campaign trail. The relevance of this is nil, other than as an excuse for the reporter to remind readers that Bernie Sanders is not only a revolutionary Marxist with socialist friends, but also a Jew who doesn’t eat pork.

I suppose Sanders should feel flattered that he at least merits a New York Times reporter in his retinue, and a front-page story in the newspaper — unlike longtime Green Party presidential candidate Jill Stein, who is almost never given any mainstream news coverage, and is routinely barred from participating in the nationally televised presidential debates.

As someone who agrees with the party platforms of both Sanders and Stein, it’s frustrating for me that the media coverage of them is so hostile, and that everyone seems to assume that it’s impossible for them to win against the Republicans in the national elections.

There are a lot of walls tumbling down these days. Who’s to say that the “revolution” Sanders is talking about couldn’t come to pass?

It’s true that the ruling class has been tightening its grip on political power through district gerrymandering, voter suppression, media control and the right to unlimited political spending. It’s true that the electorate has often been apathetic, distracted and fickle.

But when people get angry enough at injustice and find a charismatic leader to unite them and channel their ire productively, even the most iron-fisted regimes crumble — we’ve seen that repeatedly in history, including in our own American Revolution.

Bernie Sanders may be an unlikely hero, but he’s got the guts to be out there speaking truth to power in ways that no one else in the Democratic Party seems willing to do. As someone who shares his vision of a kinder, fairer America, I’m grateful to Bernie for giving it his all, and I’m nowhere near counting him out as “unelectable.” He just may be right: the time for a new American Revolution is at hand.