Great Barrington — On Monday morning (October 23) scores of activists turned out to kick off a “week of resistance” to the Connecticut Expansion Pipeline in the Otis State Forest in Sandisfield.

In solidarity with Divest the Globe, indigenous Water Protectors and Sugar Shack Alliance activists and others conducted a resistance week in advance of the flow of fracked gas through the pipeline, which energy giant Kinder Morgan began on Nov. 1.

The groups hosted what they call a “divestment action” at the Great Barrington TD Bank branch on Main Street. Although TD didn’t fund this particular pipeline in Sandisfield, the bank has poured billions of dollars into Kinder Morgan and other fossil fuel extraction projects in the U.S. and Canada.

Demonstrators started the protest at the Southern Berkshire District Court, where dozens of them had previously appeared before Judge Paul Vrabel to face charges of trespassing and other minor charges stemming for their actions in Sandisfield.

Then, toting a pup tent and carrying signs urging a boycott and divestment, they camped out in front of TD Bank on Main Street. Other signs mentioned Article 97 of the Massachusetts Constitution, which protesters say should have protected the Otis State Forest from Kinder Morgan’s actions.

The Sugar Shack Alliance and Water Protectors from around the country have been demonstrating at the Sandisfield site since construction started in the state forest in April of this year. Over 70 arrests have taken place since that time. 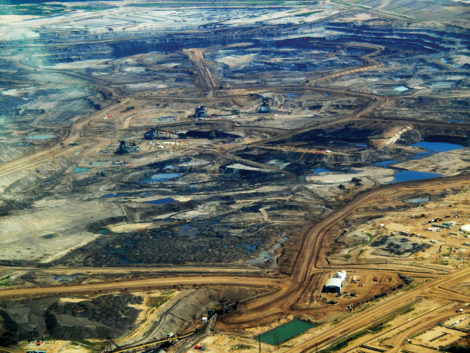 A tar sands extraction complex in Alberta, Canada, where TD Bank has invested. Pipelines to American Midwest, Mackenzie Valley, and through the Great Bear Rainforest will bring new threats to these regions while the pipelines fuel new markets and ensure the proposed five-fold expansion of the Tar Sands.

Meanwhile, Kinder Morgan Corporation is expected to soon begin construction of the Trans Mountain Pipeline, which will carry tar sands oil from Canada to terminals for export and profit. The project has encountered strong resistance from indigenous groups who object to its construction on or near their lands.

Sugar Shack says the Divest the Globe campaign calls for individuals and institutions to divest from banks that finance this project and others. The activists have targeted TD Bank (formerly Toronto Dominion Bank) since they claim it’s the top funder of the Trans Mountain Pipeline.

“The continued construction of fossil fuel infrastructure is killing our planet and her people. It is our civic duty to do all that we possibly can to stop this construction, which is unnecessary given known and present options for renewable energy,” said Priscilla Lynch, a member of the Sugar Shack Alliance. “It is the financial greed of fossil fuel corporations like Kinder Morgan, which is driving these dangerous and life killing pipelines. Divesting from banks supporting this greed is one tool for affecting change and saving our planet.”

The call for divestment states that, as consumers and customers of all sizes, “we demand TD Bank stop using our money to fund tar sands pipelines that our communities and planet cannot afford. We call on our neighbors, elected officials, and pension managers to close all accounts with TD Bank unless they immediately stop financing tar sands pipelines.”

In response to the protests at TD Bank in Great Barrington and in Northampton, Matthew J. Doherty, Assistant VP, Corporate Communications Manager at TD Bank, sent the following rejoinder, expressing the bank’s position on investments in energy projects:

“We at TD welcome diverse perspectives on this important topic and respect the right of people to express their views in peaceful protest. TD is committed to facilitating the transition to a low-carbon economy over the next 30 to 40 years by investing in sustainable businesses and technologies, supporting carbon-neutral operations, and partnering with environmental nonprofits to create green urban spaces across the communities we serve. That said, we recognize that conventional energy remains a vital component of the local economies we serve and is necessary to meet our country’s energy demands. As a result, any support of conventional energy projects must meet our stringent environmental and social responsibility standards, while we continue to actively support the low-carbon economy of tomorrow.”

In addition, TD Bank officials have confirmed that it “is not engaged specifically in the Connecticut Expansion Project as an investor or advisor.”