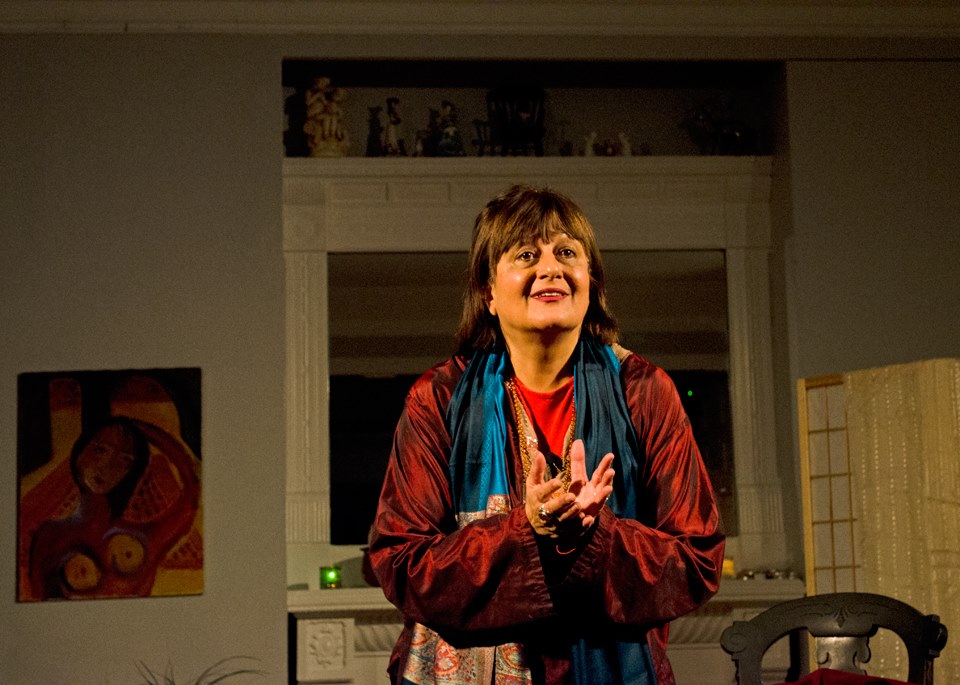 I awoke on the morning of January 1, 2013 — New Year’s Day — with what one might consider an unusual question. “What can I do to terrify myself this year?”

Within an hour of posing that question to myself, the phone rang.  A friend was inviting me to offer an evening talk on my work with women artisans around the world at a performing arts center nearby. I am used to giving these talks, the topic is familiar and comfortable. But what I said to my friend that morning took us both by surprise. “No. No more talks. No more speeches. I want to do a one-woman show. It will be called “The Heroine’s Journey: Tales of Love, Despair, Faith and Forgiveness.” 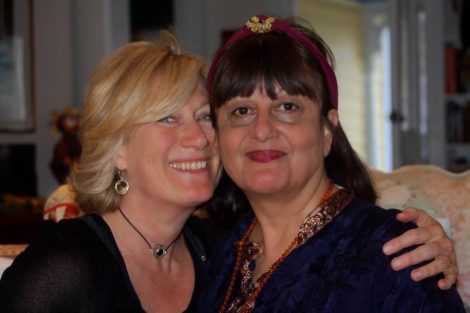 Jayne Atkinson, left, directs Amber Chand in her one-woman show at the Unicorn Theatre on June 13.

“Oh my goodness!” she exclaimed. “I had no idea you wanted to do a one woman show, Amber!”

Could it have been a “divine download?” Could it have been that the forces of my life — my destiny — were converging upon me in this strange and unexpected way? I don’t know. But I can tell that you once I put the phone down and agreed to perform my as-yet unwritten one-woman show later that summer, I danced around my living room like a little girl, deliciously happy!

In retrospect, I have to wonder whether I was being overly bold to do something I had never done before. Was I crazy risking such personal exposure in front of an audience? What if I froze on stage? What if the audience hated it? What if I really had nothing to say?

These were the clamoring voices of fear. I paid no attention, for I felt the urgency of the Call. I knew I could not walk away. Khalil Gibran refers to callings as “life’s longing for itself” and even as I felt terrified by the unfolding journey, I also felt completely, madly, alive.

As I worked on writing and rehearsing my show, whenever I became fearful of the audience’s reaction, I would freeze. I had to learn to relax, to reframe the process so it would free me from this the imprisonment of performance anxiety. In sharing my story, I sought to be seen, not merely looked at. To be witnessed, not judged.

I was ready to share my story with the world, with all its tender vulnerability, courage and authenticity. Not to read it at a podium or mount it as just another evening’s entertainment, but to offer it as something deeper, more primal: a bridge to the human heart. Through my story, I would tap into all our stories, into the collective human pulse of love, despair, faith and forgiveness.

Each of our stories has its own unique dramatic nuances. Mine, a riveting, evocative story, would transport my audience into an eclectic world of Indian arranged marriages, British boarding schools, tyrannical African dictators, encounters with Indian holy men and Rwandan genocide survivors.

As I began to perform the show in front of audiences, and to feel how my story resonated on a deep level with theirs, I realized that my show is not performance so much as sacred theatre: an offering made by one woman on the journey of her life. I invite my audiences to engage rather than distance; to open their hearts as I have opened mine to them.

In “The Heroine’s Journey” the collective human story reverberates through the voice of one storyteller, who seeks, by sharing her own experience of “love, despair, faith and forgiveness,” to ignite the sparks of soul in each of us.

Searching for the Moon: A Heroine’s Journey, Tales of Love, Despair, Faith and Forgiveness, written and performed by Amber Chand and directed by Jayne Atkinson, will be performed at the Unicorn Theatre in Stockbridge, Saturday, June 13 at 7 pm. Tickets , $25. Call: 413-997-4444.

Amber Chand’s mission to inspire, support and encourage others to live from a place of enlivened authenticity has led her to her work as a performer, author, visionary life/business coach, and global entrepreneur. Through her signature coaching program, “The Hero/Heroine’s Journey: Creating Your Brave, New Story,” she works with individuals who are going through a time of deep transition. Through her Global Journeys initiative, she offers a guided journey for women to the foothills of the Himalayas and India. Amber’s work has been recognized in a variety of media including Marie Claire, Kosmos, Oprah and Inc. Magazine. She lives in Great Barrington. www.amberchand.com