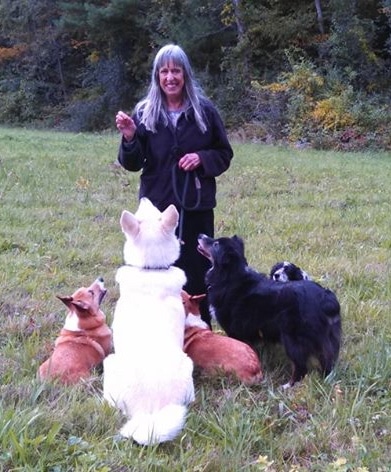 It was in the nipping and blighting of a winter’s night, two months after you’d moved into your new house, your children in their beds, the dogs and cats nestled, sprawled wherever they pleased, a sweet lowing of cows in the back fields, pigs rooting, barn cats caterwauling, the soft rumbling of a distant train, you had lain awake, waiting for the dreaded sounds you’d come to imagine you could hear: moaning, plaintive whimpering, laments resounding in the purged, bare air. A man half a mile away, down by the river, kept his dog (you learned her name was Dolly) tied to a doghouse down in a marsh. You walked past her every morning, your dogs joyously bounding ahead, Dolly appearing happy, wagging her plummy (half collie, half shepherd) tail, but a deep longing in her radiant eyes told you otherwise.

You knew her owner was a nice man by the way he had welcomed you to the neighborhood, unlike the woman on the corner lot who said, “Beware of that one, young and divorced. She spells nothing but trouble.” You could not remember how her words got back to you, but you had laughed back then when you took nothing personally and your mother often called you a naïve, gullible fool.

That night, knowing this nice man simply didn’t know who dogs were, you decided to do something for Dolly and so, in your nakedness, you pulled on boots, drew on an overcoat with a hood and crept from the house under a luminous sky, the moon hanging like an open-mouthed wail guiding you up the dirt road, across a bridge and down an embankment, through the sucking swamp up to the doghouse, Dolly’s eyes glowing with unassailable goodness. You untied her, she gave you a delicate lick on the mouth, a tender kiss, and together you went back to your house. She slept on the floor next to your bed. The other dogs didn’t mind, remembering they were once in varying degrees of dire straights, and in the morning you found three cats curled up against her.

And, so it went, night after night, you breaking her free, her owner somehow knowing to come looking for her at your house.

“How the hell does she get loose? I’m sorry she’s bothering you.”

“Oh, no bother, our pleasure.”

“It’s a damned mystery,” he’d exclaim, and you began to wonder if he was teasing you, if he’d been watching you from inside his house, if he noticed that the mats had been cut from Dolly’s hindquarters.

Finally, one cold, bright morning, he said, “Christ Almighty, you might as well keep her. She obviously wants to live with you.”

“Okay,” you said casually, as if your heart wasn’t bursting with affection for this man kind enough to let you steal his dog — unlike your mother, forgiving your craziness.

You and Dolly danced together every night after supper. Her favorite dance song was Gonna Make You Swat, better known as Everybody Dance Now. She was a treasure and lived to be twenty-three (she probably could have been in Ripley’s Believe it or Not for being the world’s oldest dog). No words can say how much you miss her.

There are times you imagine Death’s breath on the back of your neck. Aware your days are numbered, you hold an unsullied, childish notion that your soul, once breaking free of mortal restraint, will move on the wings of wind in the company of Dolly and other beloved creatures who have left the Earth, all of you having found one another in the Indian Summer of eternity, all gold by day and silver by night, that enchanted place where only love and justice exist.

Joan Embree is a mother and grandmother living in the Berkshires with three dogs and one cat. She works as a caterer, private cook and yoga teacher. Formerly the owner of Embree’s Restaurant, she worked with the gifted poets, Michael and Peter Gizzi, who encouraged her to write. She recently completed her first novel, Summer of the Stolen Dog.