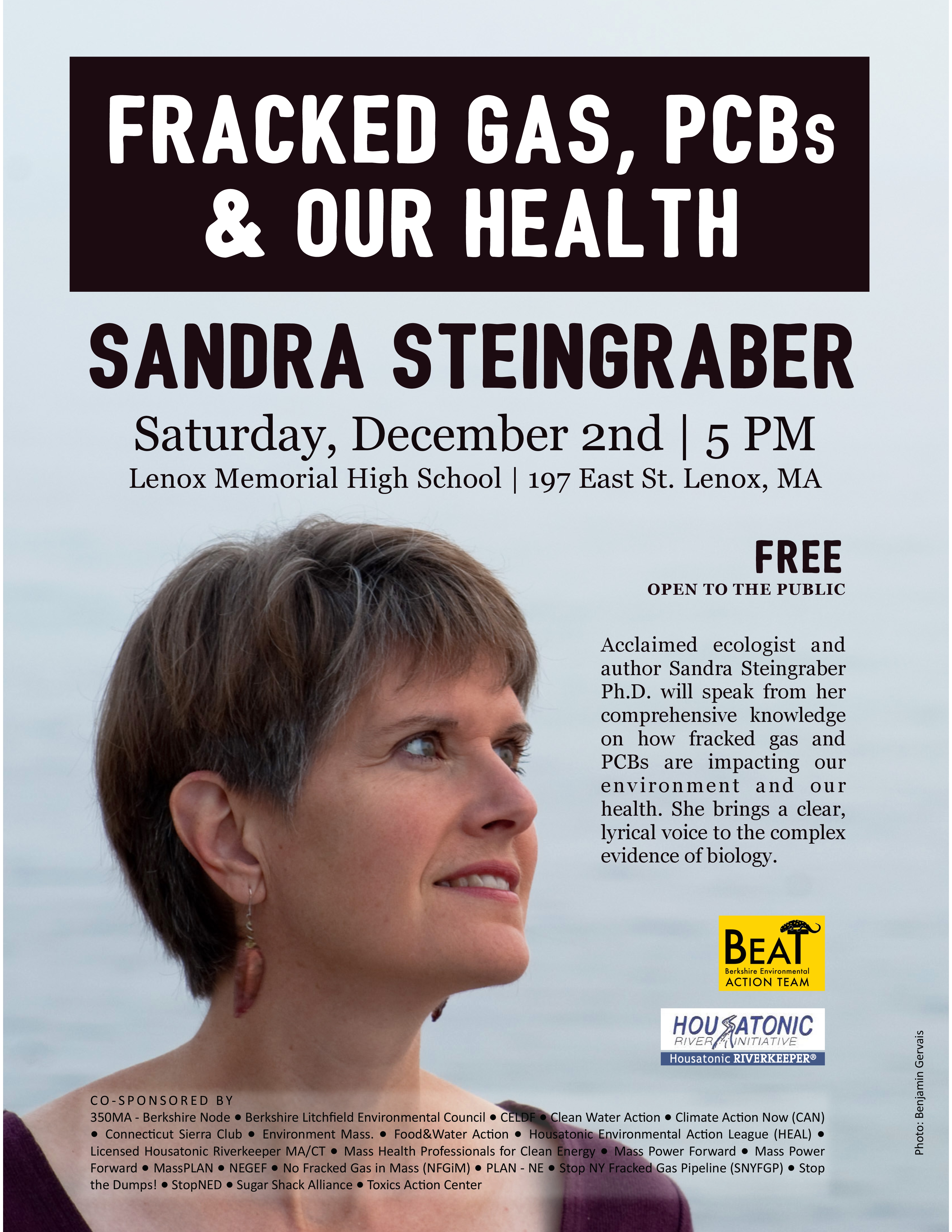 PCBs (polychlorinated biphenyls) are the toxic organic compound, once used as an insulating fluid in electric transformers, that now pollutes the Housatonic River after millions of pounds were dumped into the river from the General Electric manufacturing complex upstream in Pittsfield. Fracked gas and the pipelines carrying that gas have been on the frontline of environmental debates as severe dangers to the environment. Controversy has swirled around the now-completed Connecticut Expansion pipeline – part of which runs through Otis State Forest – with state police making nearly 100 arrests of local activists and water protectors who protested the project as unnecessary and toxic infrastructure.

Steingraber herself has been arrested for blockading and protesting planned fracked gas storage projects near Seneca Lake in upstate New York. She helped spearhead the resistance to gas infrastructure expansion in the Finger Lakes area and is co-founder of the advocacy group New Yorkers Against Fracking.

The Ithaca College scholar-in-residence and mother of two is a leading voice in the anti-fracking movement and in the environmental health field. She co-founded Concerned Health Professionals of New York and is Science Advisor to Americans Against Fracking. Her 1997 book Living Downstream: An Ecologist’s Personal Investigation of Cancer and the Environment earned widespread acclaim and inspired a film version released in 2010. Living Downstream was based on by Steingraber’s personal journey as a cancer survivor and her career as a scientist.

Steingraber’s other works include Raising Elijah: Protecting Children in an Age of Environmental Crisis, Having Faith: An Ecologist’s Journey to Motherhood, and Post Diagnosis. She also is featured in the recent documentary “Unfractured” as an activist speaking out about the environmental risks of fracking. Steingraber is a contributing essayist and editor at Orion magazine.

Saturday’s event is free and open to the public. The presentation will be followed by a Q&A session and a book signing. Berkshire Environmental Action Team and the Housatonic River Initiative are lead sponsors, and numerous other groups are co-sponsoring.