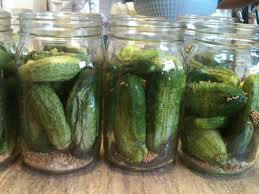 One day a couple of summers ago, my husband came into the kitchen to find me boiling a large rock on the stove. Stone soup? he asked. No. And I went on to tell the tale of making my first batch of pickles from the abundance of cucumbers we had grown in the garden. Simply, I had needed a weight to put on top of a plate on top of my cucumbers so they would not float above the brine they were pickling in and I was loathe to place a rock that was not sterile on top of that plate. I can report that the rock did its job and the pickles were delicious. I wish I could add that this started my annual pickling of garden produce and anything else that is picklable, but alas, life has gotten in the way and I only buy what I can at the store most of the time. I will say that I have grown enamored of naturally fermented pickles and other vegetables, both for their great flavor and for their incredible health benefits.

When you think about it, it is amazing what people did with food before anyone understood the science behind it. And it is equally amazing how quickly we discarded these ancient traditions in favor of the science that allowed us to make things fast and in quantity. The good news is, science is falling squarely in favor of many of the techniques used by our ancient ancestors, in many parts of the world, when it comes to the role of food in supporting good health. In this article I’ll talk about fermentation in vegetables and fruits, leaving meats, milk and breads for another time.

As far as we know, fermentation dates back to approximately 6000 B.C. in the Fertile Crescent — and nearly every civilization since has at least one fermented food in its repertoire; many of those traditional foods appear in a different guise today, though some, like kimchi, cannot be reproduced without the traditional recipes. Fermentation has been used with vegetables, fruits, grains, beans, meats and dairy products. While we do not know how these cultures determined that fermentation could protect them from foodborne illnesses or destroy toxins in food, modern science has determined that it can and often does.

Let’s start with what we mean by fermentation. According to Wikipedia, “Fermentation is a metabolic process that converts sugar to acids, gases and/or alcohol. Fermentation in food processing is the conversion of carbohydrates to alcohols and carbon dioxide or organic acids using yeasts, bacteria, or a combination thereof, under anaerobic conditions.

Lacto-fermentation is the process that refers to the lactic acid formed when the starches and sugars in foods are converted to lactic acid by specific bacteria. By placing these foods in salt (sauerkraut) or a saltwater brine (sometimes with the addition of whey), the beneficial bacteria are encouraged and begin the fermentation process. Pickles are the most familiar fermented food in this country, but most of the pickles we eat are not lactofermented cucumbers: they are simply cucumbers soaked in vinegar, or for really quick pickles, doused with hot vinegar which is absorbed into the cucumber more quickly. These are often made with a variety of pickling spices and are tasty, but they do lack the health benefits associated with lactofermentation. Pickled beets and sauerkraut are probably the next most popular. Sauerkraut, even the canned commercial sauerkraut, is generally lactofermented, because it is so simple to do. The problem with the canned and shelf stable sauerkrauts is that they have been treated to high heat to make them shelf stable, losing some of the healing value of the food. Beets, on the other hand, are again usually soaked in vinegar, and often with added sugar to compensate for the bite from the vinegar. These can also be easily lactofermented, assuring that they are a good source of the lactic acid and lactic acid bacteria so they are able to bring more therapeutic value to the food.

And you probably did not know that ketchup, marmalade and relishes also used to be lactofermented. Ketchup, originally known as ke-tsiap, was a spicy, pickled fish sauce made of anchovies, walnuts, mushrooms and kidney beans from Indonesia; it became a tomato-based food in the 1700s in New England and eventually, as the other fermented foods, became a vinegar-based condiment. Marmalade is another traditionally fermented foods, taking on long ship voyages to prevent scurvy.

The first benefit we see with fermented foods is that of food safety. This starts with simply the preservation of food; simply put, lactic acid is a preservative that prevents the breakdown of food by pathogenic bacteria. We also know that in some West African countries, cassava root is fermented to break down its natural cyanides which can otherwise be toxic. In addition, L. plantarum, which is one of the healthful bacteria formed in fermentation, boosts the immune system by increasing antibodies that inhibit pathogenic organisms including E.coli and salmonella and actually destroy others; this is how it helps to prevent food-borne illness. 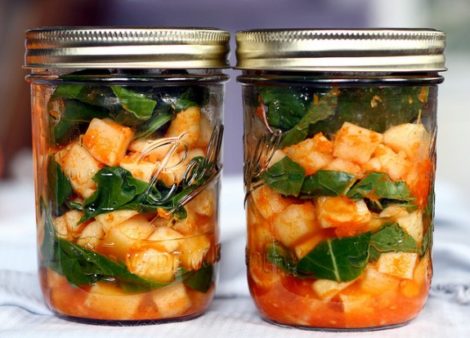 Beyond food safety, recent research has identified other health supporting activities of these foods. Their immune system-boosting qualities help to limit yeast overgrowth, increase the digestibility of foods and increase nutrient value. Many fruits and vegetables contain antinutrients, such as oxalate (associated with kidney stones), protease, and α-amylase inhibitors (interfering with digestion), lectins (irritants), and phytic acid. These may be detoxified by the action of microorganisms during fermentation process. Nutrients that may become more available with lactic acid fermentation include calcium, phosphorous, and iron.

Our most recent research is finding even more significant positive impacts from these foods. Sauerkraut, it appears, can play a role in the prevention of breast cancer, as well as cancer of the colon, lungs, prostate and liver. This is based on research on the production of specific food chemicals in the fermented cabbage as well as an epidemiological study comparing Polish women eating a tradition diet versus an American diet devoid of sauerkraut. In South Korea, a researcher is having positive results with curing avian flu in birds with kimchi. There is some evidence that the addition of the lactic acid bacteria created through lactic acid fermentation may help to break down uric acid and thereby decrease the chances of developing one kind of kidney stones or gout; gherkins, which were traditionally lacto-fermented, were a standard accompaniment to meats which promote the body’s production of uric acid. Probiotic foods have the capacity to assimilate cholesterol, reducing cardiovascular disease risk and some of the lactic acid bacteria appear to foster healthy bacteria in the mouth, helping to reduce the incidence of decay as well as promote oral health.

Since all of this data points to the fact that we should all be eating lacto-fermented foods, let’s talk about how to do this. If you are going to buy them, there are three rules:

They can be made with many vegetables, and add zing to your meals while promoting health. You can also just drink juice fermented from vegetables and fruits and many of these are available in the marketplace also, most commonly cabbage juice and beet kvass.

The most common meals are sausage with sauerkraut or pickles, or any sandwich with pickles. Pickled beets are a great accompaniment to deviled eggs and cheese and can also be used in salads. Kimchi, a spicy South Korean fermented cabbage product, is more recently popular and is used in fried rice, stews and egg dishes, as well as in the ways we already use sauerkraut. More recently, people are fermenting fruits and using them as compotes and relishes to add a sweeter bite to meals.

There is also a great resurgence in making your own fermented foods that I have only dabbled in. The process is simple and there are many websites and books with instructions. You can use anything from an old crock to a new-fangled machine that controls the amount of oxygen the food is exposed to. And you can use a wide variety of vegetables and fruits. Here are some of the websites I have found helpful:

And these two are new to me and have recipes for making lactofermented fruit sodas which I just might have to try.