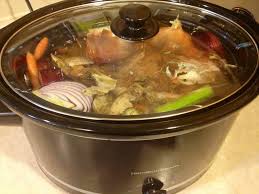 As the weather gets cooler, we look for warmth from our foods. We also look to foods that are going to help protect us from winter ills.

The food that fits the bill for that is soup; not just any old soup, but soups made from good old-fashioned bone broth. While the advent of monosodium glutamate in the early 1900s made it possible to create “tasty” broths and soups with minimal input from meat or bones, these tasty liquids do not have any of the vital healing substances that are acquired from the slow cooking of bones.

They do not provide the medicinal attributes that Maimonides (physician to the Egyptian royal family, 1100s) attributed to “Jewish penicillin” (chicken soup), or the preventative and curative properties of Asian elixirs, which were made from the parts of the animal that we don’t otherwise eat, and cooked over low heat for many hours.

Due to the fact that it is hard to fund scientific research that will not net many dollars for the sponsors, no one is testing bone broths to determine if they have the properties attributed to them since the discovery of fire allowed us to make them. There is research available on some of the components of bone broths and their benefits for humans.

You can make bone broth from any animal bones from fish to poultry to meats.

It is best to make it from bones of grass fed animals because they have the fewest contaminants. Bones from different animals (and different bones from the same animal) have varying concentrations of the above components and others and therefore should be cooked for different amounts of time and probably have varying impacts. As with all the food we eat, the best way to assure we are getting the wide range of nutrients our bodies need is to go for variety.

It is also important to remember that the individual nutrients found in most foods act synergistically with the other nutrients as well as with other structural and functional components to stimulate our bodies in ways that we do not begin to know how to measure. Plain bone broth is a nice afternoon beverage or a good way to start a meal. If you want to make a meal of it, it is best to add some animal protein to complete the amino acid balance. A variety of vegetables will round out the nutrient value as well as the taste and texture.

To make a basic stock:

You can add onions, celery, garlic, mushrooms for flavor and extra nutrients

Cover by an inch or 2 with cold water — approximately 4-5 quarts.

Simmer 12 to 24 hours (the longer it is cooked more amino acids and minerals there will be in the soup), skim scum from the top periodically.

Removing marrow bones early will limit the amount of marrow in the soup – the marrow can be difficult to digest in the beginning; you can also simmer to full strength and dilute for use

When done cooking, strain, chill, skim fat from the top to use for other cooking

Store up to 5 days in the refrigerator, or freeze

Substitute 3 to 4 raw chicken carcasses and leftover bones from roasted chicken as well as chicken feet for extra gelatin (you can do this with duck, pheasant, turkey also – the bigger the poultry, the smaller the number of carcasses needed)

Follow other directions and simmer for approximately 6 to 10 hours

Add other ingredients as above

Cover with approximately 3 qts cold water (cover by an inch or 2) and simmer for about 1 hour, skimming scum from the top as needed.

Any of these can be made in a crockpot and generally require less skimming.

These broths can be used as a base for soup or to cook grains and other foods; the goodness will be absorbed into the food.

Enjoy and be well!