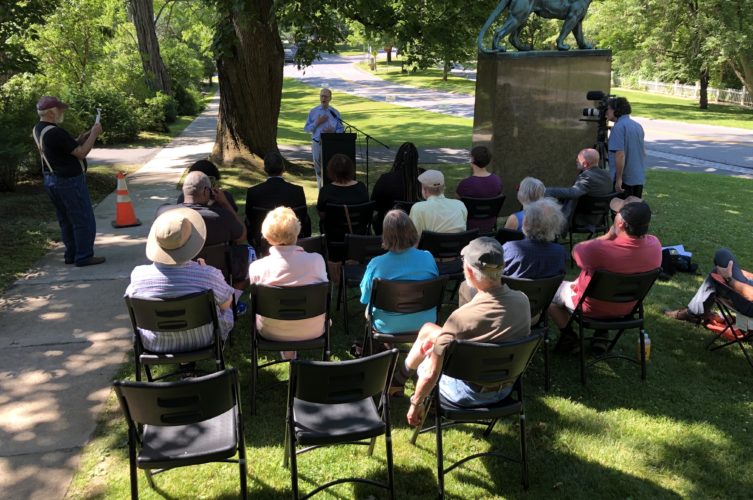 Research has brought to light an enslaved woman’s story and the death in battle of a Black Patriot from the Berkshires.

Was there slavery in Bennington?

Yes, but we knew that already: Rev. David Avery, for example, brought with him an enslaved woman when he arrived in 1780, despite the prohibition of adult slavery in the 1777 Vermont constitution. Now we know of Margaret Bowen, called Peg, another enslaved woman, who was bought and sold by Stephen Fay, proprietor of the renowned Catamount Tavern at the heart of Revolutionary-era Vermont. A ceremony to remember Peg arranged by the Bennington Museum took place in Old Bennington on June 25.

Ethan Allen and the Green Mountain Boys drank and plotted at the Catamount Tavern (a bar tab with Allen’s name on it has survived), and the Vermont Committee of Safety met there during the Revolutionary War. A stuffed catamount (a kind of cougar) mounted on the building warned land-claiming New Yorkers—and later, the British—to beware. The Tavern burned in 1871. A bronze catamount mounted on a granite pedestal replaced the original cat some years later.

Thanks to a trove of papers from the Porter and Phelps families of Hadley, Mass.—and the work of archivists and researchers—we do know a number of things about Peg. Stephen Fay purchased her and a fellow slave named Pompe Morgan, evidently Peg’s lover, in 1772 from Charles Phelps, Jr., and sold her back to the same family in 1778. Jonas Fay, Stephen’s son and one of the drafters of Vermont’s constitution, witnessed the latter bill of sale. Did the son reproach his father for holding Peg in bondage or was there some other reason for the sale? We don’t know, but the bill has been preserved. Peg gained her freedom at age 40 in 1782, when slavery had lost its legal footing in Massachusetts. Despite Peg’s living and working at the nerve center of early Vermont during a period of political ferment over the institution of slavery, her story had been little known in the state. Last week, that changed.

On the June 25, an audience of 20 or so applauded as a small brass plaque bearing Peg’s name and the dates of her enslavement mounted on a piece of Vermont granite was placed flush with the sidewalk behind the catamount statue in Old Bennington. The ceremony was part of an initiative by the Bennington Museum to broaden the scope of the stories it tells. Historical researchers alerted the Museum to records of Peg’s life and to the story of Peg and Pompe as told in the books “Earthbound and Heavenbent” by Elizabeth Pendergast Carlisle and “Entangled Lives” by Marla Miller.

As the Museum was learning about Peg, Vermont entrepreneur and philanthropist Paul Growald was starting the Stopping Stones project, the aim of which is to “bring attention to the history of slavery in local communities in order to advance racial equity.” Modelling its approach on the German Stolpersteine (“stumbling stones”), which commemorate the names of Holocaust victims in the places where they lived, Stopping Stones prepares the 4-inch-square inscribed brass tablets and hosts information on the enslaved person who is being remembered.

Up the slope from the scene of the ceremony stands a statue to Col. Seth Warner, leader of the Vermont-based Continental regiment known as the Green Mountain Boys, not to be confused with the paramilitary force led by Ethan Allen that first received that name. On August 16, 1777, Warner led his regiment against German troops sent by British general John Burgoyne and helped ensure victory at the pivotal Battle of Bennington. One of Warner’s soldiers was killed in the action: private Sipp Ives, a Black soldier who had enlisted six months before in what is now Cheshire, Mass. The late Stockbridge historian Lion Miles turned up the pension record of a Lanesborough Patriot captain who after the Battle saw “a black man on the ground that was mortally wounded” whom he recognized as Ives. Talk of a memorial to Ives has begun.

Visitors to Old Bennington have a chance to take in several other memorials related to Black history. On a wooded traffic island near the Old First Church is a monument to abolitionist William Garrison, who published his newspaper “The Journal of the Times,” precursor of “The Liberator,” in Bennington in the late 1820s. Outside the Museum itself, the centerpiece of the recently conserved Civil War monument is a remarkable bas-relief bronze of Bennington men marching off to save the Union from the slave-holding South by sculptor William Gordon Huff. At the top of the hill is the 306-ft. Bennington Monument itself, commemorating a Patriot triumph whose history continues to emerge.