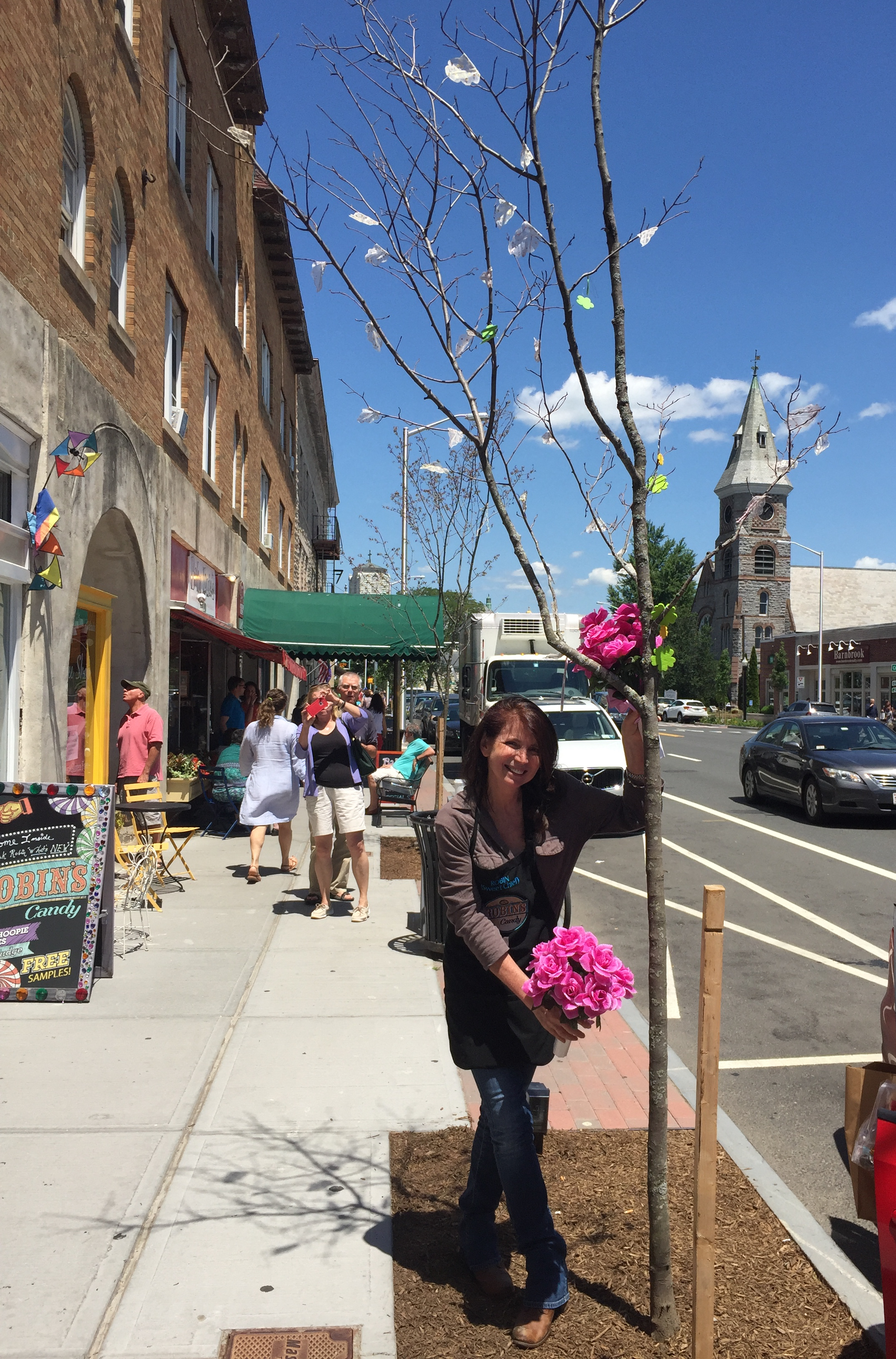 Great Barrington – When Robin Helfand, the owner at Robin’s Candy Shop at 288 Main St. discovered that the newly planted shadblow sapling in front of her store had died, she did not hesitate or wait for the town – or state high department or whoever was responsible for the plantings – to replace the tree. She took it upon herself to hang her own foliage on the barren branches in front of her store. It was the least she could do – and it wasn’t the first time she had acted to salvage the appearance of life on Main Street. Last fall, she had Ward’s Nursery donate a small hemlock for the empty tree pit. During the winter, it was the only tree left along the new sidewalks in downtown Great Barrington, after the 35-year-old Bradford pear trees had been removed during the Main Street Reconstruction Project.

Although many residents were heartbroken over the loss of Main Street’s Bradford Pear trees, whose springtime blooms and summer leaves had created a shaded sidewalk allées, downtown was expected to have been brought back to life with the planting of 81 new young trees this spring. The plantings were to be the final element in the $5.4 million rebuilding of the Main Street corridor.

Unfortunately, some of the trees are now dead or dying, with four or five shadblows confirmed as unsalvageable, according to arborist Tom Ingersoll.

“It’s a real disappointment to me that the few final items [in the renovation] are not being attended to with urgency,” Helfand told the Edge, referring to promises she was given by state workers and town officials that the trees’ replacement could take up to a year.

Ingersoll, a Massachusetts Certified Arborist working as a consultant for MassDOT throughout the renovation, confirmed to the Edge that, as per contract, the trees would be replaced within a year. He added the possibility of the removal and replacement as early as the coming fall season.

Still, Helfand is frustrated. “Now that trees that are dead or dying have been identified, it would be better if they were removed and the tree pits left empty instead of having dead trees there.”

Acknowledging the loss, Town Manager Jennifer Tabakin told the Selectboard, however, that there was a “delay in getting all the different types of plants [trees] for lack of availability.” She said the town was working on maintaining what was planted and on getting those replacements.

Helfand suggested a possible town-organized movement to remove the trees if going through the state would take too long. “I want customers seeing as appealing a street space as possible.” Several merchants, including Helfand, have come together and agreed to privately fund the removal of the trees if necessary.

But Ingersoll still has not given up on the recently planted trees. “It’s hard to tell if they are dying or growing back,” he told the Edge. “This is still a work in progress, it changes day to day, and I’m going through there constantly and checking. I’ve seen more trees stabilize than I have seen get worse.” Original estimates of 14 dead or dying trees, he added, have dropped down to 4 or 5 confirmed dead trees. “If we had tried to make that decision two weeks ago we would have ripped out 14 trees.”

Shadblows are an early-blooming tree, and Ingersoll attributed their health problems to a heavy freeze on the night of April 4th while they were still in the nursery. “It destroyed flower buds and leaf buds or at best deformed them,” he said.

For now, the town is urging pedestrians to stay out of the planting pits surrounding the trees, as compacting the soil can harm the roots. Since annual precipitation this year is 4 or 5 inches below average, the emphasis is on watering the trees, which will be done by state workers.