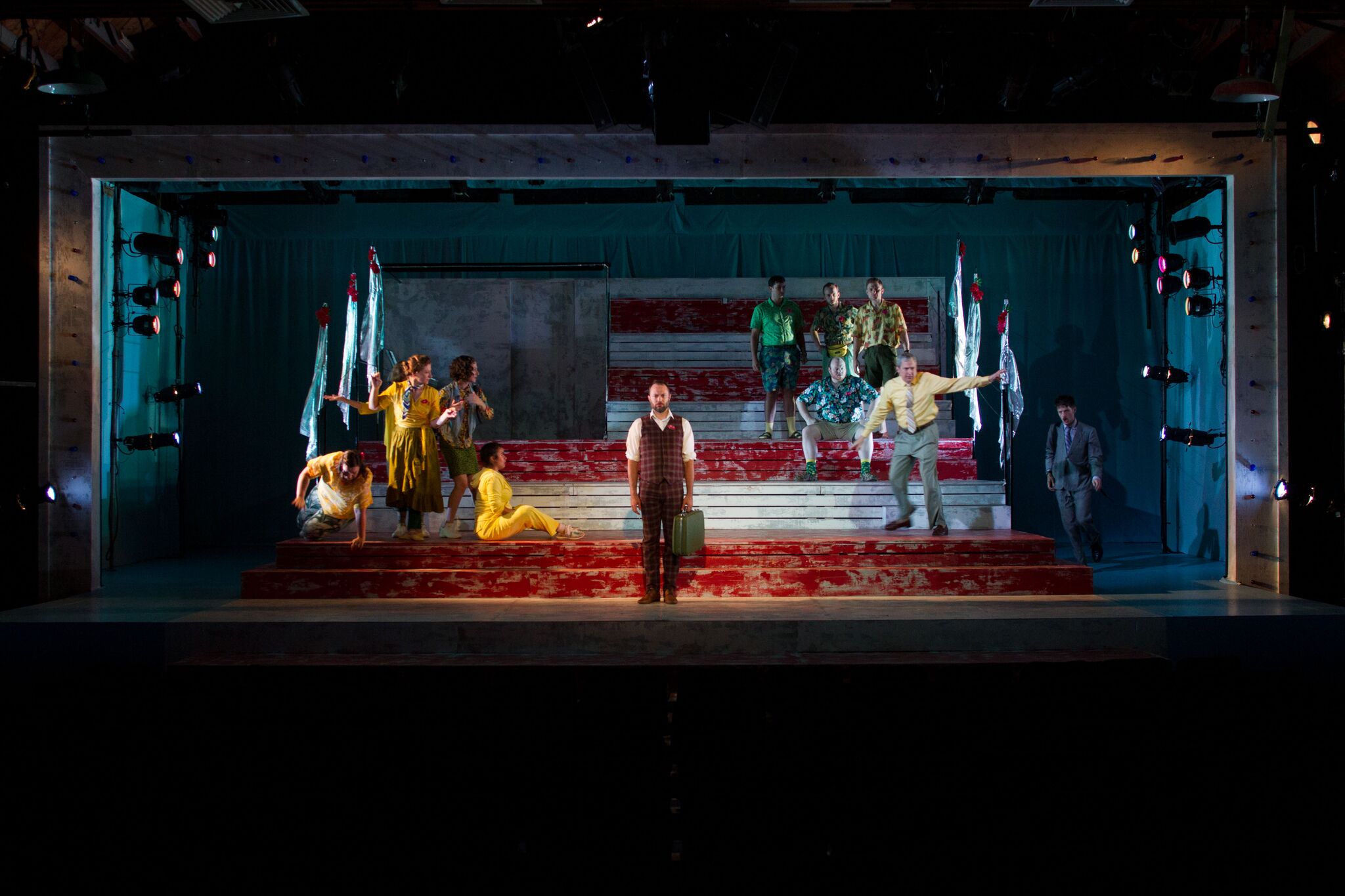 THE MUSIC MAN opened 60 years ago on Broadway, and won the hearts of critics and audiences, alike. In fact, it was so popular that when TONY Award time came around, it took five of the coveted statues and snatched “Best Musical” away from nothing less than WEST SIDE STORY.

Sixty years can be a long time. We age in 60 years. We weaken, shrink, begin to lose our eyesight and get a bit short winded when we climb the stairs. With the realities of aging firmly in focus, how well can THE MUSIC MAN hold up especially when so much has happened in the past 60 years?

If the version of Meredith Willson’s grand musical to be considered is the current production at The Sharon Playhouse in Sharon, Conn., then age is only a number, and this show has one great number after another.

Morgan Green, Sharon’s Resident Director for the summer of 2017 has taken a treasured artifact of the American theater and turned it into a lively, energized, engaging and just plain fun evening. Her cast members seem to bounce around the intriguing set designed by Carolyn Mraz, gaining energy with each leap while never losing the stamina to keep songs on pitch and dance moves in step.

It’s quite amazing to watch the ebb and flow of the evening as it is controlled by Robert M. Johanson as the loveable scoundrel “Professor” Harold Hill. This man can sing, dance, act, draw the audience in to every subtle move and get even the hardest heart in the cast to finally cheer him on. His character has everything planned out to the minute … except for falling in love, which makes the adventure so much fun.

He is equally matched by Elizabeth Thomas as the perceptive, sensitive librarian and music teacher, Marian Paroo, presented with seemingly effortless elegance. She can be stern, direct and aloof, then pivot at the turn of a line and be caring and supportive and strong. She is Prof. Harold Hill’s undoing and his redemption, all in one evening.

The storyline, if, perchance you’ve never been swept up in the rush of “Seventy Six Trombones” or been fired up by the notion that “Ya Got Trouble” right here in River City, turns on the appearance of a confidence man, a swindler, in a small Iowa town. Pursued by his reputation, but needing to pull another scam, “Professor” Harold Hill sells the good people of River City on the dream of having a band, complete with uniforms.

Hill’s selection of the arrival of a pool table at the local billiard parlor as the indication of just how much the town needs the salvation only a band can bring puts him at odds with the owner of the billiard hall, Mayor Shinn, played hilariously by Vin Knight who seems born to the part of the bumbling, fumbling, blustering defender of small town values and … pool tables.

Dancing, singing, sight gags, young love, and swelling civic pride ensue. It’s only when Charlie Cowell, a traveling anvil salesman, makes a brief stop in River City that the entire fantasy runs the risk of collapsing. Milo Cramer nearly stops the entire show with a soliloquy that has everyone in the audience on the edge of their seats. He is brilliant in his attempt to unmask the false professor, an effort that almost succeeds until … well, if you haven’t seen The Music Man, then we won’t add a “spoiler alert” to temper your evening. This is a summer gem not to be overlooked. This is wonderful American musical theater brought up to date and up to new levels of excellence by a supremely talented team.

The season at Sharon Playhouse, engineered by Artistic Director Johnson Henshaw, has offered opportunities to think, to be challenged, to explore, to marvel, to discuss and now to be energized by a carefully crafted and grandly acted standard made fresh and alive. Morgan Green, the young director who ventured “into the country” to bring her imaginative, sometimes challenging theatrical vision to a local stage has been able to weave contemporary techniques with aging stories and make them as fresh as one might imagine.

Her use of video within THE MUSIC MAN is perfect illustration of the point. It’s not trite or merely a clever artifact. It moves the story along and gives the audience great insight into the characters, what they think, how they feel and (dare we say it) how they mirror us. That is theater at its best … sometimes a challenge, sometimes an amusement, and always a mirror.

The assembled cast of THE MUSIC MAN is filled with talented individuals who each bring nuance and imagination to their roles. Young Myles Crain, who has been seen in several local productions during his budding career, presents Winthrop Paroo as both a wounded young man to be comforted and an unbridled force to be reckoned with – quite an accomplishment. Amaryllis, one of his sister’s piano students, longs only to have Winthrop talk to her. When Katelin J. Lopes as Amaryllis, another local talent, lends her lovely voice to the gentle “Good Night, My Someone” with Marian, the librarian, the song presages budding romances that are about to blossom.

Celebration of excellent work flows across the Playhouse stage and into the dark recesses of the wings, where the technical specialists have worked beautifully to create an evening of rich entertainment. Matthew Krob, Robert Bannon, Daniel Walstad and Jacob Pressley form a wonderfully comedic barbershop quartet. Musical Director Granville Lloyde Mullings, Jr. and his associate director Christopher Piro have not only coached and blended the cast voices, but lead a bright, crisp orchestra. Choreographer Chris DeVita, who has developed a following with summer residencies at The Wassaic Project uses the entire theater as his dance floor, with great result. The audience wants to dance along, a fitting tribute to the fine effort.

THE MUSIC MAN is a grand way to end a groundbreaking season at The Sharon Playhouse. The show runs through Sunday, August 20th, with evening and matinee performances. Tickets can be secured by calling the box office at 860-364-7469 or on line at www.sharonplayhouse.org. Don’t let the parade pass you by. Somewhere within the 76 trombones, the 110 cornets or “more than a thousand reeds, springing up like weeds” there is surely a spot for you.