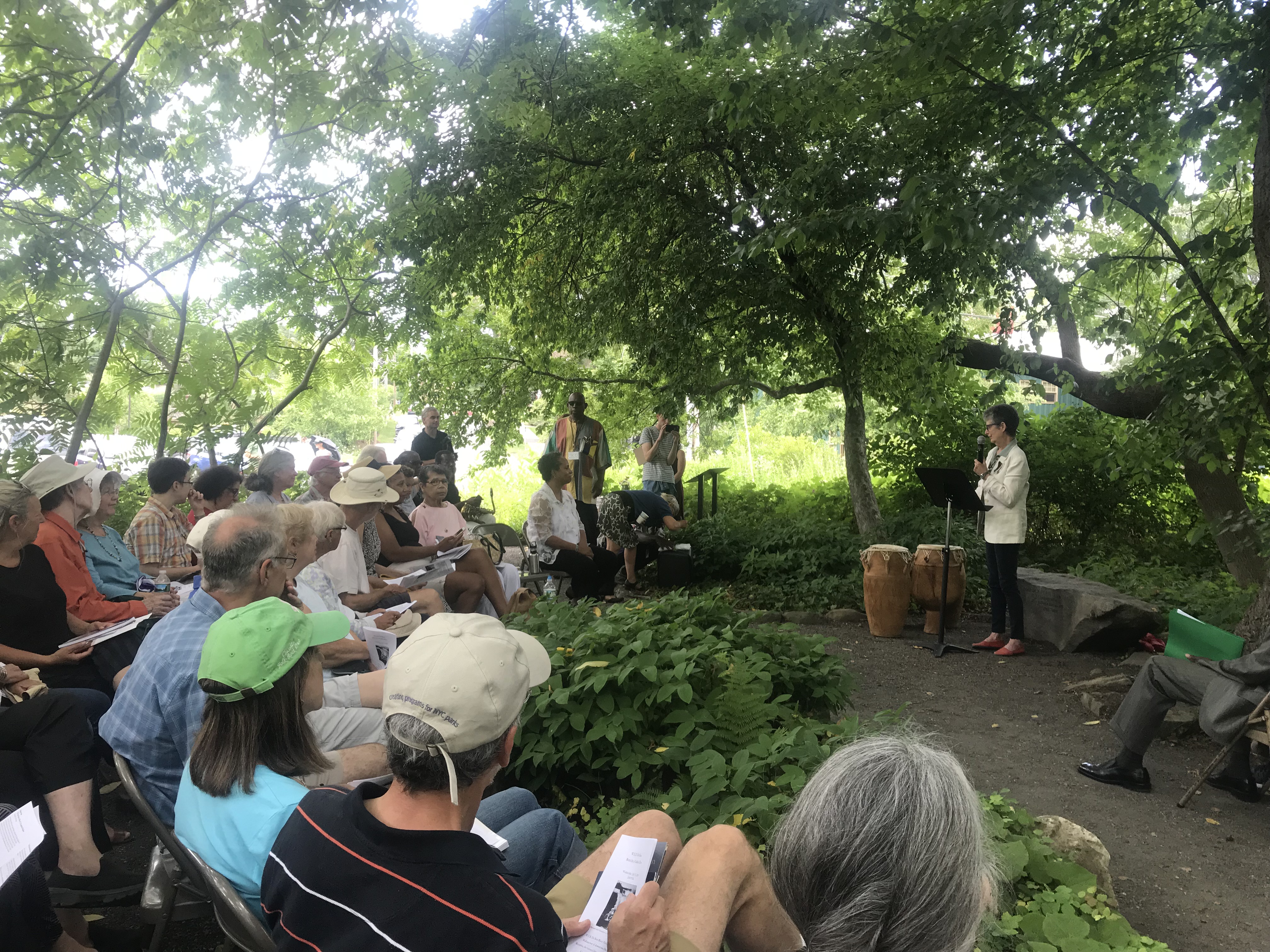 Great Barrington —“Something powerful happens when you have the opportunity to tell Dr. Du Bois’s story, where his ideas actually formed,” declared Rachel Fletcher. As the wind whipped through the trees along the River Walk bordering the Housatonic River, a crowd of roughly 70 people, 15 of whom represented organizations such as the NAACP, The Land Conservancy, and various faith groups gathered at the Church Street entrance to the River Walk to celebrate the 150thbirthday of the man Fletcher and many others believe has not received the recognition he deserves, W.E.B Du Bois.

At Town Hall, moments before the celebration, Carol Connare, the director of communication and development at UMass Amherst Libraries and Professor Whitney Battle-Baptiste, the director of the UMass Du Bois Center, presented the town of Great Barrington with a framed copy of Du Bois’ 1930 speech, “The Housatonic River.” Selectman Ed Abrahams received the gift on behalf of the town, and now the speech, which resides in five frames along the stairwell in Town Hall, can be read by the public. “He was really the first environmentalist,” Connare exclaimed as those attending the presentation huddled around the frames to read the speech.

Meanwhile, back at the foot of Church Street at the Du Bois memorial site by Housatonic River, the audience had gathered in folding chairs around Rachel Fletcher, the founding director of River Walk, the path along the riverbank from Bridge to Cottage streets. She introduced the environmental legacy of Du Bois, focusing on the Civil Rights activist’s advocacy for environmental protection and the cleanup of the Housatonic River years before the “environmentalism movement” and Rachel Carson’s Silent Spring captured the American zeitgeist.

She then introduced writers and scholars who would read from his work – and from other African-American writers of the period. Ted Thomas followed with a presentation of “The Negro Speaks of Rivers” by Langston Hughes. Thomas’s deep steady voice carried through the audience, “I know rivers: I’ve known rivers ancient as the world and older than the flow of human blood in human veins…”

After the poem, Mary Nell Morgan-Brown led the audience in what she called a vocal interpretation of “The Sorrow Songs” from Du Bois’ book, The Souls of Black Folk. A group of 12 people, representing the NAACP Berkshire County Branch, the Clinton Church Restoration, UMass Amherst, Housatonic Heritage, the W.E.B. Du Bois Center and the African American Heritage Trail took turns reciting passages from the same Du Bois speech that was gifted to the town. In the speech (click here to read it), which Du Bois originally delivered in 1930 as the commencement address at Searles High School, he talks about the “golden river” of the Housatonic whose waters were gold not by some miracle of nature, but because of pollution from dyes disgorged into the river from paper mills upstream. Fletcher noted after the ceremony that, in a time when environmental protections are being rolled back at the EPA, Du Bois’ words are more prescient than ever.

The ceremony ended with a elegy duet performance by the master drummer, composer and dancer Kwaku Kwaakye Obeng and tenor and soprano saxophonist, Antoine Roney.  (See video below.)

A walking tour of the River Walk and Great Barrington sites followed as guides led the participants to the former Clinton A.M.E. Zion church on Elm Court for a reception. The church, which Du Bois attended, became derelict years ago but is being restored, with the national Parks Service granting $400,000 towards renovating the peeling white walls and crumbling interior to turn the space into a museum dedicated to African-American history.

At the reception, Dennis Powell, the president of the NAACP’s Berkshire branch, cut slices of a carrot cake he had baked with a picture of Du Bois on its icing, and then handed them to those joining the celebration.

Du Bois, a sociologist, historian, author, and activist who cofounded the NAACP, graduated from Harvard University and became the first African-American to earn a doctorate. He emerged as national leader of one of the first civil rights movements in America, The Niagra Movement. In a three-part series for The Berkshire Edge, Bard assistant professor, Justin F. Jackson, chronicles the politics and legacy of Du Bois in astonishing detail. His legacy, both nationally and here in Great Barrington, is shrouded in controversy not because of Du Bois’ fierce advocacy for the rights of African-Americans but because, at the age of 93, joined the American Communist Party, and moved to Ghana where he died.

Du Bois’ communist ties have given fodder to his detractors in Great Barrington, but as celebrations at the River Walk show, Du Bois’ legacy cannot be reduced to a single political ideology or movement. Rachel Fletcher spoke to the complexity of Du Bois, telling The Edge that, “his love of rivers and his dedication to environmental justice play a very small part, but can be a lens through which to understand his fuller achievements. There is no better place in the world to tell this part of the story, at the very spot where he was ‘born by a golden river,’ as he wrote time and again.”

As people poured glasses of lemonade and ate cake in the front lawn of the Clinton Church, Du Bois’ legacy appeared to be revitalized in the town where he grew up in.  Fletcher added, “On the matter of why Du Bois was ostracized, it’s important to understand his thoughts and actions in the context of the relentless racism he was forced to endure.”