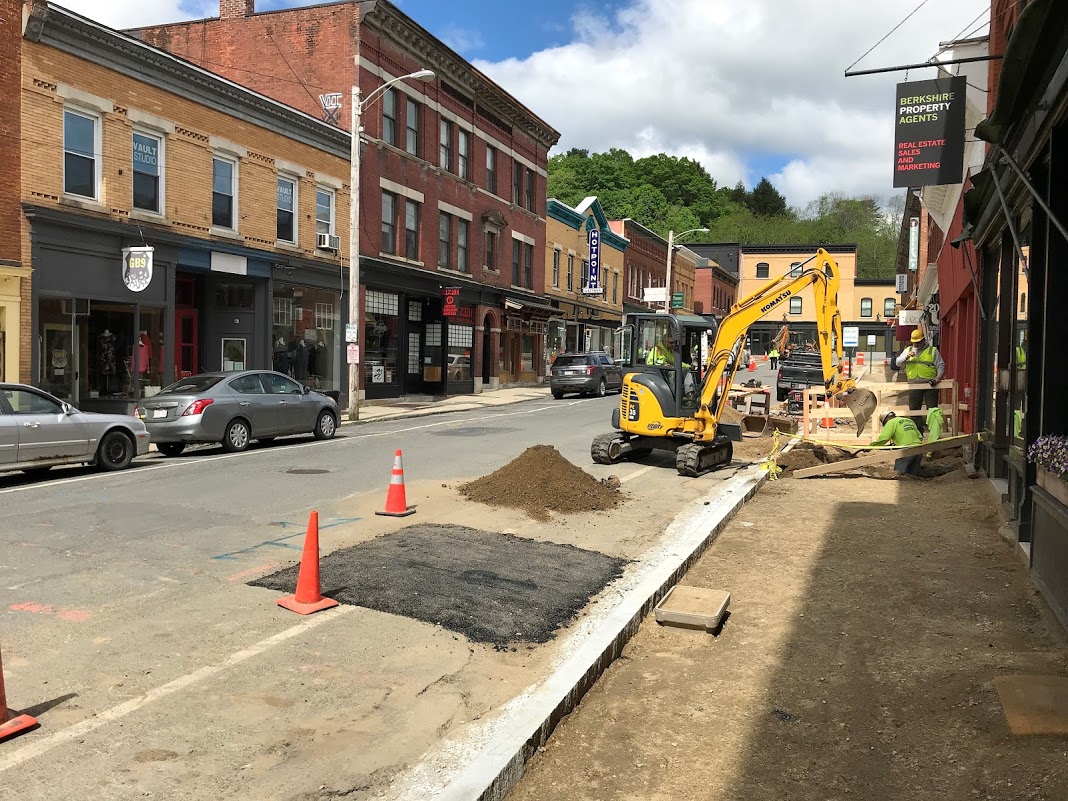 “It has taken a long time to break ground on this project but we’re happy to see it moving along pretty swiftly, the work on Railroad Street in particular,” Rembold said on Wednesday. “You probably saw today the curb was installed on the north side and once the curb is in, that’s really great because you can start pouring sidewalks after that.”

The much-delayed redo of Bentley, Bridge, School, Church, Railroad and Elm streets started this week and will be paid for with portions of a $2.1 million MassWorks grant that was announced with great fanfare in October 2015, when the state’s Assistant Secretary of Housing and Community Development Juan Vega stood on the steps of Town Hall to deliver the good news along with town and regional officials.

The town expects to have the north side of Railroad Street “buttoned up,” including the installation of bases for decorative light poles, by the end of this week. Then we head into the long Memorial Day holiday weekend and a few days later, the Berkshire International Film Festival. Work on the street improvement project will halt during BIFF, which runs from Thursday, May 30, to Sunday, June 2, Rembold said.

The town will own the light poles and pay for the electricity needed to power them. A transformer and distribution box will be installed on the sidewalk near the bend on Railroad Street, but Rembold said it should not impede future activity in that area.

After BIFF, work will commence on the south side of Railroad Street. The old sidewalks—now jagged and pockmarked—will be demolished, new curbs installed and fresh concrete poured.

Preliminary paving will start on Church Street early next month, though most of the other paving will be done over the course of just a few days in late June.

“So the paving is actually one of the quicker aspects of this project,” Rembold said.

Curbing and some sidewalks have been poured on Elm Street. But those who are used to parking on Elm Street will be disappointed. The curb in front of the Berkshire Record building has been widened and the six or seven parking spots on the south side of Elm have been eliminated, adding to the parking crunch in that part of downtown.

Curbing on Bridge Street started last Wednesday down at the eastern end near the bridge over the Housatonic River. A crosswalk across Bridge Street is being prepared for the future River Walk expansion so that people can safely get from the existing River Walk to the River Walk extension, which will bring the scenic walk south beyond the Great Barrington Fairgrounds to Brookside Road.

In addition, curbing has been installed in front of Powerhouse Square, the mixed-use development about to open at the western end of Bridge Street. The building is comprised of residential condominiums and the first floor will house the new headquarters of the Berkshire Food Co-op.

The second phase of Powerhouse Square will see the construction of a 32-unit condominium complex and parking garage set back to the south, closer to the John Dewey Academy property, also known as Searles Castle.

“Powerhouse Square, which was always a wild card in this because we couldn’t control their schedule, has set their curb,” Rembold explained. Brian Cohan, a partner in the developer, Benchmark Development, confirmed that the sidewalk concrete has also been poured. As part of its site plan review, Benchmark was required to construct a public sidewalk between the building and Bridge Street.

“The fact that that’s in helps us proceed with the rest of the Bridge Street work, all the way up to Main,” Rembold said.

“That seems like a very narrow sidewalk,” Selectman Steve Bannon observed. “Does that meet all the specifications?”

Rembold said the Powerhouse Square sidewalk meets the required five feet of width. Selectman Ed Abrahams joked that perhaps the sidewalk only looked small because the three-story building it serves dwarfs anything else on Bridge Street.

Rembold said every effort is being made to preserve access to businesses on the affected streets and that it has been a challenge for construction crews to deal with the amount of erosion that has occured this spring.

“We’ve had a lot of rain, so when something gets dug up, it tends to erode, so that’s been difficult,” Rembold added. “I think once this is done, Railroad Street will be a lot nicer and you’ll forget how bad those sidewalks were.”

Perhaps the greatest relief to pedestrians and business owners alike is that nothing could be as disruptive and inconvenient as the massive $6 million Main Street reconstruction project of 2014–16.