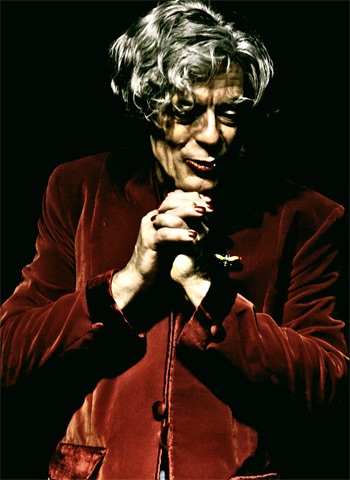 Painter, writer and performer Douglass Truth in his one man show An Intimate Evening with Death, Herself, coming to Lauren Clark Fine Art from August 11-14. Truth’s comedy explores the nature of death. Photo: Kathleen Drieier

Great Barrington — At 63, Doug Truth keeps on surprising himself.

“I was never into theatre or painting,” says the performance artist and painter, back in the Berkshires from California with his show “An Intimate Evening with Death, Herself” at Lauren Clark Fine Art on Railroad Street.

It’s a dark comic love story in which Truth plays his fictional twin sister Dorothy, an old waitress who tells the story of how she became “Death, Herself.” She met Death at a bar and forged a friendship with him in a Denny’s booth over a period of weeks, and together they came up with a “new, improved death.”

But then Death dies and Dot, because Death liked her so much and thought she had “a knack for the job,” replaces him.

But Truth really did almost meet with death after a brain infection left him in a three-day coma in 1998.

“That really did something to me but I’m not sure what,” said the former Pittsfield resident. “When I came out there was something different.”

It began with the theme of death in some of his art, which lead to the desire to write about it. That in turn sparked the performance impulse.

Living and working among artists during the cultural resurgence in Pittsfield that began around 2001 with the Storefront Artists Project, Truth was more than encouraged.

He performed an early incarnation of the 90-minute show at the Dreamaway Lodge in 2006, with an audience of “mostly my friends — the worst kind of audience.”

“I had a couple of martinis – I was so terrified,” he said of a show that is “way different now.”

But the response was good, he said. Dreamaway owner Daniel Osman – a former actor, director and producer – said it had potential. “He said, ‘it’s really rough but you need to keep working on this.’ ”

Truth tested the show again in 2009 when he moved back to northern California. Later, he rented a theater, the show was a hit, and from there he kept “doing and refining” it, changing the tone. The Nevada City, California, resident realized he truly had something.

“I felt like I had to choose between painting and the show.”

He did 25 shows of “Death, Herself” last year. He says the more he performs it and the more varied the settings, the better he gets at it and the more refined the show. “You can practice by yourself all you want, but you really need an audience.”

And eventually he would publish “Everything I Know About Death, Subject to Verification,” an autobiographical work that spans from his early life to the story of Death, Herself. Before she becomes Death, Dot, we learn, is telling Death how to get people to stop ignoring him. “We’ve got to make you more presentable, more approachable. Maybe like your accountant at tax time.”

Dot also wants him to lose the “skulls and the scythe and the skanky robe.”

Truth’s paintings often feature landscapes and nature, especially flowers. He also paints buildings and houses in way that enlivens them; he says this was inspired by his interest in architecture and civil engineering, and that it gives him an interesting perspective in which lines of structures appear, but never too sharply, amid landscapes or flowers.

His “Revolution of Flowers: A Manifesto,” is a small book of his paintings in which he adds a caption to each. This is where the flowers get to talk and say what they really think about their surroundings. “Something has to be done,” says a dahlia. “In a girl’s room somewhere, the plan is hatched. Beauty is the key.”

Before he started painting, Truth was a sort of man-of-all-trades. There was no college, there were no art classes, no training, he said. “I never knew I had an aptitude.”

Born and raised in Indiana, Truth worked as a surveyor and civil engineer on the Alaskan pipeline in the 1970s. He’s also worked in restaurants and taught English, among other things.

He’ll be busy with “Death” over the next two months as the show moves to two venues in New York, including the United Solo Theater Festival. If he sells out there, he could be doing that show into November.

Yet he keeps right on painting. Lauren Clark Fine Art is also showing about 10 pieces of his work right now. His work is included in “COLOR ENVY, Three Great Minds in Living Color DAVID EDDY JULIO GRANDA DOUGLASS TRUTH,” August 6 through August 28 at the Lauren Clark Fine Art Gallery. A reception for the artists takes place Saturday, August 6, from 4-7 p.m.

And when he’s not painting (or, with Dorothy, refining “Death Herself,”  he likes to make videos, such as a YouTube series called “Words Fail Me.”

“There’s a preacher side in me,” he said. “It’s an enormous amount of work. But I love to work.”

To watch the video, see link below:

An Intimate Evening with Death, Herself will run every night at Lauren Clark Fine Art, 25 Railroad St., 7 p.m. from Thursday, August 11 to Saturday, August 13; and Sunday, August 14 at 4 p.m. For tickets and more information, see the Berkshire Edge calendar, call the gallery at (413) 528-0432, or visit deathherself.com. Truth will also do a painting demonstration and talk at the gallery on Sunday, August 21, from 11 a.m. – 1 p.m.