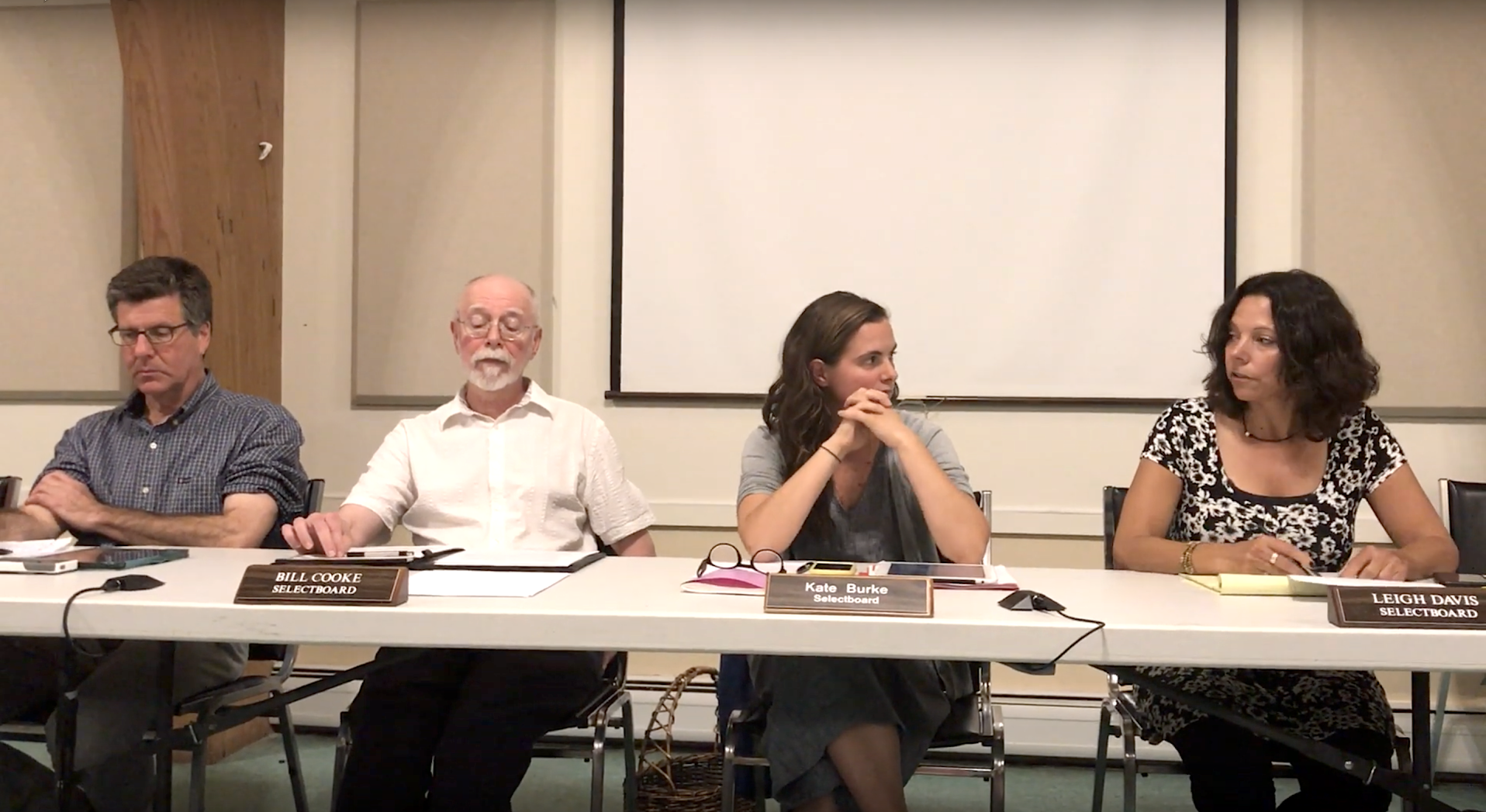 Great Barrington — It happens all the time in politics and public policy: After lengthy deliberations, elected officials reach a compromise that almost no one likes.

Such was the case Monday night when a divided selectboard voted to repave Lake Mansfield Road and keep a lane of the road open one-way for approximately 1,000 feet from the boat launch at the southern end, north to the beach and its parking lot.

The 3-2 vote by the selectboard was an about-face and a rejection of the opinion of the Lake Mansfield Improvement Task Force, which had been charged with studying the matter and recommending a course of action.

The decision was reached after the recent recommendation of Town Hall staff that the road receive a fresh layer of asphalt, at a cost of about $50,000, and remain open as a two-way road for the time being.

After listening to a presentation from the task force, the board voted in June to close that stretch of road to all but emergency vehicles and a couple of property owners abutting that section of the road.

Click here to read the task force’s four-page report recommending the permanent closure of Lake Mansfield Road on Nov. 15 and the road’s replacement with a recreation path in that corridor.

“Closing the road at this time seems premature in staff’s opinion,” Pruhenski told the board at the meeting held in the Claire Teague Senior Center. “We suggest a thick coat of asphalt and defer the official closing date until a future time.”

See video below of the discussion, public comment, vote and reaction afterward on the selectboard’s decision to keep Lake Mansfield Road open one-way. There is also some discussion during citizen speak of the proposal from Fulcrum Enterprises for a cannabis grow facility on VanDeusenville Road:

Pruhenski cited a number of reasons for the decision. Click here to read the executive summary of the staff recommendation. Among the problems with a permanent closure, Pruhenski said, is the lack of a plan to deal with a “turn-around and detour of vehicles” from the sudden closure of the Division Street bridge earlier this month. Along with the closure late last year of the Cottage Street bridge, closing Lake Mansfield Road would create yet another detour that could prove especially problematic to emergency services, the summary said. Fairview Hospital is only about half a mile from the southern end of the lake.

In addition, Pruhenski said West Sheffield Road will become one lane “very shortly” and may ultimately be closed for repairs. VanDeusen later told The Edge a narrow area with a steep embankment south of the Wyantenuck Country Club is starting to give way from the bottom. The road is not in imminent danger of collapse but ultimately, he said, it could be a multi-million-dollar project to keep the road open.

“The closure of a part of Lake Mansfield Road would create another detour that could be avoided for the time being,” Pruhenski said.

Pruhenski said that while he, Rembold and VanDeusen appreciate the hard work the task force put into its recommendation, “after further review, we feel that this closure is not in the best interests of the town at this time.”

When board Chair Steve Bannon opened the floor to public comment, passion flowed from both sides. Approximately 20 people spoke, some at length.

Christine Ward and Dale Abrams of the task force pleaded with the board to take the long view. When Ward first saw the staff recommendation on the agenda and information packet for the selectboard Monday’s meeting, she was surprised because the staff recommendation had not been disclosed to the task force earlier. Click here to read the letter Ward read to the board.

Abrams, who has been a member of the task force for 10 years, told the board the task force “considered deeply all the implications” and theirs was “not a quick decision, but a slow and deliberative process.”

“Think deeply and not short-term,” Abrams pleaded. “The decision to close is the right move forward.”

Others, including Christian Hill Road resident David Ryel, objected to the increased traffic the closure would cause in the affected neighborhoods.

“We shouldn’t make a short-term decision that’s going to exacerbate the traffic problem in this town,” Ryel said.

Ryel characterized the task force as made up entirely of residents of Great Barrington’s upscale “The Hill” neighborhood who would benefit greatly from the road closure through less traffic and the resulting increase in property values.

“Likewise, there is a conflict of interest with any selectman who lives in that neighborhood and they should recuse themselves from voting on this topic because they likewise stand to benefit from the road being closed down,” Ryel said.

Selectboard members Bill Cooke, who also sits on the task force, and Leigh Davis live in The Hill neighborhood and support the closure. Both participated in the discussion and were the dissenting votes in the selectboard’s decision to keep the road open one-way for the time being.

Neither appears to be conflicted, according to the self-dealing and nepotism section of the state’s conflict-of-interest laws for municipal employees. As for financial interests, Section 19 says, “The financial interest must be direct and immediate or reasonably foreseeable to create a conflict. Financial interests which are remote, speculative or not sufficiently identifiable do not create conflicts.”

The board began its discussion and, after considerable back-and-forth, selectboard member Kate Burke suggested a compromise: repave the road and keep it open one-way from south to north before eventually closing it at an unspecified date. This was also the task force’s second choice.

Davis’ motion to close the road failed 2-3, with only Cooke and herself voting for it. Burke’s motion passed 3-2. Davis seemed exasperated by the outcome. Cooke framed it as a question of preserving the road or preserving the lake.

VanDeusen said he would check with a traffic engineer as soon as possible to obtain advice on the best way to convert the road to one-way with signage, road markings and the like.

Lake Mansfield is regarded as a gem in the heart of Great Barrington, and one of the few lakes in the state surrounded by neighborhoods and relatively close to a downtown. The battered road carries an average of 500 vehicles a day.

It serves not only the recreation area with a beach, parking lot and hiking trail, but is also used as a shortcut between one part of town and another. Driving can be treacherous, as is walking and biking along it, particularly in the summer, when the population increases and the lake is used for swimming, picnicking and fishing.

Lake Mansfield road connects Christian Hill Road to the north and the upscale The Hill neighborhood to the south. About 1,000 feet of the road between the town beach and boat launch at Knob Hill Road is in dreadful shape. Portions of that rough patch near Whale Rock are in danger of falling into the lake, with only a few feet of buffer between the road and the water — in some cases, even less.