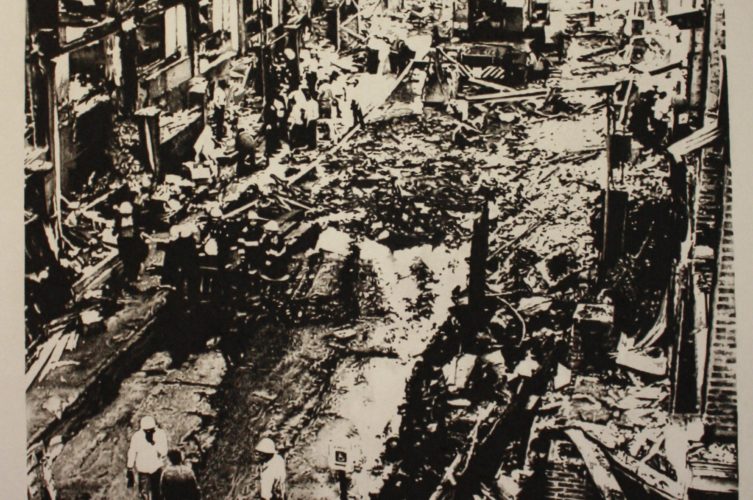 Disaster isn’t a word you will find often used in the Berkshires.

Occasionally, it rears its ugly head at a local town meeting, or by an ill-informed

Not so at the Geoffrey Young Gallery, where currently on display, a dozen or so artists

were given the assignment to take this wanna be four-letter word and apply their unique visual skills.

I am an expert in the world of disasters.

Having watched Hurricane Katrina, destroy my home, city, and 25 years of sketches, film, photographs, LP’s and art collection. And then a few years later, aiding Hurricane Sandy victims by driving to Housing Projects in Far Rockaway, with a trailer and truck loaded with basic medical supplies, tampons, batteries, warm blankets and sodas, I was the man for this story.

Yes, disaster and me tend to walk hand in hand, bar room to bar room, poem to poem.

And so it seems for several of the artists on display at GYG.

As usual, the man himself was there to greet me with his usual inquisitive know-it-all smile.

And once we had established the reason for me trespassing into his kingdom, I was duly forgiven and rewarded with a sincere and always intelligent analysis of each work on display.

For me, I try not to initially think about what I am looking at but rather feel my way through a picture or painting and as my guide drew my attention to a certain exquisite detail here or thundering brush stroke there I couldn’t help but question the motive behind some of the works.

All of this collapsed when I stood six inches away from Andy Mister’s exquisitely rendered masterpiece, “Osage Ave.” At first, I thought it was a photograph taken in Afghanistan or Iraq. You know the one. The one we have become comfortably numb with. Where a seemingly normal street is totally destroyed by an unmanned Drone warplane guided somewhere in Blue Hills of Virginia.

There were even a few crying children to complete the frame.

What I was staring at happened in our own backyard not so long ago. I was hearing a part of our dirty bloody past retold with great accuracy. I was hearing about the MOVE organization founded by John Africa.

MOVE was a loose knit mostly black group whose members adopted the surname Africa, in much the same way as some of us zipper-drenched disenchanted low-life Londoners adapted the first name John in the early punk rock daze of 1977. Whereas we popularized the anarchy symbol, made records in garages and attempted to break anything and everything up, MOVE advocated a back to nature lifestyle and protested through the streets of Philadelphia against technology.

The group lived communally and frequently engaged in public demonstrations. Consequently, in 1985, the town’s founding fathers and Pennsylvania’s very own protect-and-serve state police deemed it wholesome to drop a BOMB from a helicopter on the headquarters of these pesky vocal black hippies. The explosion and ensuing fire killed 11 people including five children and the group’s leader. In addition, approximately 60 other (non MOVE-affiliated) homes were destroyed as the entire block burned to the ground.

For several minutes after Mr. Young had finished telling me the story I felt physically sick.

And yes, he concluded, they were Yankees.

Aside from Philip Knoll’s, beautifully rendered drawing, “Crumble,” depicting headshots of celebrities who have come to their own tragic demise and Morgan Bulkeley’s set of four mouthwatering surreal gouache paintings of his beloved birds attacking Mickey Mouse or flying through a toxic landscape chased by the AIDS virus, the rest of my tour was quite honestly awash to no fault of the other works on display.

I think, consciously or unconsciously, Mr. Young sensed my giddiness and rushed out to get, in his own words the hottest bloody coffee I will ever drink. Upon his return several folks were also viewing this jewel of an exhibition and with my usual fear of crowds setting in I staggered out the door.

Walking down Railroad Street, pen and paper in one hand, boiling coffee and a camera in the other, looking at all the afternoon shoppers, children busting out of school and tourists enjoying this perfect New England sunny day, happily oblivious of drones flying a few thousand miles east of us, getting ready to take care of some more wholesome business, I ushered a silent walking prayer to victims of disasters everywhere and raised the burning liquid to my lips in salute to the few who silently toil in keeping art real. The few who are unafraid to burst the pretentious ego-inflated bubble of current artistic trends laced in cocaine and fortified with tasteless wine and cheese.