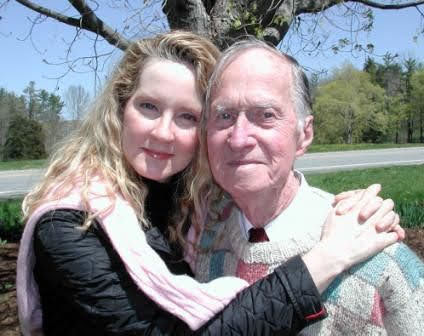 Salisbury, Conn. — Most people, even those who have been exposed to heinous crimes and hellish misadventures, are fascinated by missing person cases. Perhaps it’s the simple element of mystery. Maybe it’s just morbid curiosity.

Whatever the case, I, too, am fascinated by these stories. On a muggy summer evening in 2007, 91-year-old Thomas Drew, a well-known retired fashion designer who lived in a remote far-northern section of Salisbury, and whose property literally bordered Sheffield, Massachusetts, went missing. The case remains unsolved. Indeed, there are remarkably few solid leads and little physical evidence to speak of. But there are lots of little things. More on that later.

While there is little hope at this point that Drew is still alive, his daughter Allison Drew, who was in England at the time of her father’s disappearance, continues her quest to find the truth. Her efforts have resulted in a new memoir, “Searching for My Missing Father: An American Noir.”

It’s 200 pages of reflection and reexamination. But it’s also a sobering look at law enforcement procedure. Based on her observations of how the Connecticut State Police handled the case, she makes a timely case for police reform. Indeed, Allison Drew can claim victim status as well. After protesting the police handling of her father’s case, she says she was arrested for criminal trespass of her father’s home.

On the evening of July 21, 2007, Drew, frail and suffering from dementia, went missing. He either wandered off his property at 24 Ravine Ridge Road, as his caretaker insisted, or he was taken somewhere, never to return. Allison, a now-retired expert on African politics, subsequently returned from England where she was teaching at the University of York. Her sister Bettina returned to Connecticut from Missouri. Thomas Drew’s wife, Alyce Drew, died in 1984.

In her memoir, Allison Drew changed the names of key figures in the story, including the caretaker, the substitute caretaker and state police detectives who worked on the case. Elected officials and those who are dead are referred to by their real names. This was for legal reasons, she told me.

Disclosure: I covered the story briefly for the Lakeville Journal. I have known the substitute caretaker, whom Allison Drew calls Pamela, for 15 years. The full-time live-in caretaker, known in the memoir as Matt, ran for town council in neighboring Dutchess County, New York, where I worked as a journalist and interviewed him about his candidacy.

I have chosen to refer to them here by their pseudonyms, but their real names are available in numerous news reports about the Drew case that are still available online, including a terrific one by friend and colleague Brigitte Ruthman, a Sandisfield resident who covered the case for the Republican-American newspaper in Waterbury.

Here’s the long and the short of it. Drew was with Pamela, his substitute caretaker, because Matt, his live-in caretaker, was away visiting his girlfriend in New York. Pamela said, early in the evening, after they had finished supper, Drew got up to leave while they were watching a movie. “I gotta get going,” he said. When Drew didn’t return after a few minutes, Pamela said she went looking for him and he was nowhere to be found.

Pamela called the Connecticut State Police, which responded with several troopers who combed the area and brought in a bloodhound, which tracked Drew’s scent briefly down a conservation road but quickly lost it. Cadaver dogs subsequently turned up nothing.

One witness said, a couple of days later, that he thought he had seen Drew walking on Taconic Road, but that lead did not turn up anything. State police in Massachusetts and New York were also notified, along with local departments in Sheffield and Great Barrington.

Surprisingly, police did not search Pamela’s car, nor Drew’s own vehicle. A search of the trunk of Pamela’s car took place about a year later, “But we don’t even know if it was the same car or not that she had that day,” Allison Drew said.

This was one of several mistakes the state police made, Allison said, along with embracing the stereotype of an old man with dementia who simply “wandered away.”

“There has to be much more attention to avoiding stereotypes of any sort, whether it’s about mental conditions or race or anything, religion or age, and to develop investigative skills, because that was the thing that was missing,” Allison Drew said in a recent Skype interview. “They did not truly investigate; they took everything at face value.”

Drew subsequently hired an attorney to conduct an investigation. Matt and Pamela were deposed and gave sometimes conflicting testimony. Pamela initially cooperated with police, and said she would take a polygraph test but then changed her mind.

Foremost in Drew’s mind was determining what transpired in the 26 hours between when either she or Bettina had spoken with him and when Pamela first reported him missing to authorities.

Some have theorized that the very frail 125-pound Drew, who weighed about the same as a deer doe, was attacked by an animal, such as a large cat, and was dragged well away from the scene. Drew does not buy the “wandered-off” theory.

Drew said in our interview that she has two working hypotheses on what happened to her father that hot July evening more than 13 years ago:

1) “He was taken out on an outing by either a caregiver or one of their friends. Maybe they had other people there and he got lost elsewhere. He may have gotten out of the car and then got lost but we still would have found something.”

2) “I think the most likely scenario is that he died at the house and was removed due to panic. We don’t know exactly who was there because the caregiver may have had a friend or might have had someone replace them for that day. It became clear to me, later on, that sometimes that happened.”

Asked why she felt compelled to write the memoir, Drew cited several reasons. The additional publicity might cause someone to come forward. Or perhaps police will seek out phone records that they failed to collect in 2008, or reinterview the witness who came forward. And yes, she would like to bury her father:

“Yes, I would like some closure, I mean, my true closure would come from burying him as he wanted to be buried … but I also wanted to tell people what it is like to have a missing person in one’s life. There’s really very little on that in the public domain. I’ve only found one or two books really that talk about that, so I felt if I could discuss the impact that it had on me and that it would also be a contribution to understanding missing persons and those that they leave behind.”

I asked the Connecticut State Police what the status of the case is, if any new leads have turned up in the last few years and whether police have any working theories as to what happened to Mr. Drew.

Trooper Josue J. Dorelus of the Media Relations Unit would say only that, “This case is still under investigation and at the moment there are no further updates.”

Perhaps after reading Allison Drew’s memoir, the state police will feel compelled to issue a more complete response, for Drew went over the department’s investigation with a fine-toothed comb and found it lacking. Drew alleges that not only did police fail to follow up on key leads, especially in the early hours after her father’s disappearance, but that poor investigative work and forced confessions is a pattern in the Connecticut State Police.

Among others, she pointed to the 1973 Barbara Gibbons murder case in Falls Village. Click here to learn more. That case included a forced confession of a teenager to his mother’s murder through what could best be described as brainwashing and, later, conviction through prosecutorial misconduct. Gibbons’ son Peter Reilly was initially convicted of manslaughter and spent several months in jail before new evidence surfaced that led to his exoneration.