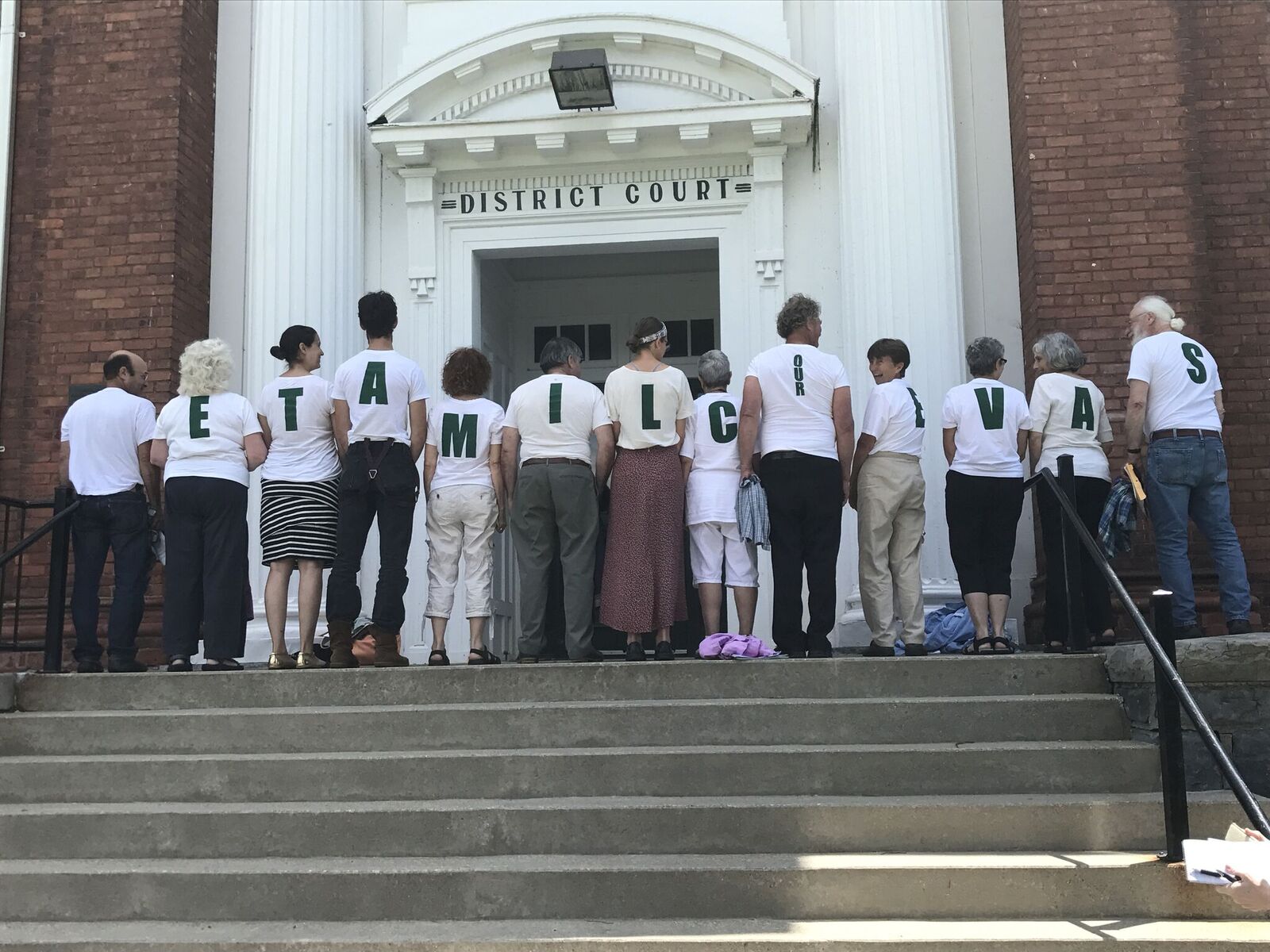 On the steps of the Southern Berkshire District Court, members of the Sugar Shack Alliance spell 'Save Our Climate' to make their point against fossil-fuel infrastructure. Photo: Terry Cowgill

Great Barrington — A hearing Tuesday for two dozen natural gas pipeline protesters arrested last month in the Otis State Forest was continued in order to give the court and the protesters’ attorney time to sort out the state’s legal definition of trespassing.

Southern Berkshire District Court Judge Paul Vrabel argued for almost an hour with Pittsfield attorney Joseph Zlatnik, who represents the protesters, most of whom are from the activist group Sugar Shack Alliance. On two separate occasions, the protesters refused to leave the site of the Tennessee Gas Company’s Connecticut Expansion Project in Sandisfield, where workers were clearing trees and performing site preparation for the project.

Sugar Shack is trying to stop ongoing operations to clear almost 30 acres of publicly owned forest to make room for a controversial natural gas pipeline expansion to Connecticut that many of its detractors insist is unnecessary.

Eighteen arrests were made in two separate incidents on May 2 with six more arrested Saturday afternoon, May 6. At a hearing on May 11, Vrabel entertained a motion from prosecutors to convert charges of trespassing and disorderly conduct from criminal to civil and ordered the protesters to return for a civil responsibility hearing.

At the Tuesday morning hearing, Vrabel cited a state statute on trespassing that defines a trespasser, in part, as one who “without right enters or remains in or upon [a] dwelling house, buildings, boats or improved or enclosed land.”

Since the activists did not enter a building, boat or vehicle, the state must prove that the protesters entered “improved or enclosed land.” But the land and the easements used by Tennessee Gas Pipeline lack fencing or similarly identifiable boundaries and, aside from being partially cleared of trees, could hardly be described as “improved.”

“Unimproved land connotes land that is wild,” Zlatnik said. “I would suggest this was the very definition of unimproved land. They were trying to prevent the land from being improved.”

“What is improved or enclosed land?” Vrabel asked. “Is the land enclosed by a fence? … A fence is an implicit statement.”

And so it went. Outside a courtroom the argument would be little more than academic. But inside a courtroom, it could mean the difference between a $100 fine and dismissal.

“The legislature puts language into the statutes and the courts often have to decide what it means,” Vrabel noted. “If [defendants] don’t satisfy the statute, they’re not responsible.”

Vrabel and Zlatnik held forth on abstruse legal definitions, but not before a string of protesters made statements and were examined by Zlatnik and occasionally cross-examined by Berkshire County Assistant District Attorney Caitlin Shugrue.

Two state troopers who were on the scene and participated in the arrests testified as to the whereabouts, demeanor and compliance of the protesters, whom they described as nonviolent and respectful.

“We gave them two warnings,” said Lt. James Dalton of the Massachusetts State Police. “They were acting peacefully.” He did, however, add that some were too close to the massive tree-cutting machines, which he considered to be dangerous.

Amy Pulley, 61, of Cummington was one of several protesters who, along with Zlatnik, invoked the state constitution, which says “the people shall have a right to clean air and water … and the natural scenic, historic, and esthetic qualities of their environment,” with the fulfillment of these rights to be carried out through state parkland acquisition and conservation.

“I did not believe I was breaking the law,” Pulley insisted. “Article 97 protects public land in perpetuity.”

Vrabel politely reminded them that district court was not the proper venue for arguing the constitutionality of the action of state officials and private companies.

But expanding the existing pipeline corridor in the Otis State Forest requires clearing of dozens of acres of forest now owned by the state, which purchased it for conservation and put it into protection under the Department of Conservation Resources and the state constitution.

After the company sued to continue, Berkshire Superior Court Judge John Agostini ruled in favor of Kinder Morgan subsidiary Tennessee Natural Gas, basing his opinion on the Supremacy Clause of the United States Constitution, which gives federal laws such as the 1938 Natural Gas Act precedence over state laws when conflicts occur.

Then, earlier this month, after FERC issued its Notice to Proceed, it was off the races. In response, Rep. Richard Neal and Sen. Elizabeth Warren demanded FERC revoke the notice, but to little, if any, effect.

Frustrated with the lack of clarity on the matter of trespassing, Vrabel instructed Zlatnik, who is working pro bono for Sugar Shack, to research the issue and write a letter to him with the definitions of “improved or enclosed” and fax it to him by 4 p.m. The hearing on the civil charges will continue on July 18.

Meanwhile the protesters continue their work. After the adjournment they held a news conference outside. Several of them posed in a line wearing lettered T-shirts that spelled “Save Our Climate.” They had attempted to perform the same stunt in the courtroom and were admonished by Vrabel.

Reporters were informed that the Sugar Shack Alliance, which has constructed a “Thoreau Cabin Pipeline Barricade” on the abutting property of Sue Baxter, will stage a Celebration of Resistance to Fossil Fuels event at the Cold Spring Road site on Saturday at 10 a.m.

Interested persons should gather at Spectacle Pond and march in a “funeral procession” to view the pipeline construction. There will be a speaker and music in celebration of the resistance to the project and an optional potluck lunch gathering after the event.