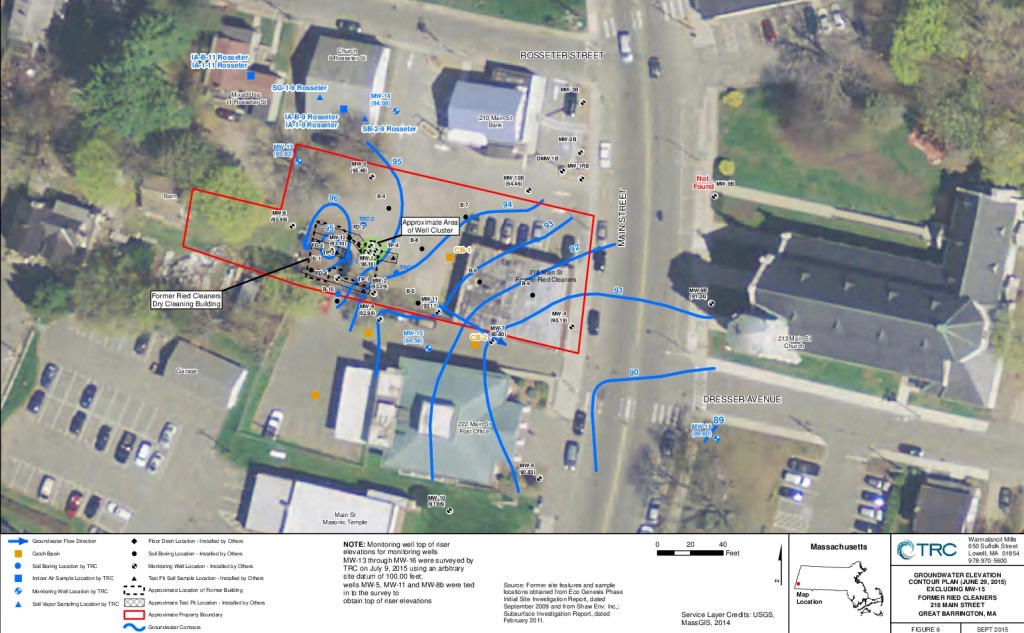 Great Barrington — A developer whose offer to buy a heavily polluted property was rejected last year says he won’t consider another stab at it.

Mill Renaissance LLC’s Jeffrey Cohen told The Edge that he would not try again to get involved with the former Ried Cleaners property on Main Street, so polluted it is now a slice of real estate kryptonite as attempts over the years to sell it to someone who would clean it up have failed.

Now the town is taking ownership over about $55,000 in unpaid taxes, and Town Manager Jennifer Tabakin said even the town doesn’t want to own it despite its golden Main Street location.

But Cohen says the town should deal with it no matter who eventually develops it since it will require the town’s capacities in both finding funding and shouldering liability for the legacy of dry cleaning chemicals that are still migrating across town in groundwater.

The pollution may be even more widespread than that, and that’s another reason Cohen says it needs oversight by an entity that can handle it.

Indeed, it was the town that secured a $91,000 grant from the MassDevelopment Brownfields Program for the initial environmental assessment at the site. And last January, both Tabakin and Town Planner Chris Rembold said there may be more from that program, and some extra funding through Berkshire Regional Planning Commission’s (BRPC) EPA-funded brownfield program for which $20,000 was granted for some of the assessment work.

A full cleanup is estimated at around $1.6 million, though there are ways to partially remediate for less, according to Rembold.

After 54 years in business, Ried’s closed in November of 2006, and since then has sat on the market for a decade, as about half a dozen interested buyers – including Cohen – wouldn’t make offers that would be enough to help the Ried family pay back the town and the state for an initial cleanup. The asking price took a nosedive from over $700,000 down to $169,000 after an initial inspection revealed catastrophic contamination.

Cohen said one reason he won’t try again is that he’s on the board of the Community Development Corporation of South Berkshire (CDC), an organization that “would be the most appropriate entity” to take on Ried’s. And he says the town needs to “be an active player” no matter who it selects to develop it.

Only the state can bless things in the way Cohen suggests, given the alarming MassDEP report that indicated the pollution still heads downhill from the site, southeast towards the Housatonic River and may have already reached it. Even worse, the chemicals may have reached bedrock, which would make them travel faster according to the report. But no one knows for sure because the money to dig deeper ran out.

But there may be a way forward that doesn’t sink any financial ships. According to the Attorney General’s office, the state’s Brownfield Covenant Program, through the Brownfields Act of 1998, may help a potential buyer get “significant liability relief and financial incentives” to redevelop the site. The office works with other agencies involved in brownfield cleanups and will work with prospective purchasers of contaminated properties and, in some instances, will enter into a Brownfields Covenant Not to Sue Agreement.

According to the agreement, “In exchange for a commitment to clean up a site and to undertake a project that contributes to the economic or physical revitalization of the community, we can provide individually-tailored liability relief to property owners and developers at the most difficult sites.”

When Cohen made his $100,000 offer on Ried’s last year, it was “contingent on a satisfactory plan and funding.” He says it may be “easier for a nonprofit and maybe easier for a town to remediate it,” given such undefined contamination and associated cleanup costs.

Last January Tabakin said the issue may force some decision-making about the role of the town and private property owners for the sake of economic development and environmental clean up. “We have to hold the responsible parties’ feet to the fire but also be practical,” she said. “We want it cleaned up and on the tax rolls.”

“The town can get money and take on liability then, once cleaned, select a developer,” Cohen said. “The town will have to take the lead.”