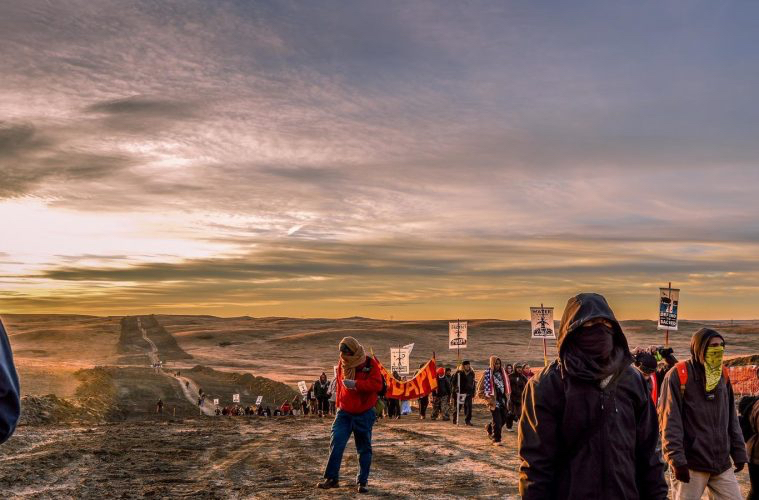 Great Barrington — It quickly went from cooking a Thanksgiving dinner for 500, to cooking it for 2,500.

A Berkshire’s crew headed into Standing Rock Indian Reservation amid last week’s rising turmoil and violence over the construction of an oil pipeline, at a moment when the population of the opposition camp had swelled in just one day.

“The camp grew by 2,000 between yesterday and today,” said Jeremy Stanton, who with his Fire Roasted catering crew drove with their equipment to North Dakota, where Native American tribes led by the Standing Rock Sioux have encamped for the long haul until the pipeline project is stopped.

It was a week when law enforcement grew more entrenched, deploying rubber bullets and tear gas against demonstrators, known as “water protectors.” It was the same week 21-year-old Williams College graduate Sophia Wilansky was gravely injured after demonstrators and other groups say a concussion grenade was lobbed at them. The Morton County Sherriff’s Office denies this account, according to a statement made to the Boston Globe.

As Stanton was on his way home Friday (November 25), The Army Corps of Engineers sent a letter to the chairman of the Standing Rock Sioux tribe that said all lands north of the Cannonball River will be closed on Dec. 5, the Associated Press reported.

The land to be closed includes the Oceti Sakowin camp, a sprawling encampment on Army Corps land about 50 miles south of Bismarck. For months, opponents of the four-state, $3.8 billion pipeline have been camping in the area to protest the pipeline.

The Standing Rock and Cheyenne River Sioux tribes are fighting the project because they fear it will harm drinking water and cultural sites. Pipeline developer Energy Transfer Partners disputes that and says the 1,200-mile pipeline through the Dakotas, Iowa and Illinois will be safe.

While driving through the reservation on his way home, Stanton told The Edge that, indeed, he saw evidence the pipeline company had upped its game to protect this segment of its $3.8 billion Dakota Access Pipeline project.

“There was a real presence of an aggressive force on the side of the hired security firms and the sheriff’s department,” Stanton said.

Stanton’s phone connection cut out from time to time as he spoke while driving through the reservation. He said the dinner had been moved from the Oceti Sakowin camp and its makeshift kitchens to the Standing Rock Community High School to accommodate between 2,500 and 2.700 people. Stanton said he and his team “managed the food service,” while teachers opened up the gym lockers and provided shampoo and soap so people who wanted one could have a hot shower.

Stanton said “loaded” buses went back and forth between the camp and school.

“An army of volunteers really rallied and made it a great success,” he added, noting that he and his team spent Friday morning delivering leftovers to the fire-keepers, guards, medical, legal and media tents.

“They were extremely grateful,” he said. “They weren’t comfortable leaving the camp to come to dinner at school.”

And then Stanton described the mood of the camp, and the water protectors as peaceful but determined in “non-violent resistance.”

“People are clear that they are at the camp in prayer,” he said. “It is a sacred space — the feeling you get is somber, a real sense of purpose, some joy and laughter.”

Earlier this month President Obama said the Army Corps of Engineers might reroute the project. But the Associated Press reported last week that the chief executive of pipeline company Energy Transfer Partners said the company refused to reroute it.

Stanton explained that the tribes would stick this one out, however.

“They’ve moved [to camp] to take this stand — they consider it their home,” he said. “Everybody is moving in. They left their houses and are living there till the end.”