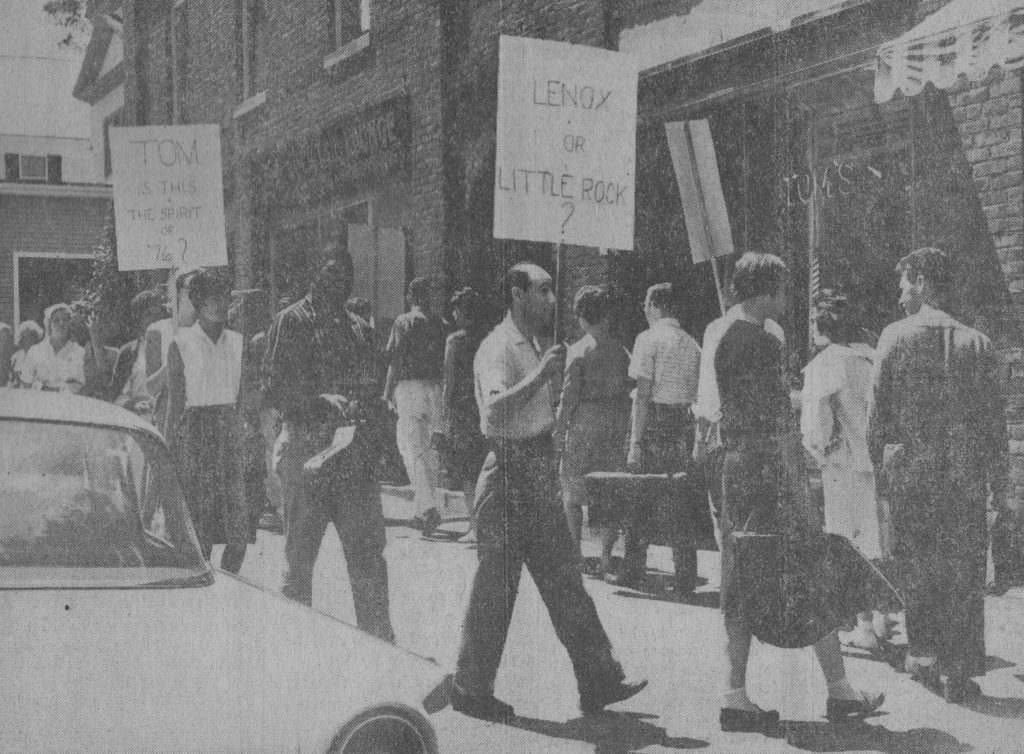 When Berkshire Music Center double bass player James Tranks (behind man holding 'Lenox or Little Rock' sign) was refused a haircut at Tom's Barbershop in Lenox in 1961, his fellow students brought their instruments to parade in protest outside the establishment. A photographer from The Berkshire Eagle was ready, and produced the above photograph. Tranks got his haircut.

Desegregating the Berkshires – 54 years ago

There is a tendency, here in Western Massachusetts, to think of the Berkshires as something special, as a refuge for progressive ideas and attitudes, a culture free of benighted attitudes, where diversity is cherished, where the very best of the human spirit and ingenuity can thrive and flourish, regardless of race or background. It is the place of Town Meetings and democracy, of plain speech and fairness, immortalized and idealized in the images of Norman Rockwell.

And it is, after all, the birthplace of civil rights leader and writer W.E.B. Du Bois; it is where former slave and abolitionist Mum Bett, in an act of extraordinary courage, brought slavery to an end in Massachusetts. It is the place where James Weldon Johnson wrote “Lift Every Voice and Sing,” the anthem of the National Association for the Advancement of Colored People. And it is the birthplace of astronaut Stephanie Diana Wilson, who became the second African American woman to fly in space.

At the same time, however, the Berkshires, enlightened as it may appear — and strive — to be, has not been entirely immune — at least in the past — to the challenges of racial prejudice.

Recently, we received correspondence from James Levinson, a resident of Marlboro, Vermont, and a research professor at Tufts University who has also taught at MIT and Boston University School of Public Health.

“I teach international nutrition and public health, and do lots of work in Asia and Africa,” he wrote to us, by way of introduction. “I’ve also served as spiritual leader of Jewish synagogues in central Mass. and in Brattleboro, Vermont.”

But in 1961, he was an undergraduate at Harvard University – and a double bass player. And that summer, he was accepted into the Berkshire Music Center Orchestra.

“I was thrilled,” he wrote. “In an orchestra of about 110 young people, a number from music conservatories, some playing with other orchestras, there were only about five of us who weren’t planning on being professional musicians – and the five of us had the best time. When we were being led by major conductors, we would have the principal players of the BSO standing behind us giving us pointers. I was intrigued. Most were petrified.”

Since then, he said, he’s had “great fun” with music, including graduate work in choral conducting at the New England Conservatory and “opportunities to conduct Bach’s ‘St. Matthew’s Passion’ and the Fauré ‘Requiem’ in Bangladesh and India.”

But it wasn’t only music that had made that summer at Tanglewood memorable. It was what happened to his roommate, James Tranks, an African American double bass player, and how, thanks to what was then a crusading newspaper, things changed for good in the Berkshires.

Levinson included in our correspondence a letter he had written to The Berkshire Eagle on July 10, 2011, 50 years after his stint at Tanglewood:

“Your readers may be interested to know that this summer marks the 50th anniversary of the desegregation of barbershops in the Berkshires, an effort initiated by Berkshire Music Center students and carried out with the active participation of the Massachusetts Committee Against Discrimination and The Berkshire Eagle. 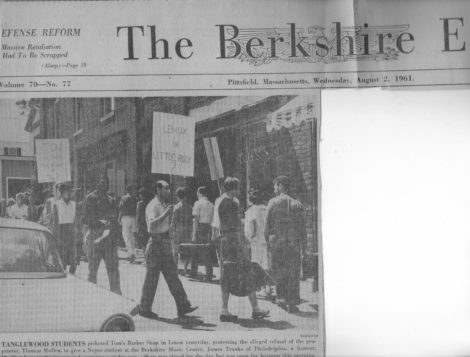 The top of the front page of the August 2, 1961 Berkshire Eagle, with photo of Lenox protest. Photo by Frank McCarthy.

“We discovered the problem in early summer of 1961 when my Tanglewood roommate James Tranks, an African American double bass player from Philadelphia walked into a barbershop in Great Barrington which immediately pulled down its blinds and told him the barbershop was closed. The same thing happened at a second barbershop in Great Barrington shortly thereafter and in Lee the following day. In Lenox, where haircuts at the time cost $1.25, the barber put up a sign saying, “Difficult haircuts $10.”

“Within weeks, as a result of legal notifications and news stories by The Berkshire Eagle, all of the barbershops had come around except for Tom’s Barbershop in Lenox. One of The Berkshire Eagle’s editors then phoned me to say, “If you get your Tanglewood students to parade in front of that barbershop with their instruments, we’ll take it from there.” Within a week, Jim Tranks got his haircut from Tom’s Barbershop…for $1.25.

“The story reminds us that such discrimination existed right here in New England at this late date. It also provides a classic case study of socially responsible journalism at its best.”

Ironically, Levinson reports, The Eagle failed do anything with his letter on the anniversary of the incidents he relates. We are making up for that omission. Better late than never.