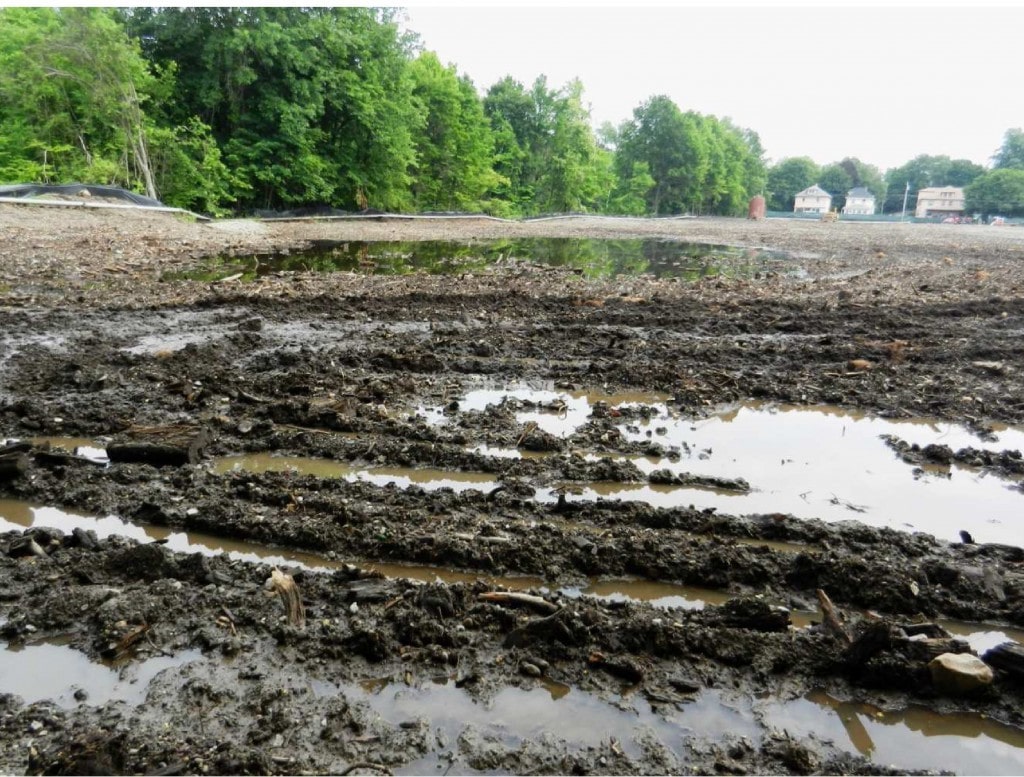 David Scribner
Last summer, record-setting rains impaired the bioremediation process at the former New England Log Homes parcel on Bridge Street that is foreseen as being the site of a commercial and residential development.

Great Barrington — A Monday (June 8) meeting between officials from the Massachusetts Department of Environmental Protection (MassDEP), the Community Development of South Berkshire (CDC) and town and state officials, yielded a plan for assessing the effectiveness of a pilot bioremediation cleanup of the former New England Log Homes site on Bridge Street in order to move development of the site forward.

Pignatelli said that he and Downing called the meeting after MassDEP officials contacted both legislators with concern over recent news reports that quoted Geller as saying that the bioremediation was moving forward, when, in fact, it had been stopped until the CDC could provide “empirical evidence” that the bioremediation is working.

A May 15 letter from Eva V. Tor, Deputy Regional Director of Waste Site Cleanup, to CDC’s Geller, informed him that the agency did not have enough evidence, based on the samples taken to date, that the bioremediation was successful, and put a halt to site work until more samples indicate a reduction of the dioxins and PCPs that pollute the site.

“I left [the meeting] feeling much more informed,” Pignatelli added. “It was a good dialogue, and the plan is now in the CDC’s lap.” 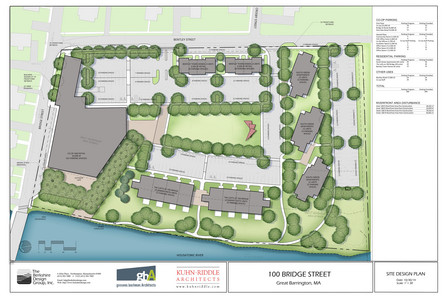 Plans for the 8-acre parcel include a new home for the Berkshire Co-op Market, residential and commercial development, and a park along the Housatonic River bank.

The CDC has for years attempted to remediate the site in order to develop it, and current plans are for 100 Bridge, a $40 million mixed use development that hopes to have an expanded Berkshire Co-op Market as an anchor tenant surrounded by retail, housing and open space along the restored eastern bank of the Housatonic River.

Heavy, record rainfall last summer created a cascading series of setbacks for the bioremediation work to continue at the site, and made it difficult to assess the results of the work that had already been done.

Pignatelli explained that because “the DEP doesn’t think this is working,” it was agreed at the meeting that the CDC would have Ransom Consulting, their Licensed Site Provider (LSP), create a Quality Assurance Program Plan (QAPP) in which Ransom and MassDEP’s scientists communicate to assess the results of the experimental bioremediation process. Based on an earlier interview with Biotech Restorations president Christopher Young, such a plan may involve 20 soil samples to determine whether there were any reductions in toxicity levels.

Young is co-creator of the formula and technique used in the bioremediation process.

“We all agreed that there needs to be more data to determine the extent that [the bioremediation] worked, where and how it worked, and to what threshold,” said Town Manager Tabakin. “We need to know to what extent we have to use the more traditional cap-and-cover method. We’re going to work as a team and will get testing done as soon as possible.”

“The DEP felt a qualified person could do a brief QAPP in two to three weeks,” Pignatelli said. “But not a long extensive thing; I don’t want to have Tim [Geller] spending more money and taking extra time.”

Pignatelli said that “we could hypothetically have an early July meeting, depending on how long the QAPP takes.” That way, Pignatelli added, “they can farm [the site] and do more testing. But the DEP isn’t satisfied right now.” 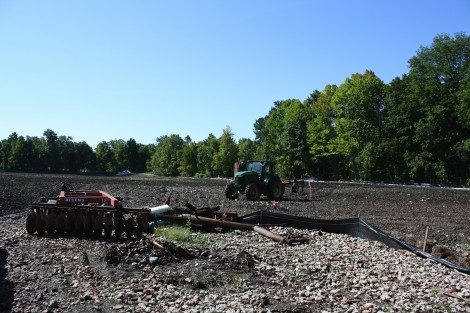 After the rains subsided last year, the tilling of the site resumed. Photo: Heather Bellow

Both Pignatelli and Tabakin said that MassDEP is keeping an open mind.

“The DEP doesn’t think this is working, but they are willing to gather more information,” Pignatelli said.

Tabakin said that MassDEP was “fantastic about providing extra expertise,” and that the meeting “showed a real commitment” on the part of “our reps and state agency to an important project in Great Barrington.”

An earlier report that the Environmental Protection Agency (EPA) has become involved in the cleanup issue was discounted on Monday (June 8) as a “rumor” by EPA spokesman Jim Murphy, who added that MassDEP “has kept us in the loop.”

“It’s a very educational process,” Tabakin said. “I think [DEP] took that approach to it — which is a secondary plus.”

Tabakin said it will soon be a question of whether to continue the pilot bioremediation, cap the site, or do a combination of both. State Rep. Pignatelli said that it would be “great” if the pilot cleanup worked. “If not, we move on to the next thing.”

“The meeting got everybody on the same page,” Tabakin added. “We want to make sure we have a site that can be developed. And there’s no doubt in anyone’s mind that it will be.”