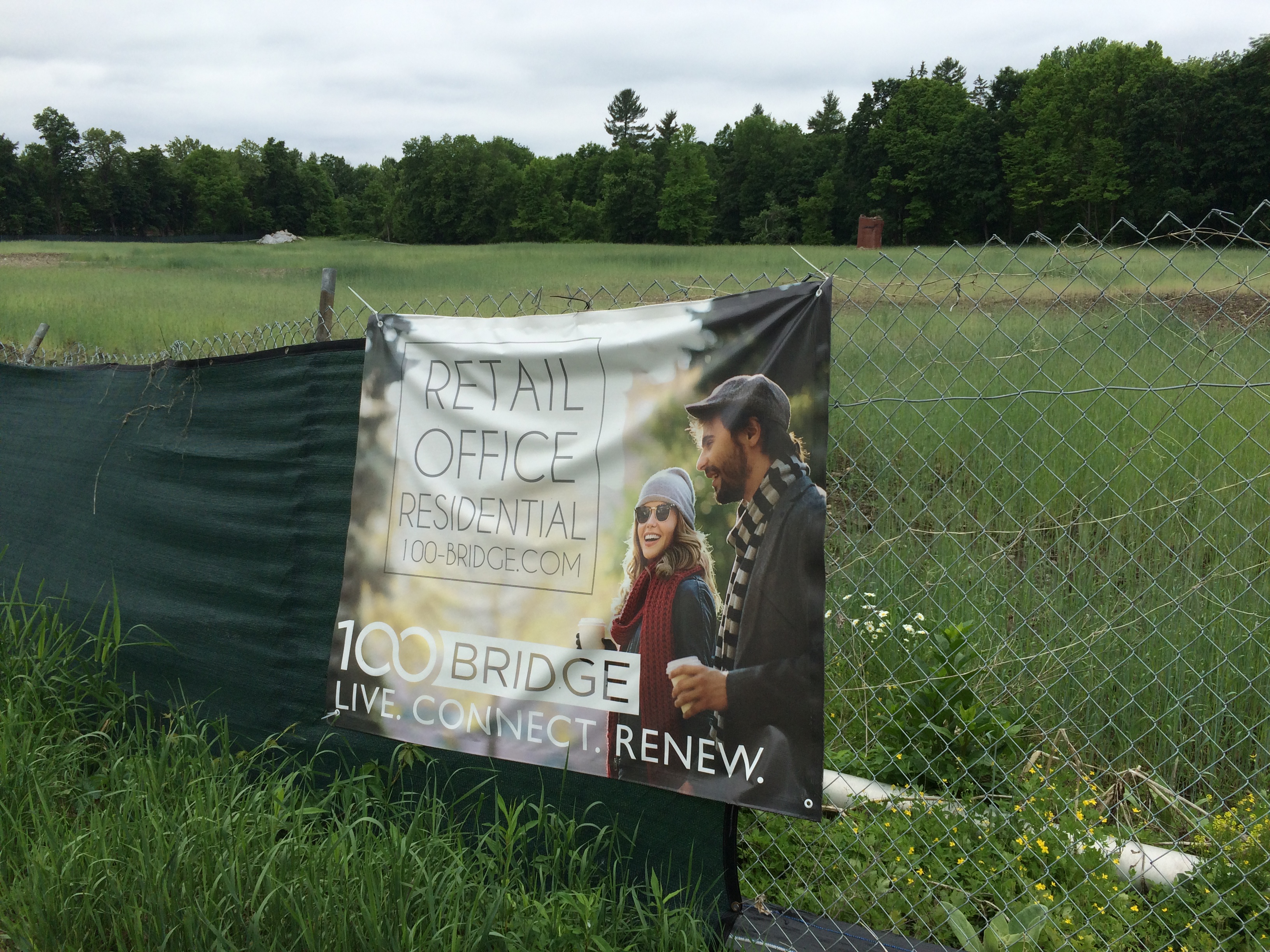 Great Barrington — After a downtown bioremediation test project was aborted last summer, and after more than a year of regulatory hassles over use of a new method to decontaminate the future site of a $40 million development, the Massachusetts Department of Environmental Protection (MassDEP) put the final kibosh on the work, saying that the agency was, instead, willing to discuss an alternative plan.

This spring, the DEP said it was halting the Community Development Corporation of Southern Berkshire’s (CDC) work on the site because it was uncertain whether the procedure, in its first real world test outside a lab, was actually working based on six samples taken at the end of last summer.

Now, in her August 18 letter to CDC Executive Director Timothy Geller, Eva Tor, Regional Director at Bureau of Waste Site Cleanup, said the agency “hereby terminates” the project for a number of reasons, the most important of which was the DEP’s conclusion that the bioremediation process had not actually neutralized dioxin concentrations.

“There is no documented scientific evidence found, nor are sufficient measures proposed, that will conclude that any reduction in dioxin concentrations can be attributed to bioremediation,” Tor wrote, adding that any reductions found in concentrations appear to the agency to be a result of moving around and working the soil into the site, polluted by industry for a century, and most notably by its last occupant, New England Log Homes, a kit company that used a wood preservative with polychlorinated phenols (PCPs) and dioxins, which are known carcinogens.

The CDC has tried for at least a decade to redevelop the 8-acre parcel, designated by the state as a brownfield, after obtaining ownership of the land that sits in a residential center of town, bordered by the Housatonic River on one side, the town’s sewer plant on another, and homes on the other two.

The second reason Tor gave for the permanent shutdown was “potential public health consequences” to nearby residents from the product applied to the site, which according to its creators, BioTech Restorations, helps the soil’s native bacteria destroy the chlorine-based and carcinogenic compounds. As a protein-based product, the Factor, BioTech calls it, has the potential to be an allergen or cause respiratory issues, and that “surrounding populations” developed such symptoms last summer.
Below is a video of the “Factor” being applied to the site:

During last summer’s windy-day application of the Factor, some of it landed like dirt on porches and cars. Some residents did complain of reactions to the dust, and odors that later developed when heavy rains flooded the site and created conditions that stopped the process, since the bacteria do not do their job in flooded soil. MassDEP halted the project as a result.

But MassDEP says that “capping” — or sealing off­­ –– the soil is the only way to ensure public health on the site, and that it was always the agency’s preferred solution — “The most cost-effective, feasible solution” — to prevent future exposure on the site.

The agency’s third reason for shutting down the project, possible exposure to extremely high dioxin levels, is the very reason Geller says the CDC wanted to try bioremediation in the first place.

“The DEP and the CDC are on absolutely the same side of this,” Geller said during an interview in the CDC office on Bridge Street. “Public health and safety are the whole entire motivation for the CDC to have undertaken the bioremediation. Capping the site has always been an option. And the only reason we chose to pursue an innovative, creative alternative was that we thought it was to higher benefit for public health and safety, for the neighborhood, the town, future generations, better for the earth. That’s the only reason we pursued that.”

Biotech President Christopher Young has, in the past, stated that Biotech successfully used the process to significantly reduce pesticides and PCB (Polychlorinated Biphenols) levels at a number of sites. 100 Bridge was a first attempt at PCP reductions in the open, and Young said his process had worked well in the lab. The North Carolina-based company says it has over $750 million in the development pipeline.

“If at the end of the day capping is the solution that provides the greatest public benefit, absolutely that’s what we will do,” Geller added.

Tor suggested that Geller contact John Ziegler, MassDEP’s Site Management Section Chief, about capping options for what the agency estimates is about 30,000 tons of soil.

But Tor hinted at some trouble because of around 300 tons of compost added to it as part of the bioremediation, and that may “complicate capping and potentially building efforts.”

“We don’t really know the answer to that yet,” Geller said of the soil issue. “One of the most confusing aspects of this has been that there hasn’t been an opportunity for our scientists to sit down with the DEP and the EPA, so any future solution clearly needs to be vetted out.”

The development known as 100 Bridge is envisioned with an anchor retail store, other retail and offices, open space, and a piazza-like gathering area in addition to affordable and market-rate housing units. An expanded Berkshire Co-op Market has been the prime candidate for the anchor slot, and has discussed the possibility with the CDC for several years.

“From our perspective, and from a long-term downtown development perspective, it’s absolutely the right place for [the Co-op],” Geller said. “We have always envisioned them as the core the public heart of a gathering place for South County, and that their mission aligns so beautifully with our own.”

Co-op Board of Directors President Dan Seitz says that 100 Bridge is “an attractive option.” But because of “a number of roadblocks” at the site, Seitz says the natural foods and lifestyle hub is “still staying flexible with its options.”

“We’re taking a step back and looking broadly,” Seitz added. “We have realtors who are keeping an eye on things.”

Geller says that the building schedule is tied to each separate aspect of the project. With an anchor business in place, Geller said, “we can move ahead.”

Geller expects permits for the affordable housing units to be ready this fall, and he’s having conversations with a developer for the market-rate housing. The Department of Housing and Community Development and MassWorks, a state funding vehicle, requested site visits, expressing interest in the project.

The CDC was also awarded $500,000 in Community Preservation Act money for affordable housing and open space at the site.

“From a practical standpoint, and from a health and safety standpoint, if we cap rather than bioremediate, there is virtually no impact on development schedule,” Geller noted. “This project has an incredible benefit for the entire community and entire region. We desperately need affordable housing, and it’s easy to lose sight of fact that one of biggest benefits that we are remediating an 8-acre site in downtown Great Barrington.”

Geller says he won’t get back an initial payment to Biotech that was required to get the bioremediation project going. “Most of the contract was performance based,” Geller said. He noted that there was about a 10 percent loss of all the pre-development costs, most of which would have been there no matter what.

“This has not been a waste of money,” Geller said, “and regardless of the end result of the bioremediation process, we’ve moved the science ahead.” He said there would have to be more soil testing, regardless of the solution. If so, more information about chemical reductions will be forthcoming.

Geller isn’t giving up on a solution. He points to all the benefits of redeveloping the site, including infrastructure improvements to the streets surrounding it.

“The CDC is in this for the long haul, and is going to remediate the site, period,” he said, adding that he feels “confident” that for the town, 100 Bridge will be a “beautiful, spectacular asset.”

Biotech Restoration President of Operations Christopher Young could not be reached for comment.