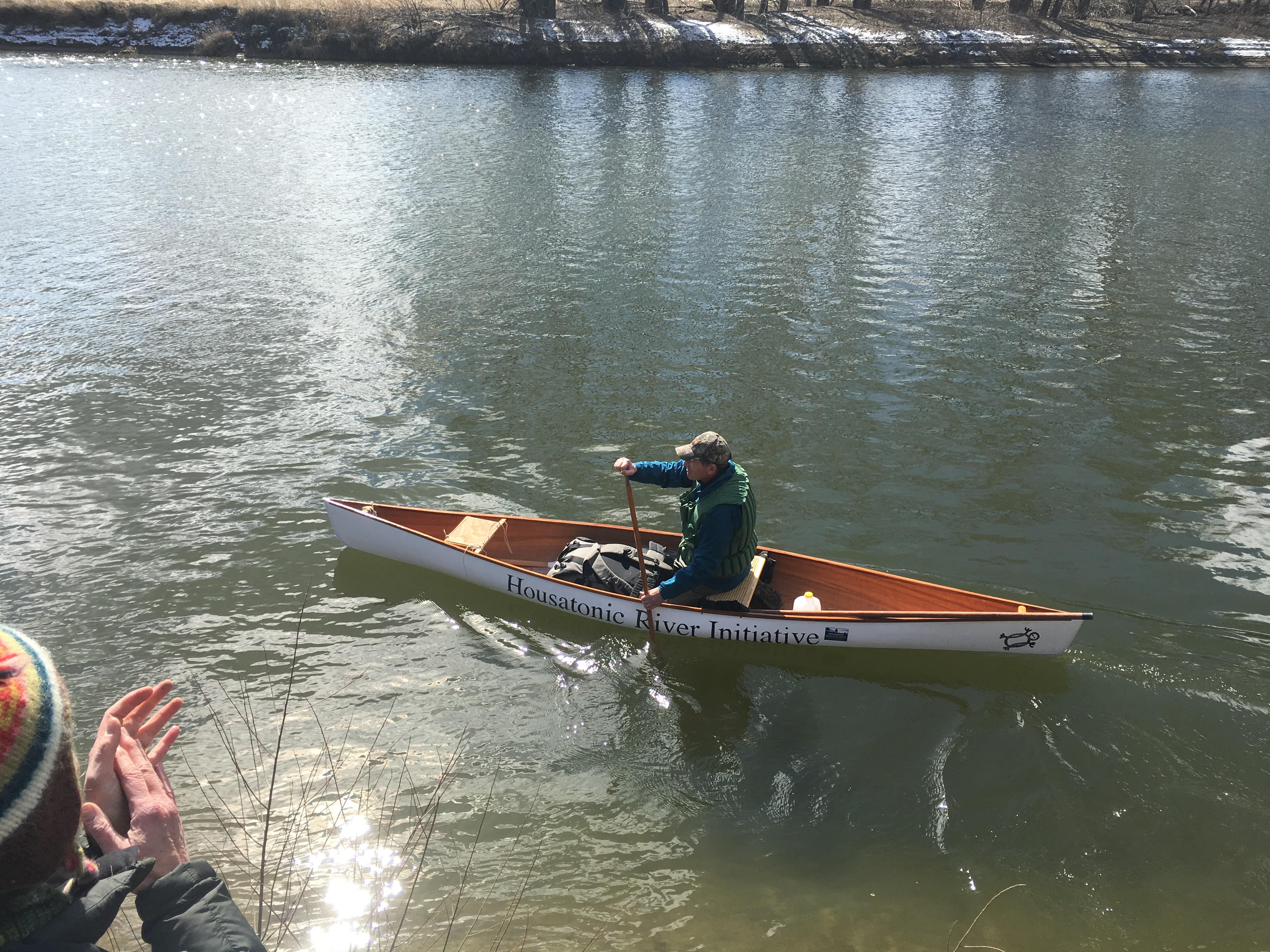 Sheffield – To the cheers of 40 well-wishers and the drumbeat of members of Berkshire Bateria, 69-year-old Denny Alsop of Stockbridge settled his white canoe into the Housatonic River at Bartholomew’s Cobble at 11 a.m. on Monday (March 21), embarking on a journey, first up the river, and then across the Commonwealth — by water where he can – a journey that will, in 30 days, bring him to the Statehouse in Boston where he will deliver a plea not only for the cleanup of the Housatonic River but for the restoration of waterways throughout Massachusetts.

Alsop calls his journey Canoe for Clean Water, and this is second time that he’s felt the need to call attention to the plight of the Housatonic River – and the condition of the state’s waterways and drinking water. His first trek was in 1988 – with the same white canoe he launched this week.

By 10 a.m. there was a lively gathering of environmentalists – among them, Judy Herkimer of Housatonic Environmental Action League, Inc. (HEAL), officials from the Trustees of the Reservations, Tim Gray of the Housatonic River Initiative, Berkshire Natural Resources Council – in front of the Trustees’ Bartholomew’s Cobble office on Weatogue Road. Alsop greeted his friends, who supplied him with last minute snacks – “serious” chocolate and venison jerky — for the laborious paddling upstream that he was about to undertake.

Among the supplies he is taking with him are two plastic water bottles in which students from the third grade at Muddy Brook Elementary School will insert messages to Gov. Charlie Baker, urging him to support a cleanup of the Housatonic River and to preserve the quality of water throughout the state.

“When I get to Taft Farms in Great Barrington on Thursday, I’m going to portage over to Muddy Brook and meet with students,” Alsop explained. “Then go up the Muddy Brook behind the school, and take back to the Housatonic.”

At last, it was time to begin the journey. Alsop loaded his canoe onto a two-wheeled carriage that he will take with him for the portages, and to the rhythm of Jim and Teri Weber’s Berkshire Bateria ensemble, he led the entourage around the Cobble and down to the river’s edge.

Standing on the banks of Housatonic before disembarking, Alsop recalled how when he left on his first cross-state clean water adventure, his 10-year-old son Ben had handed him a gallon of spring water to take with him that he would present to the governor. “If we don’t take care of our resources, the only clean water left will be water in this bottle,” he said. And he explained that his son couldn’t attend this send-off, but he had assigned the task of handing him a similar water bottle to 10-year-old Isaac Scribner of Great Barrington, “the next generation.”

Environmentalist Benno Friedman was among those who saluted Alsop.

“Denny is our courageous emissary,” Friedman declared. “He represents the best of civic engagement. It often begins with one person, to start a movement that can overcome the incredible power and money that is arrayed against a clean environment. This is the voice of the people and as he struggles to paddle up river, upstream against the current, against General Electric that opposes the cleanup of the rest of the river that Denny will be traversing, Denny is our metaphor.”

“This is going to be an adventure,” Alsop admitted. “Rachel Fletcher said that the river is something to open our hearts to. In a week, I’ll be at Fred Garner Park in Pittsfield where we’ll have another celebration. At that point, I will have gone the length of the Rest of the River. And that celebration is to recognize that the river can be cleaned up, as it has in Pittsfield, where the river is now restored. We can clean the river thoroughly and restore it.”

And referring to the Environmental Protection Agency’s proposed remediation of the PCB contamination down river from Pittsfield, a remediation that General Electric is challenging, Alsop concluded: “And why now? This is probably our last best chance to get the river clean. And we can do it.”

And with that he placed the jug of spring water in his canoe, stashed his pack at his feet, and pushed off, to the cheers of those who were hoping that his vision of cleaner rivers and water everywhere would be fulfilled.