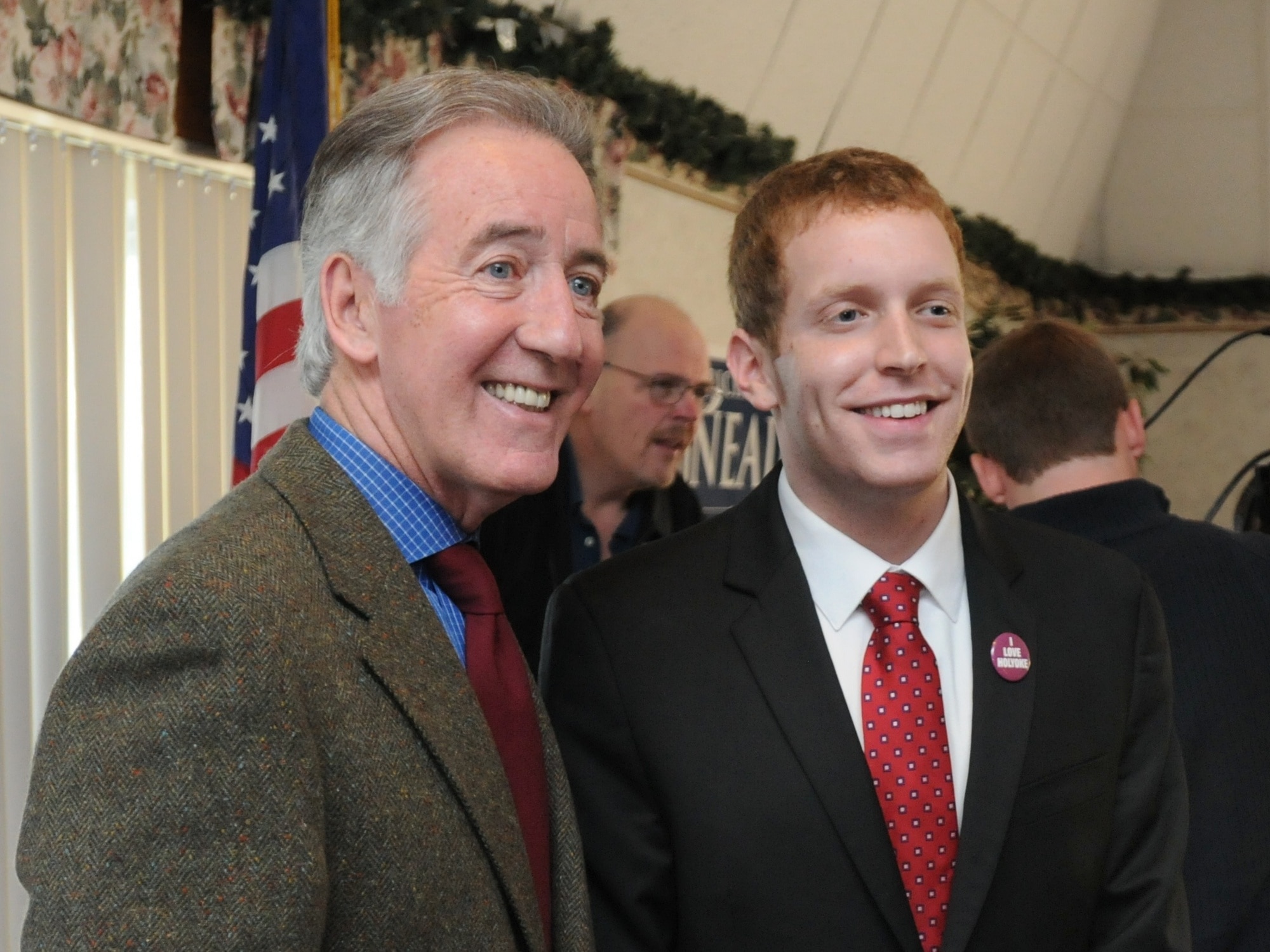 January 7, 2012 - Holyoke - Staff photo by Michael S. Gordon - Congressman Richard E. Neal, D-Mass, left, and Holyoke Mayor Alex B. Morse Saturday at the Holyoke Elks Lodge. Neal began his outreach in Holyoke to constituents of the reformed congressional district and voters he hopes to represent after the November election.

In the final days of an expensive and highly consequential democratic congressional primary, a vaguely worded letter alleging an abuse of power for sexual gain by Alex Morse, the gay 31-year-old mayor of Holyoke, almost ended his insurgent campaign. Now, it appears the allegations, as well as their release, were timed and orchestrated by a group of College Dems at UMass Amherst who support Morse’s opponent, U.S. Rep. Richard Neal.

On Thursday evening, the Intercept published two reports revealing that plans for the documentation and release of these accusations were in the works as far back as October. The idea started with Timothy Ennis, who was the president of the UMass College Dems in 2019. That semester he enrolled in a politics and journalism class taught by Neal. Neal was something of a political hero to Ennis and he became convinced that landing a job with the long-term congressman and powerful chairman of the House Ways and Means Committee was the surest way to chart an entry into a successful career in politics.

At a College Dems event in October, Morse socialized with students in a way that Ennis says he found creepy. Soon after, Ennis told other members of the College Dems that his goal was to re-elect Richard Neal. According to the Intercept, Morse had messaged another student, Andrew Abramson after a College Dems event, and Ennis encouraged Abramson to intentionally lead Morse on in the hopes that the mayor would say something incriminating. Screen shots published in the Intercept show that the mayor and Abramson engaged in small talk about what they had been doing that week, but said nothing about meeting each other. Abramson admitted that if the mayor were flirting with him, it was subtle. “Also, don’t mind me totally leading him on,” Abramson said. The College Dems also launched a small internal operation at the behest of Ennis to scan gay dating apps for the Mayor’s profile, and then have students intentionally match with him. Earlier this year Abramson become the president of the UMass College Dems chapter. The Intercept obtained screenshots from some of these online interactions, which, counter to the College Dem’s letter, do not appear to reveal “sexual or romantic advances” by Morse. Despite this, Ennis became convinced that by documenting Morse’s texts with students and screenshotting instances where Morse matched with them on dating apps, he had at his fingertips the type of dirt that could sink the mayor’s campaign.

By June, Ennis pitched a letter with anonymous allegations of sexual misconduct against the mayor to multiple news outlets, including Politico. The journalists Ennis contacted initially declined to print the story, as they could not find sources willing to corroborate the allegations on the record or provide them with specific details.

The letter was written on behalf of the entire Amherst chapter of the College Dems, but some people within the organization were unaware of its existence until last week. On Wednesday, the Massachusetts Daily Collegian, the student-run newspaper of UMass Amherst, ran the letter, in which the College Dems accuse Morse of abusing his office — using his position as a local mayor and teacher to pursue sexual relationships with students. The student organization has banned the mayor from all its further events, citing safety concerns for its members.

The letter also claims Morse mingled with students at College Dems functions and would later match with people he had met, messaging them on gay dating apps or Instagram, sometimes making students uncomfortable. Nobody has accused Morse of engaging in any nonconsensual sexual activity or that the students he shared relationships with were under his tutelage while he was a visiting teacher. UMass Amherst has launched an investigation into whether Morse violated school or federal policy during his time teaching from 2014 to 2019. Morse told The Edge that he is willing to fully cooperate with the investigation, but that nobody from the university has contacted him.

On a Zoom call with reporters Thursday, Morse said, “One thing I have been very clear about not apologizing for is being young, being single, for being openly gay, and for having consensual relationships with other adult men.”

Last week, the accusations prompted calls from two Holyoke city councilors for Morse to resign, and the Sunrise Movement retracted its endorsement of his campaign. But the campaign has held onto its other endorsements and reported raising $130,000 on Wednesday, its best day of fundraising yet. Following the Intercept’s reporting, Morse believes Neal played a role in the engineering of the accusations against him. Morse said that neither campaign has corresponded since the Intercept articles were published. Neal donated $1,000 to the College Dems, but his campaign has categorically denied having any involvement in the allegations. The Edge reached out to the Neal campaign for comment but has not received a reply in time for press.

On Friday, Morse told The Edge that, “Like many, I believe it’s highly suspicious that the story emerged three weeks before the primary election, as we are on the verge of defeating one of the most power democrats in Washington.” He said he trusts voters to come to their own conclusions about the allegations, but that he believes people are far more interested in his stances on the issues that impact them, not on his sex life.

Morse has served as the mayor of Holyoke since 2012. Stepping into office at the age of 22, he was the youngest openly gay mayor in America (Pete Buttigieg was not out at that time). Morse has fashioned himself as a progressive underdog, bankrolling his campaign with grassroots donations instead of super PAC money, and unapologetically supporting progressive bills like Medicare for All; the Green New Deal; and a transition to a 100% renewable energy economy through investments in solar, geothermal and regenerative agriculture. Morse also wants voters to focus on his record in Holyoke. The mayor can claim to have demilitarized his police force long before the protests in the wake of George Floyd’s murder and set up a needle exchange program in the city to help citizens struggling with opioid addiction. He also implemented a dual language program in Holyoke public schools, and school dropout rates have declined by over 20% in the last five years.

As the chairman of the House Ways and Means Committee, Neal, age 71, is one of the most powerful Democrats in the nation. He is distinctly more moderate than his opponent, and favors expanding the Affordable Care Act over Medicare for All, and prioritizes rejoining the Paris Climate Agreement. He is also the largest recipient of corporate PAC money of any congressperson. His committee is in charge of tax writing and proposing revenue schemes for some of the largest government programs like Social Security and Medicare. During his two years as chairman, Neal has focused health care, helping to expand unemployment insurance and benefits during the COVID-19 pandemic and pass H.R.3 (a bill that allows Medicare to negotiate lower drug prices).

Neal has made it clear that if he loses, the district will forfeit its power over the House Ways and Means Committee, and his chairmanship will be filled by the next highest-ranking Democrat in office. But Morse says that Neal’s tenure on the committee has done little for his constituency. Morse lambasted Neal for killing a bipartisan bill to end surprise medical billing last year. Families USA estimates that four in 10 Americans receive surprise medical bills, sometimes over $100,000 due to out-of-care network charges patients are unaware of. The bill, which was expected to pass, fell apart at the last minute, when Neal proposed another solution in the form of a one-page outline. Neal maintains he has prioritized the issue, but any further legislation is unlikely to pass during an election year.

Morse alleges that Neal killed the bill at the behest of Blackstone Group, a large private equity company that profits off of surprise medical billing and has lobbied for years to keep the practice legal. Last year Blackstone donated $48,600 to the Neal campaign, more than any other corporation.

With little high-quality polling, the state of the race is unclear. Neal has not seen tough primary challenge in years, but a new wave of liberal insurgent campaigns, from Rep. Alexandria Ocasio-Cortez, D-N.Y., to Jamaal Bowman, are a warning that no congressmen, no matter how powerful, are safe.

Neal and Morse will debate Monday, Aug. 17, at 7 p.m. The debate will be livestreamed on Channel 57 television, nepm.org and 88.5 FM radio. The primary election is Tuesday, Sept. 1.