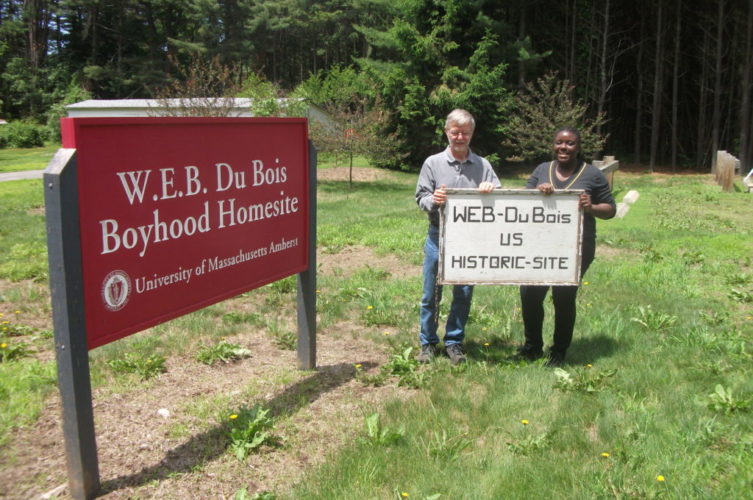 UMass anthropology professor Robert Paynter, who has led archaeological digs at the Du Bois/Burghardt site, and Felicia Jamison, a UMass doctoral candidate, in 2015 hold the original wooden sign that was installed at the Du Bois homesite. The sign is now in the archive at the Du Bois Library at UMass Amherst. Photo: Bernard A. Drew

Great Barrington — This Friday, Oct. 18, the town of Great Barrington and the UMass Amherst Libraries will mark an important event in the town’s history as they celebrate the 50th anniversary of the then-controversial dedication of the W.E.B. Du Bois homesite.

Du Bois, an African-American widely acknowledged as the preeminent intellectual leader of the civil rights movement, was born in Great Barrington and graduated from the former Searles High School on Bridge Street.

The original dedication on the same date in 1969 at the homesite at 612 South Egremont Road was fraught with controversy and tension. It had only been a little more than a year after the assassinations of Rev. Martin Luther King Jr. and Robert F. Kennedy. Those killings prompted a series of race riots and violent conflict that spilled over into 1969, as the bloody Vietnam War neared its peak.

The homesite dedication was deemed so controversial, in part because of Du Bois’ embrace of communism late in his life, that few town officials attended the event. Nevertheless, several prominent people were on hand and participated, including the keynote speaker, civil rights leader and Georgia state Sen. Julian Bond. The emcee was actor and activist Ossie Davis. This year, organizers say town manager Mark Pruhenski and selectboard member Ed Abrahams will be present, among other officials. Police Chief Bill Walsh has also been invited, said Randy Weinstein, director of the Du Bois Center at Great Barrington and chair of the town Du Bois Legacy Committee.

“When the [Du Bois Memorial] committee presented its plans for a park in 1969, the Great Barrington selectmen and local citizens threatened to stop the effort with numerous legal and political challenges,” according to a history of the event published in the Upper Housatonic Valley National Heritage Area African American Guide.

“Medical personnel and ambulances were on hand, as were local police equipped with riot gear shipped from Hartford, Connecticut. A State Police single-engine aircraft made passes overhead, and a unit of the National Guard stood by.”

See video below of the 1969 dedication of the Du Bois memorial in Great Barrington, courtesy W.E.B. Du Bois Library at UMass Amherst:

“Clearly, our community has evolved, grown and embraced Du Bois as a powerful figure in our nation’s civil rights struggle,” said Weinstein. “This event will mark not only a truly historic occasion, but a community’s evolution in embracing Du Bois’ dynamic contributions in scholarship, education and activism.”

To mark the anniversary, talks, readings, exhibitions, music and film will take place at the homesite and downtown at the Mason Library and the First Congregational Church.

At the homesite from 1 to 2:30 p.m., the celebration will commence with emcee and UMass Du Bois Center director Whitney Battle-Baptiste, along with speakers MCLA professor emeritus Frances Jones-Sneed and David Levering Lewis, Pulitzer Prize-winning Du Bois biographer and recipient of the first Great Barrington W.E.B. Du Bois Legacy Award. During the homesite portion of the event, parking will be available at the Great Barrington airport.

Between 3 and 4 p.m. at the Mason Library, guests can view an exhibit of original homesite artifacts gathered by UMass and the Du Bois Center. A film from the 1969 dedication will be shown.

Berkshire County NAACP President Dennis Powell will speak about his recent trip from Jamestown, Virginia, to Ghana, marking the 400-year anniversary of the beginning of the North American slave trade, followed by remarks from Rachel Moriarty, director of operations at the Schumacher Center for a New Economics.

From 5 to 7:30 p.m. events move to the First Congregational Church in Great Barrington, beginning with a reception from 5 to 5:30 p.m. The Passing and Sharing of the Du Bois Legacy Flame follows along with an intergenerational discussion panel led by Gwendolyn VanSant, CEO and founding director of Multicultural BRIDGE and vice chair of the Du Bois Legacy Committee.

Musical selections will feature Craig Harris, Wanda Houston and Guy Davis. Drum facilitation by Otha Day, together with Joanna Haigood, choreographer, is sponsored by Jacob’s Pillow Festival of Dance, and will complete the day’s celebration. The event is a collaboration between the town, the Du Bois Center and UMass.