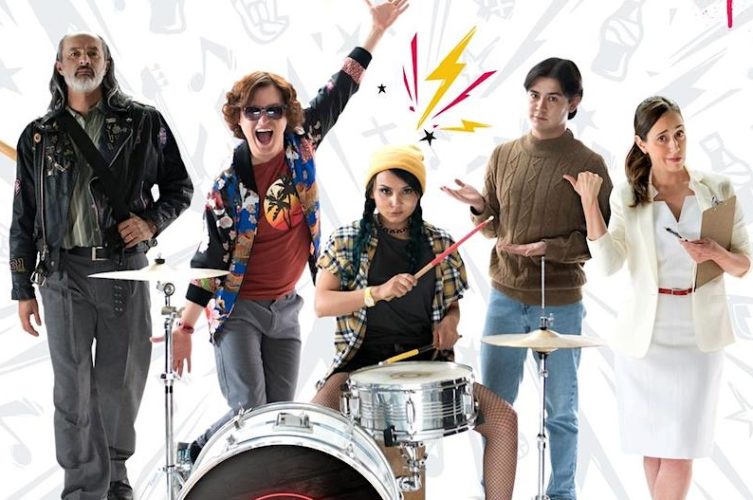 The Mahaiwe in Great Barrington will host a free screening of “Dedicada a mi ex” on Thursday, Oct. 21, followed by a talk-back with the movie's director and stars. Photo: Filmafinity

GREAT BARRINGTON — As saturated as the Berkshires is with arts organizations, an equally impressive number of barriers exist when it comes to making the region’s diverse fine and performing arts programming accessible to all. For the past three years, The Mahaiwe Performing Arts Center has partnered with Volunteers in Medicine Berkshires (VIM) in an effort to connect the Latin community with the Mahaiwe — and by extension, all arts organizations — in innovative ways.

This year, the nonprofits’ joint venture received funding from the Berkshire Taconic Community Foundation to form an advisory network to explore how to engage with the greater community. Their work to date will culminate in a screening of the film “Dedicada a mi ex” (With Love to my Ex) — a romantic comedy with English subtitles — on Thursday, Oct. 21 at The Mahaiwe; the 6 p.m. event is free and open to all.

“[Exploring] how to engage with community … and connect in ways that The Mahaiwe has not been able to do in the past [is the goal],” Melissa Canavan told The Edge, speaking on behalf of the 14-member Spanish-language Community Advisory Network (SCAN). The group, composed of individuals with an avid interest in the arts — whether artists themselves or simply fans — is working toward influencing a new level of programming, while identifying issues for all organizations to consider, with the goal of making genuine connections and building trust with the Latin community.

Enter Vladimir Soasti, who, in addition to being part of SCAN, seeks to promote culture and art in the Berkshires. He and his brother Marco, who hail from Ecuador, have lived locally for 20 years and run Soasti Bros Productions. As filmmakers, they immediately jumped at the chance to help organize events so the Latin community — and the community in general — could benefit from the screening of films in Spanish. Their experience shooting movies in South America led to a serendipitous coincidence: the Soastis knew the director and several actors in “Dedicada a mi ex,” the Sony Pictures Production scheduled to screen at The Mahaiwe.

“Why don’t we invite them, and see if they want to come?” said Soasti of his proposal to augment the free screening with a talk-back featuring the cast and crew. Thrilled at the chance to visit the Berkshires, four South Americans enthusiastically accepted the invitation and will be arriving on Tuesday.

Producer, writer, and “Dedicada a mi ex” director Jorge Ulloa has over 80 million followers on his YouTube channel. Joining him will be actor Carlos Alcántara, considered one of the top Peruvian comedians; actor Biassini Segura from Colombia; and Italian actress Erika Russo, who was part of “Enchufe.tv.” All four will participate in a Q&A session following the screening, and remain on hand for photographs and autographs.

“We have been working hard to organize events, as we want to show culture, art, movies — as many events as possible — in the future,” Soasti said.

Considering the prohibitive cost of concert tickets and museum admission, this “is not something that everyone can do — especially if they have a family,” Canavan said of the “financial strain” of some arts and culture events. Add to that barriers around transportation (widespread across the Berkshires), or arranging child care for an adults-only outing, and “all that cost really adds up.” There is also the current culture to consider: “Everyone is working really hard and not always [prioritizing] time to go see a show,” Canavan said of the inordinate responsibility placed on individuals working multiple jobs who do not always have the luxury to meet up with friends, have dinner, and see a show.

“Here’s an opportunity to provide an experience for anyone who has not felt welcome in these spaces — which they deserve to have — that they connect to,” Canavan said, citing lack of effort on the part of many organizations as another potential barrier. “It doesn’t feel good to be a second thought, and we need to be more intentional about making these groups feel prioritized,” she said, beyond one particular show or only when the house can’t otherwise be filled.

“Culturally, in the Latin community and for immigrants in general, the mindset is, ‘work, work, work,’” Soasti said, “and sometimes we forget about these wonderful events happening, or we don’t know what events are happening.” Soasti points to a strategy he’s begun employing to remedy this: having conversations, person-to-person, in an effort to spread the word.

Soasti recently had the opportunity to speak with the owner of a local construction company who, after learning of Thursday’s programming at the Mahaiwe, not only reserved 25 tickets for his workers, but also gave them the day off. “He wanted them to enjoy this opportunity with their families,” said Soasti, brimming with enthusiasm at the collective steps being taken to facilitate this programming.

The next step is thinking even further outside the box and for the long term, which, as evidenced by Soasti’s connections alone, demonstrate how salient connections exist and await being brought to fruition. “We really want it to last for many years to come,” said Canavan.

Admission to Thursday’s event is free and open to the public; advance reservations are required and can be made by calling the Mahaiwe box office at 413-528-0100, Wednesday and Thursday from 12–4 p.m., or emailing boxoffice@mahaiwe.org. All COVID protocols — proof of vaccination or a negative COVID test within 72 hours — will be required to attend (and this does include children). Masks will be required in the theater.