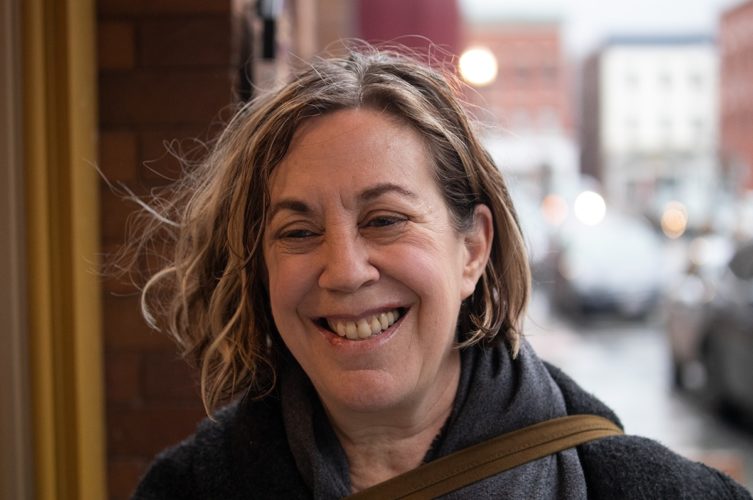 Great Barrington —“I fell in love with him when he died,” said author Beth Robbins of her husband, Steve “Sproutman” Meyerowitz, “and that continues to be a really hard thing,” she shared over coffee and conversation on a recent weekday morning. Robbins’ first book, “A Grief Sublime,” chronicles her multifaceted journey since learning of her husband’s sudden death in September 2015. In it, Robbins — a veteran English teacher and lover of Keats, Whitman, Melville and Dickinson — explores the trajectory of this trauma and how it intersects not only with the vicissitude of marriage and a life well-lived, but also the raw elements of being human. “I had to write after Steve died,” Robbins explained, and the encouragement to begin journaling became a veritable lifesaver for the author in navigating her grief. Robbins’ stark, slender volume is rife with literary allusions, stretching from Samuel Taylor Coleridge’s “Rime of the Ancient Mariner” to the opening lines of Melville’s “Moby Dick,” a work ostensibly penned right in Berkshire County where Robbins and her husband made their life together. Her story, told in no particular chronology, includes an earlier crash — a plane crash in which Steve, a budding pilot, experienced a midair collision while a passenger with the couple’s two young children — one that mirrors the car accident that took her husband’s life. In fact, by the end of the book, the reader learns a beautiful truth: “The space between these two crashes is a life–/twenty-one years.” The moments, tragic and shattering, become bookends for an incredibly moving story.

Robbins is adept at capturing the tension that exists between the known and the unknown; her writing is at once lyrical and raw. As a former English teacher myself, I enjoyed the bits of etymology and word origins interjected throughout as well as the return, on several occasions, to the power of myth and its role is shaping our understanding of the world around us.

Grief, we learn from Robbins, is messy. There are no maps to guide us, no direct way out of the confusion that threatens to engulf. Robbins ultimately finds healing through the knowledge that, in telling what she thought was Steve’s story, her own story came tumbling out; this becomes evidence that the two are inextricably linked. Perhaps most gripping, to me, is Robbins’ experience with what she calls “re/membering,” a concept that strikes me as unusually profound, simultaneously recalling and putting back together that which appears, if only to the outside observer, broken. At the center of her process and her writing is the pause — or standing place, as is the derivation of the word stanza — a space that frightens many. Robbins begs the question: How does one honor this wholly necessary pause? Her answer lies in the balance, simultaneously holding space for the grief and gratitude.

Hannah Van Sickle: Tell me about the book’s structure as well as the poets who permeate the pages.
Beth Robbins: The structure, to me, mirrors the experience of grief where everything is basically shattered; and everything in a certain way is of equal import, in terms of memory or poetry or the experience in the moment. I found myself bouncing around inside myself. In the writing, I tried to capture that experience of fragmentation. And that’s the liminal I’m obsessed with; I use that word a gazillion times. There are three different voices in the book: there’s the voice of me from the moment I find out Steve was killed in a car accident — that’s the chronology, and that’s a very fragmented writing style. It wasn’t that I deliberately set out to do that; it’s just the way it came. And it seemed to have a rhythm of its own, [one that was] significantly more lyrical and poetic than I thought it was going to be. The thing that really helped me enormously were these poets I had been obsessed with for decades, especially Keats, whose lines kept popping up. I refer to it in the book, from “Ode to a Nightingale”: “Though the dull brain perplexes and retards: Already with thee!” For me, those lines were really almost the theme of the whole book, because my experience of continued connection was only accessed when I stopped trying to reason what had happened. If I could be present in the moment . . . I was able to experience joy and gratitude. The voice of the poets is a different type of voice for me (my English teacher voice!) — anything scholarly or mystical. The third voice were these writer-memory voices: times in our relationship, things like that. I was very surprised as I revised that I needed to interject more of my own story. My intention was to write about Steve.

HVS: In a world teeming with individuals seeking external validation, you found an alternative path: “The journey to become the hero in my life/begins in despair and in a void.” Can you tell me a little bit about this realization and what it means to be the hero in your life ”whether you want to be or not”?
BR: I don’t have any absolute answer, but it’s this paradox of realizing that you are, at your core, alone and [at the same time] have everything you need to negotiate your own life. There was no answer outside of myself. No tarot card was going to show me the path to connection or energy work . . . they were all just sort of supportive things. I think being the hero of your own life is not a grandiose thing — like I’m walking around with a shield and a sword or riding my horse — it’s really just me stepping into who I am. It’s the raw, authentic human. I’ve always been very moved by Viktor Frankl’s “Man’s Search For Meaning.” His question was, what gives someone the ability to move through life when everything is taken away? That is why, in some of those myths I refer to, I get to [this question]: When everything is gone, where do you look? It’s like a panic attack: There’s nothing to grab onto outside of yourself, so you have to look inside yourself. That’s what I mean by “the hero’s journey”: Everything is taken away, but you also have helpers along the way.

HVS: Your intense vulnerability intersects with your study at Oxford; how did this become an auspicious moment in your grief journey?
BR: It was my final summer for my MA [at Middlebury’s Breadloaf School], which brings me to Oxford. This was the hope all along: that I would spend the final summer of this program at Oxford, and it would have been our 30th anniversary — Steve would have come, he would have seen me graduate. Steve dies in September, and in October I let Breadloaf know I would be returning and I wanted to go to Oxford. It was the weirdest thing: On the one hand, I was functioning so well — I went back to teaching three weeks after he died — and I’m profoundly despairing at the same time. But people didn’t know. That’s part of the loneliness of grief: People don’t know what to say so they don’t name it; they don’t bring it up because they think they are going to make it worse. The course I signed up for was my area of passionate interest: the 19th-century authors that I love, really the Romantics and the Transcendentalists, that era. [My sons] took me to the airport, and I was so bereft. Steve was my North Star — he was my home — in the most profound sense, and so I was truly lost. I was having such a profound experience with these poets and writers so I asked [my professor] if I could, rather than doing a more traditional, scholarly [project], I could do this research but write it in a way I felt compelled to write — which, I am realizing, with obvious differences, is the way I teach. To really have this personal experience, because literature is not just intellectual: It’s something profoundly transformative and real. So the first iteration of what became the book was much more scholarly [and began at Oxford]. My professor kept asking me to tell more of my story; I kept talking about how grief-stricken Keats was. She kept pushing me, in a positive way, to tell more of my story. I have always loved Keats, but Whitman, when I read his stuff, my whole body was electrified. It seemed that I had a very powerful piece of writing, and I knew I had to do more but I wasn’t ready to do more. There were just stories I couldn’t tell yet. Interestingly enough, I couldn’t write about Melville that summer. He struggled so much, he was so depressed; I couldn’t even go there.

HVS: You make a gorgeous pearl analogy in the last pages of your book. How has your grief journey contributed to your becoming?
BR: The name of the book answers [this question]. Sublime — which I define at some point in [the book] — sounds like an odd word to put with grief, but it has to do with sublimation: that metamorphosis of a substance into another — ice into vapor, for example — without first becoming water. It’s a cycle, so for me, it’s this idea of transformation into another form, but it’s not like you lose anything; it’s just this morphing into a different form. I was really struck by how an oyster makes a pearl: You have to go through this [process of agitation] and then you discover this amazing pearl. In a way, the pearl was always there because the potential was always there. It’s not like it’s a new thing. When I navigate [my grief] most successfully, it’s because I am able to access a feeling of gratitude, which is a real experience; it’s tangible. The gratitude for having had Steve in my life, for all those years, even the experience of the feelings — to realize the depth of despair, which I can access really easily — but I’m grateful for all of it, Which doesn’t mean I also don’t wish it didn’t happen. It’s just constant paradox: the pearl in the seeming waste.

A launch event for Robbins’ first book, “A Grief Sublime” (Keats & Company Publishers, November 2019) will be held Saturday, Dec. 7, from 4 to 6 p.m. at Shakespeare & Company’s Elayne P. Bernstein Theatre. In addition to selected readings from the book, Robbins will be joined by actress (and audiobook narrator) Karen Allen, Oscar-winning film director Cynthia Wade, actor James Warwick, and bestselling author/audiobook producer Alison Larkin (“The English American”) for an interactive panel discussion. The event is free and open to the public.

In addition to her writing life, Robbins has been an English and drama teacher at the Berkshire Waldorf High School for the last 15 years. Prior to that, she worked as an editor for SteinerBooks/Anthroposophic Press. In 2017, the Bread Loaf Journal published her personal essay “Fragments in Liminality: A Lover’s Discourse.” That essay became the foundation of her book.