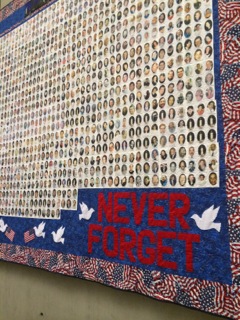 Everyone remembers where they were on September 11, 2001. How the sky was a beautiful shade of blue or just how perfect that late-summer day seemed. Some were actually there and bore witness to the horror in New York City while others witnessed the events on television or on radio. It was a day that fundamentally changed our nation (and the world) forever. Everyone remembers where they were that day except for those who were too young to remember.

I was three years old on September 11 and like most kids, I was in preschool that day. Most kids, including myself, don’t remember anything that happened that day. It was never discussed in school. We only spoke about if for annual moments of silence on that day which peaked my interest and made me wonder, “What was 9/11?”

On the 10-year anniversary it was finally spoken about and I learned about what truly happened on that terrible day.

These questions would be answered through copious numbers of documentaries and books but still I felt a disconnect between those who experienced the events and those who were my age and didn’t.

The opportunity recently arose for me to visit the 9/11 memorial and museum in New York. It was an absolutely touching tribute and incredible learning experience for an outsider who remembers nothing about the day that changed our history.

When I first arrived at the original site I was immediately struck by the stunning memorial pools. There are two of them, each where the towers once stood with the names of those who perished that day. The pools mimic the original size and scope of the towers and are incredible in size and scope. Television and pictures don’t do this justice; it’s an absolute marvel to look at.

As I walked along the pools I felt a strange connection overcome me. “History happened here,” I thought to myself.

Entering the museum, that connection grew even stronger. The museum is built on the original foundation of the World Trade Center and an absolute feeling of sadness overcame me. As you ride the escalator down into the lobby, two of the original tridents of the building stand. Looking at them and riding down into the abyss, a tear started to fall. It immediately struck me the scope of devastation and grief that people encountered the day. 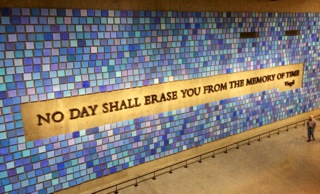 What was an absolute punch in the gut was in the main exhibition hall. A quote from the Roman poet, Virgil, lies on the wall, forged from steel remnants of the World Trade Center rubble that reads, “NO DAY SHALL ERASE YOU FROM THE MEMORY OF TIME,” accompanied by an art installation in different shades of blue called, “Trying to remember the color of the sky on that September morning”.

If you opt to download the 9/11 museum app for smartphones, Robert De Niro will guide you though the exhibits and tell you a brief history of each one as well as provide you with accounts from survivors and restoration workers.

On display is a vast number of items that capture that day and restoration efforts. You’ll see a staircase that survivors used as an escape route, as well as a crushed firetruck, and an antenna that once stood at the top of the North Tower.

Every single exhibit is a small piece from that day and beyond and absolutely encapsulates you in emotion. Seeing and touching the steel from the original buildings brings on immediately feelings of grief and closeness to the event.

And yet while you may feel grief throughout the museum, you can’t help but have hope. Each exhibit tells a story of loss, yes, but also of unity and strength. One of these objects on display is a lone piece of steel aptly called, the last column. It’s the last piece of steel removed from Ground Zero and captures the restorative qualities of the museum.

One exhibit, “In Memoriam,” is an entire room dedicated to those who perished that day. The room itself is covered from floor to celling in pictures of the victims of the attacks. Computer terminals inside allow you to search for those who died and to witness a brief overview about who they were.

Being in In Memoriam Hall shows off the sheer scope of loss that day. In that room, you can’t look any way without seeing the face of one of those who perished. As I looked around and processed everything I was seeing, it really struck me that this was real and all these people perished. It’s an absolutely touching, breathtaking tribute that made the loss to me, an outsider, so real.

Within the museum is an exhibition hall titled, September 11, 2001. It’s divided into three separate galleries, before 9/11, 9/11, and after 9/11. Really, this part could be a whole other museum; it’s so massive in scope.

The before-9/11 galleries talk about the construction of the buildings, of The Pentagon, and The World Trade Center and the history surrounding them. Newspapers from that day are on display painting a picture that this was going to be just another day.

While the before-9/11 galleries discuss the construction of the buildings and the plot leading up to 9/11, the after-9/11 gallery discusses the aftermath of the attacks both with our nation’s entrance into Afghanistan and Iraq, and with the security policies that were put in place.

Perhaps the most controversial section of the museum, before-9/11 talks about the history of al-Qaeda as well as the 9/11 plot. Everything discussed and on display is respectful and helps provide historical context to the event. In my opinion, there was not one moment where I felt as though the museum was being unfair to any ethnicities or religions. For example, the after-9/11 section discusses the impact the attacks had on the Muslim community.

The galleries encapsulate the historical elements of 9/11, featuring clips from the news when the story broke, voicemails describing the horrors, radio chatter from the New York Fire Department, as well as a plethora of pictures.

Some parts of the galleries are incredibly hard to see. A whole gallery section is dedicated to those who jumped from the buildings. There is another section featuring audio phone calls from the passengers on hijacked flight 93. These passengers knew what was going on and hearing the voicemails they left for their families is hard to listen to. It was so potent and touching that I left midway though the audio presentation.

The entire museum is not only overwhelming in terms of content, but emotionally, it’s draining. I felt as an outsider that seeing all the exhibits and then going to the history section was just too much to take in.

And I haven’t even touched upon the interactive elements of the museum, which allow you to record your memories of that day as well as leave personal messages to the families of those who perished.

But the whole time I felt a close connection to history. The mood was unlike any other museum I’ve been too. It is understandably quiet and somber. No one was stopping to take pictures in front of exhibits and there was a sense of observation and absorption.

As someone who is an outsider to 9/11, looking into the museum brought me closer both physically and emotionally to the event. Yes, there were times when I was overcome with sadness but also times of pride and patriotism. That throughout this terrible event we could as a nation rebuild and stand as one.

My feelings are best summed up by a quote from the audio guide. To quote from the Clara Neubauer, a child born on September 11 who narrates parts of the audio guide, “[What 9/11] reminds me of is not the terrible things that happened that day, but the love, kindness, and courage we’re all capable of, even in the worst situations.”