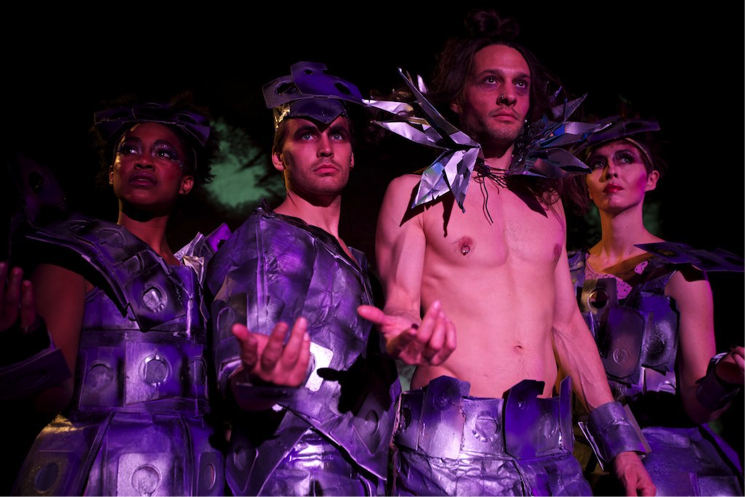 John Charles Meyer, second from right, as one of the Hands of Fate in Ken Roht's '99c Only Same-O.'

Daniel’s Art Party at Simon’s Rock: ‘Dave Made a Maze’

The sexy, shirtless dude is my friend John Charles Meyer. He lives and works in Los Angeles as an actor and a producer. A couple of years ago, it was great to turn on the television and happen to see him featured in a gorgeous Volvo commercial (check it out, it’s pretty special). When I met him almost 10 years ago, he had just come from a year on the road with a heavy metal band that he fronted and managed Strawman! This letting down of his, at the time, considerably long hair (to his waist!) came after working for a few Washington politicians that he truly believed in. In this picture, he is one of the “Hands of Fate” in “99c Only Same-O,” a spectacle that was an installment in my yearly surrealist pageants in Los Angeles.

My brief description of John Charles serves to outline his interesting multifaceted-ness. I’m always curious to know what John is up to, so when he told me that he produced a film, I was compelled to see it not just to support my friend, but because I knew that he wouldn’t work on a project that he didn’t 100 percent believe in. 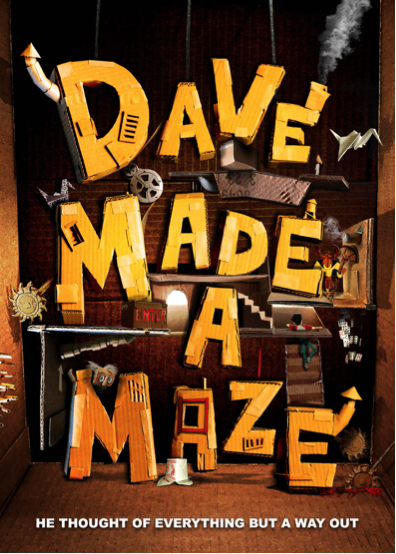 I went to a movie theater in Santa Monica, California and was transported to a very unique, magical word of unbridled creativity and humor. As a progressive whimsical-surrealist artist, one in love with sexy-funny, “Dave Made a Maze” checked so many of my boxes. This truly inventive film, about a guy and a lot of his friends getting trapped inside a cardboard castle that the guy built in his living room, was made on a shoe-string budget and that makes it all the more wonderful.

You must know that the pageants that I mentioned were co-sponsored by the 99c Only Store chain (akin to Dollar General here on the East Coast), and that genius designer Ann Closs-Farley led a team of artists to create incredible costumes out of plastic tablecloths, pool rafts, coffee filters, bath mats, etc., all held together with miles of clear tape and zip ties. The above picture of the “Hands of Fate” features vacuum cleaner bag couture. Ann and I worked on a dozen shows together until adult responsibilities took precedence over maverick, wildly ambitious art-making. 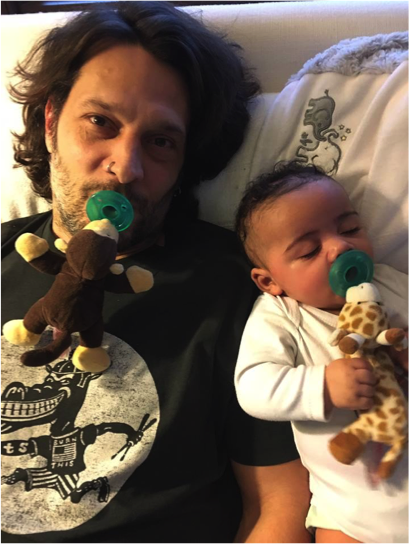 Now, as Daniel’s Art Party is defining itself as a progressive, multimedia arts program, I wanted to screen a film that I love from a producer that I love for my new, beloved arts community in the Berkshires. That the inspired do-it-yourself aesthetic of the film coincides with my past work in scrappy, collage musicals is icing on the cardboard cake.

John Charles has been shepherding the film to many festivals, including to Slamdance Festival, where the film received the Audience Award for Best Narrative Feature. Just now he got home from a screening in Norway, rejoining his incredible wife, Etienne, and their newly adopted son.

John Charles, now a husband and father, and I will engage in a post-screening Skype Q&A Tuesday, May 14, at the McConnell Theatre at Bard College at Simon’s Rock.