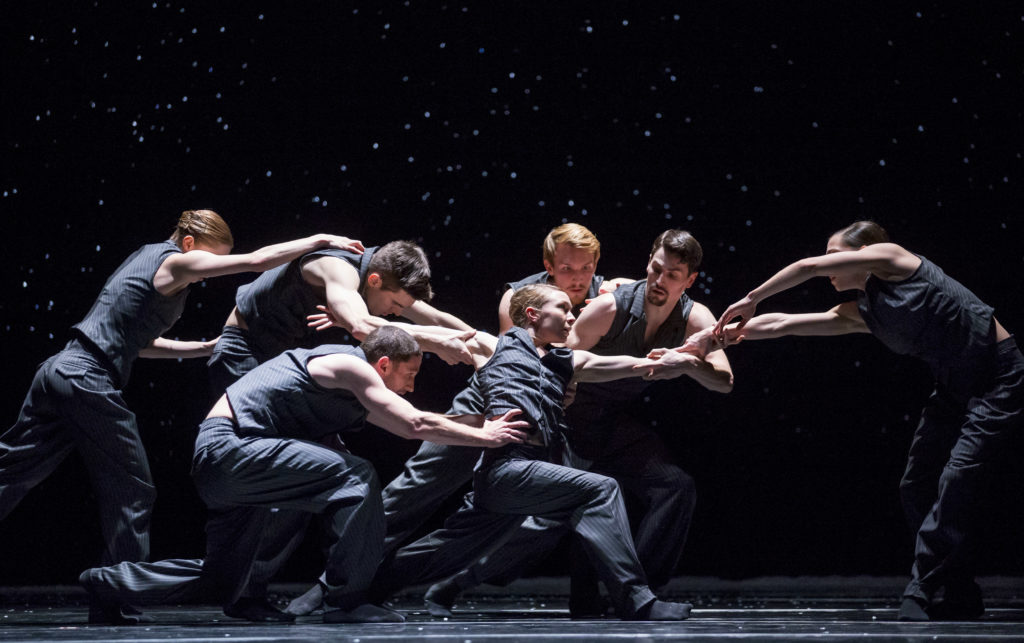 DANCING ON THE EDGE: Recent performances at Jacob’s Pillow

I had been enjoying this opportunity to share thoughts about and reactions to dance until I saw a performance that challenged me in an unexpected way.

I did not like the performance and found myself quite uneasy writing about it. I was uncomfortable reporting out my feelings. I was stymied. Slowly I realized what was going on: It was the Republican National Convention. What, you ask, does that have to do with an opinion piece about a dance? It took me a while to figure out. I became acutely and uncomfortably aware of how opinions are formed, expressed and heard. I started thinking about values, judgments, and standards conscious and unconscious that effect our reactions and resulting actions. I questioned the ways in which public expression of personal points of view land.

Given what is happening in the world at large, it is impossible for me not to see the impact of public statements, informed and uninformed, and it has had an extraordinary impact on me.

Passion and vitriol keeps much of current political public expression upright. Standing centered on a belief without respect for or consideration of other beliefs–indeed, vilifying others and their beliefs–is the choice here. It cautions me to contextualize rather then pontificate in all areas of my life. I suspect the way I express negativity will vary according to the subject matter that presents itself: some stuff hits at a gut level and is harder to discern the link between action and reaction; at other times, it is more obvious. I am now so much more aware of this.

In the past I was someone who was paid to have a strong opinions and act on them. My decisions did have an impact on artists and audiences. Some were well received and some were not. But I felt qualified to make them; I knew they were informed by history and current trends. I did often pontificate. As a civilian I am surprised but not unhappy about the discomfort I feel in expressing negative reactions publicly.

So now to my original piece about Hubbard Street 2: 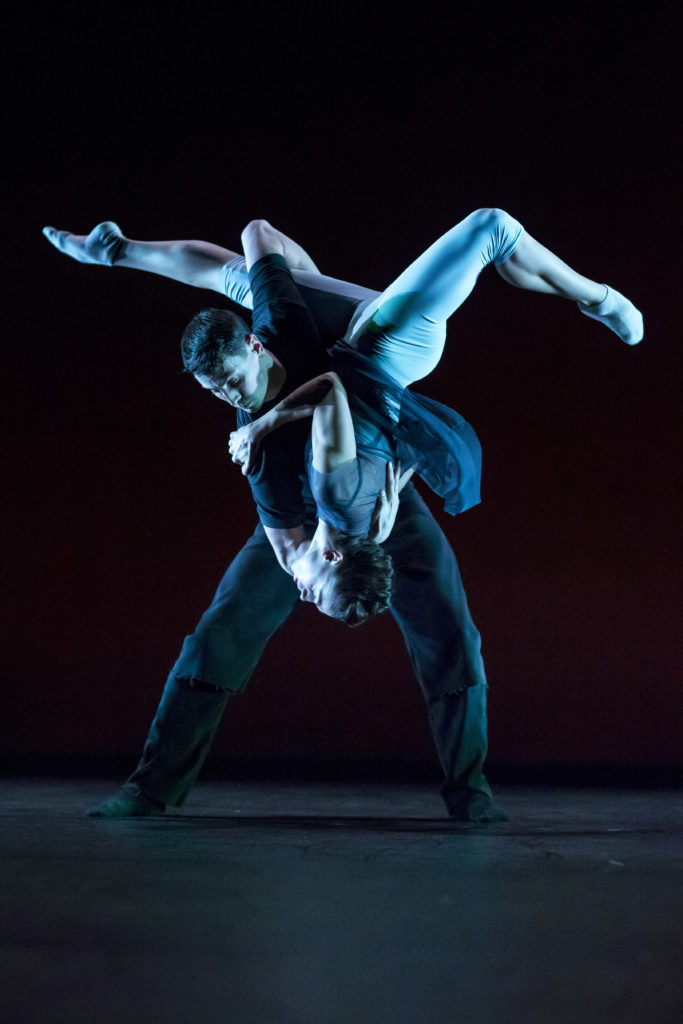 A friend of mine recently said that expectations just set you up for disappointment, and I am afraid that is what happened to me when I signed up to see Hubbard Street 2 and Manuel Cinema at Jacob’s Pillow in Becket.

The program portended a unique and gutsy collaboration. I was surprised as that was not my perception of what the company usually does. And I wished to be delighted. I entered the theatre expecting to be pleased. I was not. I expect some audiences liked it and others felt as I did.

When I first presented Hubbard Street at the Pillow in 1983, many were upset because it was “jazz” and not “modern dance” as expected, but they soon became a Pillow favorite. No one could deny the beautifully trained dancers with great personalities and warmed to Lou Conte’s style.

During “Mariko’s Magical Mix: A Dance Adventure,” I found myself challenged to still the chatter in my head. I enjoyed the individual personalities of the performers, but the event itself fell short of the artistry demonstrated by the individual dancers. By moving behind screens, the dancers appeared to us as shadow images. The magic of transformation from corporeal to shadow performer had its moments but soon lost its verve. If you see the effort to create an effect, in this case the shadow figures, then it is integral to the concept. But if the mechanics are revealed without intent when they are meant to be seamless, it looks sloppy and tarnishes the magic. It was opening night. Perhaps the transitions were smoother in later performances. Or perhaps I misjudged and the transitions were meant to be seen. At any rate, the intent needs clarification.

I found the narrative rambling with many repetitive images and not very compelling choreography. Perhaps a good bit of editing could have pulled the piece together and heightened its impact. I applaud the company for a brave attempt. I applaud the company for understanding how important it is to introduce children to the magic of the theater, which is why I am sorry to say I found the work sophomoric and pandering: It did not respect the intelligence of its young audience.

I wish I could be more enthusiastic about the performance exploring shadow puppetry and dance — a worthwhile experiment. 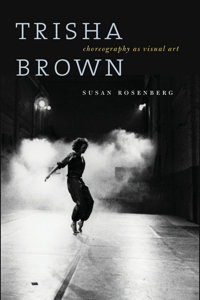 I attended a conversation between Zvi Gotheiner and Susan Rosenberg. Susan is one of the foremost, if not the foremost, experts on Trisha Brown and I am profoundly grateful to her for new book. Trisha is a great artist and a personal friend. Just graduated from Mills College, her first teaching gig was at Reed College where I was a sophomore. Later I was one of the dancers she used in her composition classes with Louis Horst at Connecticut College. We babysat for each other, allowing each of us time to dance, and shared many personal pleasurable and painful moments in life. I cannot tell you how difficult it is to accept her fate and ours, as her great mind and body can no longer function in a healthy manner.

I am grateful to the Pillow for arranging this dialogue. It was a pleasure to hear Susan Rosenberg’s keen description of Trisha’s work and its power, originality and influence. It was gratifying to hear Zvi Gotheiner and a conversation, which illuminated each artist’s unique connection to visual art. 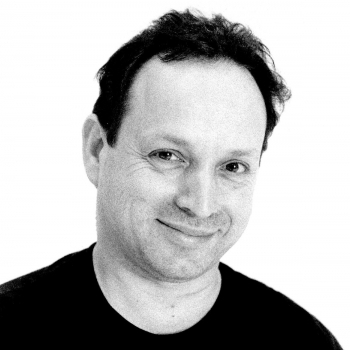 I later saw Zvi Gotheiner’s own company articulate his premise clearly. Titled “Escher/Bacon/Rothko,” each section used space in a manner that clearly conveyed the visual artist’s aesthetic. Each section physically conveyed the tone, physiology, emotion and intellect of the artists through a fresh, probing exploration of movement. I look forward to following the career of this very gifted choreographer. 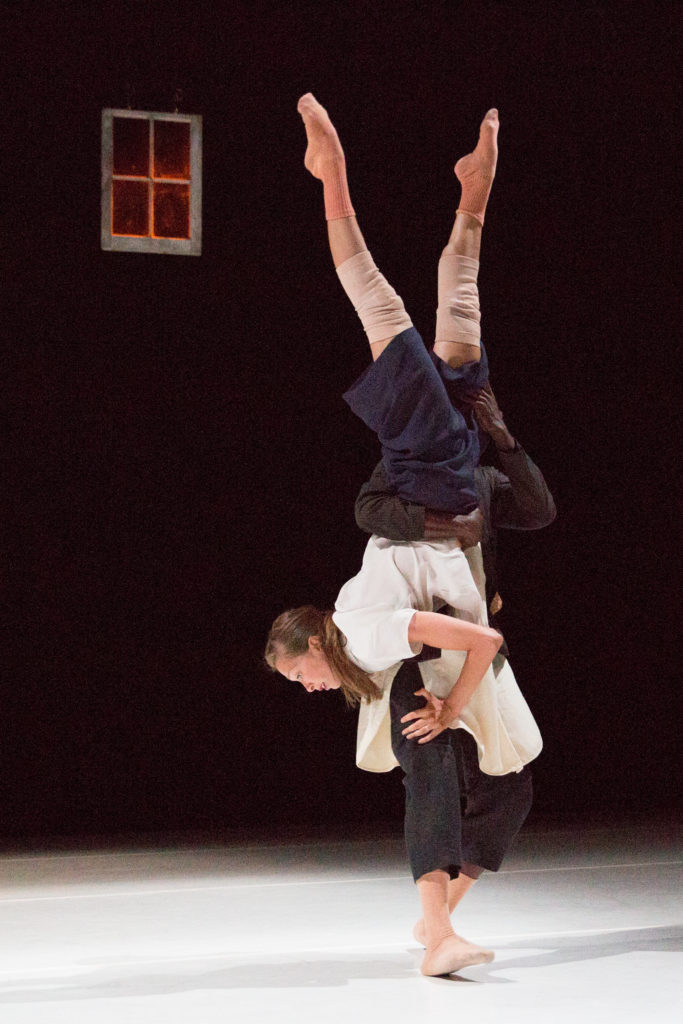 ARIAS Company’s performance confounded me. The movement vocabulary was unique. The combination of abstraction and emotion created a magical experience for me. The dancers, in the most unpretentious way, challenged gravity. How they came back to center upright after spiraling audaciously toward the floor was breathtaking. I blinked and pinched myself often, not believing my eyes. The dance, whether in stillness or motion, demanded my attention.

The opening image suggested ritual. Four dancers in white set on the stage like chess pieces carefully moved to change the garments on a dancer who performed the first solo, which was ghoulish –– white, surly face mask; the dancer coming directly at the audience, then turning away and then coming back. There was always “meaning” no matter how abstract the moment. I found this extraordinary. I could ponder the intellectual message but could not escape the feeling tone throughout. The dancers were not only beyond brilliant technicians, they were consummate actors never overstating their emotions but always sharing them with us.

The last solo was one of the finest pieces of theater I have ever witnessed: a meditation on time, life and death. I will say no more but suggest that you make ever effort to see the work of a remarkable ensemble under the direction of Bryan Arias. And did I mention there are delightful moments of subtle humor coupled with keen intellect and sensual movement?

‘Some of a Thousand Words’ 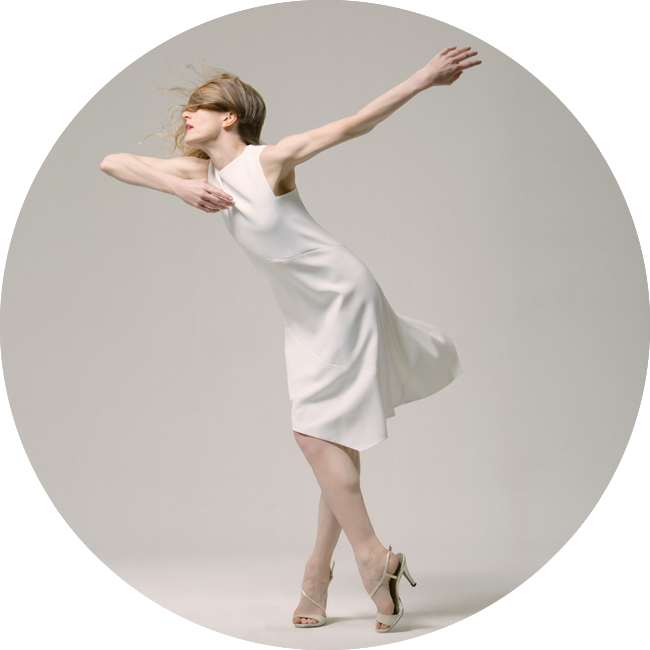 As ARIAS Company was performing in the Doris Duke Theatre, Wendy Whelan, Brian Brooks and Brooklyn Rider were performing “Some of a Thousand Words” in the Ted Shawn Theatre.

Wendy and Brian are extraordinary and their collaboration is noteworthy and remarkable. Wendy is almost more compelling to me off pointe. She is delicate, elegant, expressive and, in partnership with Brian, daring – and it works. The fusion of Brian’s pedigree in modern dance and one of the most accomplished ballerinas of our times is a delight. And add to that the fab musical group Brooklyn Rider and you have a winner.

Although the evening filled the Shawn, I might suggest that this delicate work would have enjoyed the intimacy of the Duke. I feel the impact of the work would have been amplified and had a stronger impact. 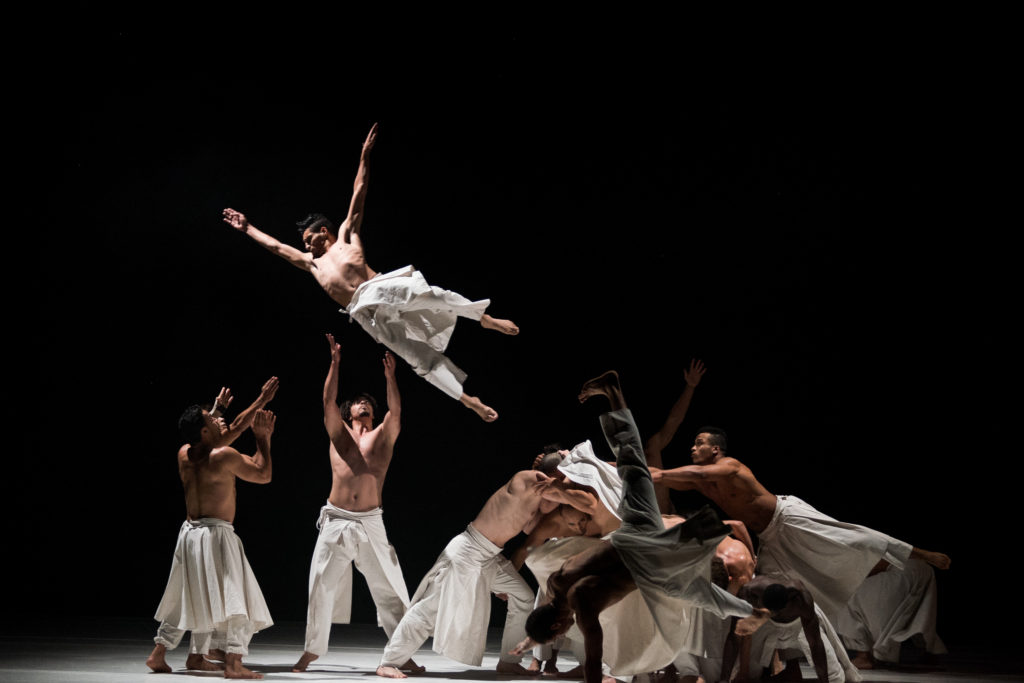 Compagnie Hervé KOUBI is an important company led by an intelligent, talented dance maker. I do not use the word “choreographer” here because the evening did not feel choreographed. The phenomenal dancers – strong, clear straightforward and unpretentious – are audience pleasers despite the fact that this is not Koubi’s intention. His is to show us men dancing together for and with each other. Despite the bravado of individual movements and the simple fact that each dancer is outstanding, rarely does one stand out. There are many interesting juxtapositions, such as when the dancer extends his arm – palm turned towards his face, uplifted – one senses the reverence of the gesture while, at the same time, a dancer is doing a pirouette in a one-armed handstand position and another multiple flips in space. There are too many moments of unbelievable physical prowess to describe. The combination of street, contemporary, Capoeira, martial arts, and hip-hop with simple gestures is wonderful. The dance maker accomplishes what he sets out to do – have us witness a community of men interacting rather then trying to compete with one another.

Despite my admiration, I was not totally convinced that a tiny bit of intervention by the choreographer’s hand would not have been able to clarify and focus and sharpen the impact of the work.

To me the importance of this work is its intention, to explore questions relevant to all of us: Koubi asks “Who am I? Where did I come from? Where is home?” It is important, as well, for the form it takes. It is a group work, ultimately: by and for the group itself, and a brave, unconventional approach to an evening-long work.