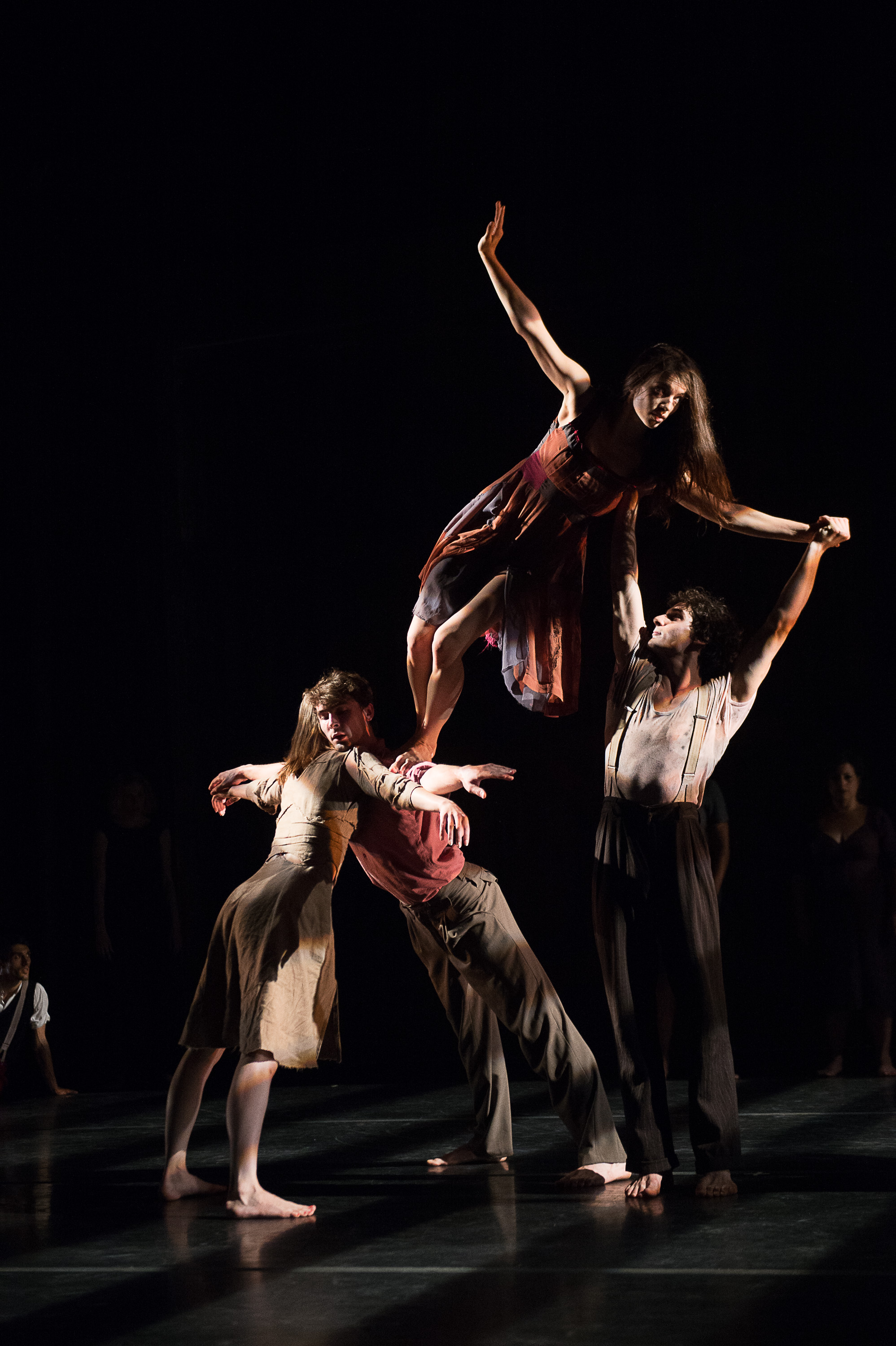 Becket — Watching Gauthier Dance Company at Jacob’s Pillow, I am thinking about a title chosen by Martha Graham — “Acrobats of God.” The dancer divine in their dedication: the years, days, hours of training, an act of reverence itself then offered to a choreographer’s vision. I am giggling because I wonder, knowing Martha, if she meant — acrobats of the choreographer/god as well as implying the divinity of dance. Forgive me, please, for this irreverent but possibly true statement.

The dancers in Gauthier Dance certainly are in that mold. Agile, supple bodies capable of extraordinarily wondrous things.

Eric Gauthier has a rare gift for programing. The first half of the evening’s performance consisted of four pieces by different choreographers. He is a skilled artistic director and ordered them to perfection. Each with its own flavor, each by a different choreographer. The second half of the program a more dense, full length work with live music rounded out the evening.

Gauthier is much admired as a choreographer but his work was not represented on this program. And I would welcome a chance to see it.

I cannot quarrel with his choice of works on this program. The audience was ecstatic. I was not. Why? I like to bypass my brain and simply enjoy watching, but I need a bit of a challenge, a feeling of discovery, an implied conversation (as Andrea Shollor, managing director of Jacobs pillow put it) between choreographer and audience.

I found the first work on the program, “Floating Flowers,” silly. OK, I smiled a bit. Using a skirt that looked like a camellia in full bloom as a prop, they played with reality. Two dancers where you thought there was one. After the reveal, the female dancer on the shoulders of her partner with her legs hidden, used his instead to make a very, very tall dancer. A fluffy white skirt on long legs — charming.

The second work, “Now and Now,” perplexed/challenged me in an uncomfortable way. The piece started with bright lights aimed directly at the audience. This did not create silhouettes nor did it seem to startle the audience. It just blurred the group of dancers. My first thought was Merce Cunningham and Winterbranch when the audience was assailed by blinding lights and an impossibly loud score by John Cage. Am I crazy? I grit my teeth and sit through it. I felt I was challenged by a great artist — for a reason — and accepted the challenge. This time I was just annoyed.

Was I seeing an equestrian image or military one? Yes, the hats looked like jockey hats but the use of unison, lock-step corps work and the shirts, shorts and tie all in tan made me wonder. I turned to Maura Keefe’s fine notes for clarity and relief. The theme was equestrian. Stripes, bright colored costumes would have helped a lot to clarify the issue for me.

I loved the third work, “Cherry Pink and Apple Blossom White,” and would very much appreciate an opportunity to see it again. It was touching, tender, about something — a relationship, roles we play as men and women —- without being didactic.

I felt the honesty and integrity in both the serious and witty nature of the work that I thought called for the moment of nudity to be just that — not bodies in flesh color cover-ups. But that is a minor detail.

I was about to finish this piece and talk about the closing work “Cantata,” then talk about two great experiences I had at the Pillow — when it happened — five policemen dead. Unhinged violence. And what of the two black men shot last week, among hundreds dead this year.

The performers I am about to talk about would be safe, we hope, on the stage, but on the street? They would be in danger. This is not an exaggeration but a fact. They are mostly people of color.

I am watching as this unfolds and praying that there is compassion and understanding on all sides. And that just action is taken in response to each situation.

I felt elation attending the performance — “And Still You Must Swing,” and a run-through of a work by Urban Bush Women. Let me say this. Both companies represent the best and highest values of their cultural and racial heritage yet, as said, could suffer from it as well. I beg you to understand this fact.

There is no curtain in the Doris Duke to separate audience from performer because I originally conceived the space as a place for intimate experimentation for artists and exploration for audiences. This performance, more intimate then most, took real advantage of the space — the tap platforms built as close to the audience as possible — the musician’s stands pre-set as we filed in — letting us know their importance visually.

The performance was delicious before the first note was played or the first dancer tapped; Dormeshia Sumbry-Edwards, Jason Samuels Smith and Derick K.Grant in fine gold shoes…yes! A female drummer, Allison Miller…o.k! Carmen Staaf on piano, Alex Hernandez on bass and Gabriel Roxbury on Djembe. White female jazz musicians — what!! — and the juxtaposition of the modern dance wonder, Camille A. Brown.

To realize the work has historical underpinnings, is not a prerequisite to enjoyment. It was enough to just watch and whoop with joy and amazement at the plethora of invention and remarkable artistry. There was tapping that was intense, there was tapping that was lyrical. There were times when the dancers slide across the stage as if on ice skates —oh my! There were solos to marvel at and group work where unison and individuality coexisted. Sometimes it felt like watching grown ups playing like happy kids. And there was a transcendent moment — so beautiful, so artful, recognizing the tragedy of the loss of black lives. I am so grateful to these performers. The rigorous, myriad esthetic standards used to assess a concert were met and surpassed while addressing meaningful social issues. See the post performance talk below:

And then there was Camille A.Brown reminding us of African roots. Her attitude was expressed through a dynamic intensity and her unique ability to pull from some deep, knowing place inside her. Some movements echoing tribal dance, her rhythms matching the other dancers in a completely different dance genre. How can we be in lock step, in unison yet share our individuality? These four dancers show us how an individual can be a significant part of a harmonious group.

The work of former Pillow Director, Sali Ann Kreigsman, needs to be acknowledged here. She was a formidable advocate for the tap revival we are enjoying today.

Please refer to Eli and Carolyn Newberger’s complimentary coverage of And Still You Must Swing.

I have admired the work of UBW founded in 1984 by Jawole Willa Jo Zollar and presented her work as part of the Next Wave Festival at BAM. It is ironic given what I have had to speak about in this column, that the thrust of that festival was to celebrate the “rising tide,” as I called it in the early ‘90s, of work coming from Americans with deep roots in non-European cultures because European work was already celebrated at BAM.

I hope you get to see UBW soon at the Pillow. You will see a unique collection of individuals, not subsumed by ensemble work. As is And Still You Must Swing this work celebrates and reveals, through individual exceptionalism, non-linear, non-verbal, clearly articulated stories.

I have had a difficult am time writing this — keeping my emotions steady. I want to celebrate this group of people who have artfully, poetically, powerfully tried to share their identities with you. The tide has risen. I do not want to have to fear for their lives.

Back to the last piece on Gautier’s program. “Cantata” was the first time I saw the individuals of the ensemble. Dancers and musicians of various sizes and shapes are revealed framed by lighting that created the illusion of a picture frame. The beautiful rustic back wall of the Ted Shawn Theater became a touchstone convincing us that we were in a small town in Southern Italy. The music and musicians were delightful. The work itself pleasant and engaging.

Individuals make up the group. You cannot have more then one without having differences — unless you clone and even then I suppose philosophically there might be an argument for variation. It is time to wake up and end the violence of ignorant sleep.