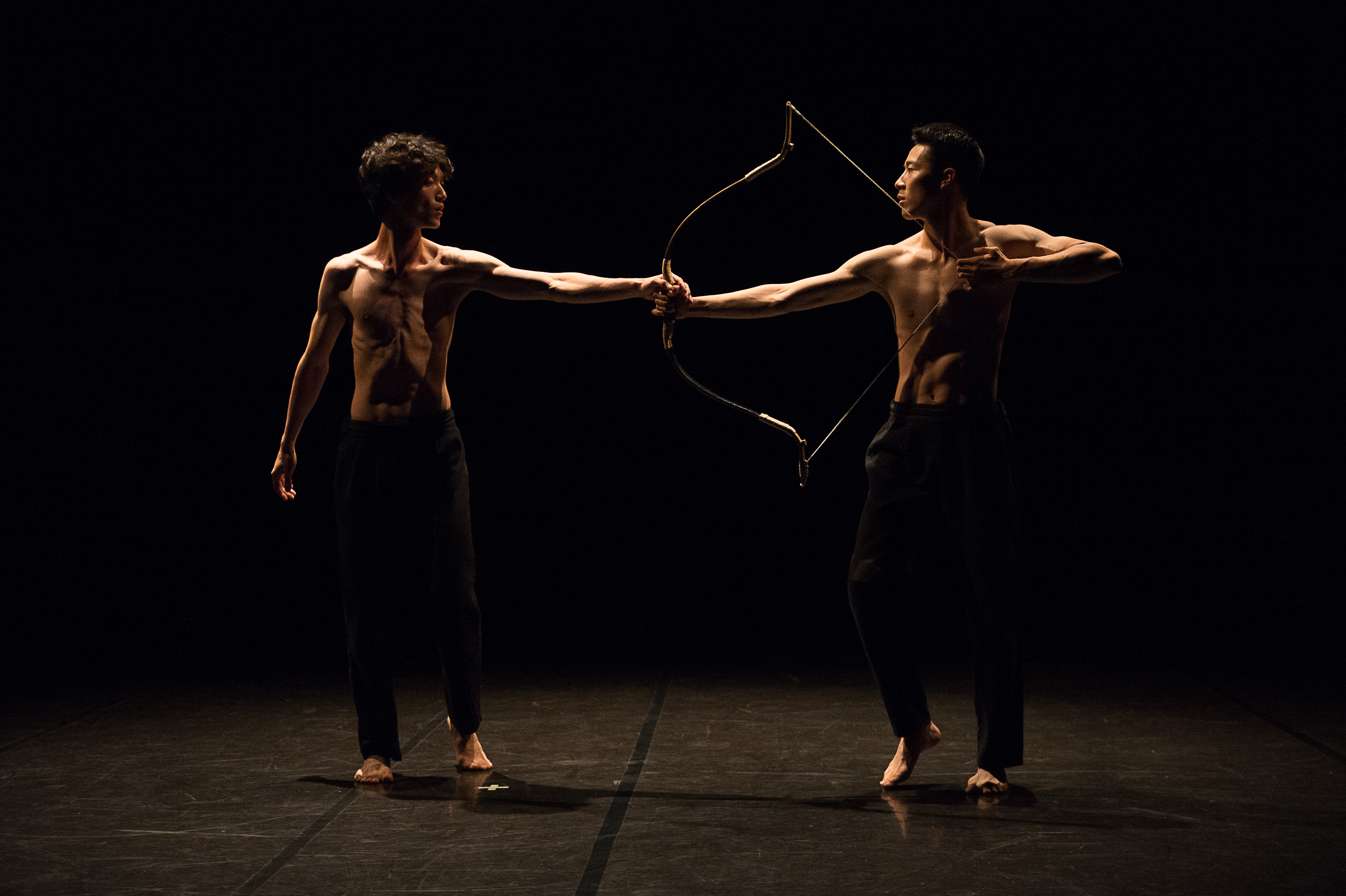 Becket — With the drums of Che Malambo still echoing in my ears, I am faced with stillness. (I won’t say silence in deference to John Cage who found sound everywhere). I have traveled from Argentina, with Che Malambo, to Korea, with Bereishit Dance Company, in a day’s time, at Jacob’s Pillow.

Immediately, I am in thinking rather than feeling mode. On the stage stillness, two young men and a bow. Am I interested? Don’t know but am doing what I have asked of you – keeping an open mind. This performance is not an immediate grab like Che Malambo but as the time passes, a resounding yes — I am definitely intrigued. And I move out of my head to a more visceral and non-verbal place watching Bereishit’s “BOW.”

There is a wondrous thing that happened when I danced. I was present, in the moment, centered – what I experience as consciousness – a sense of transcending my every day self.

Other dancers I have spoken to share this, expressing it in a variety of ways.

This state is transferred, shared with the audience and you are probably aware of it on some level. I found that the men from Argentina barraged the audience with their energy keeping this personal sense of being to themselves. The men from Korea however shared their center, their conscious awareness with us. As strong, fast or complicated their movement, I could sense their internal centeredness. As T.S. Elliot says in Four Quartets “ at the still point of the turning world…there the dance is.”

The dance evolved in several wonderful ways. There was subtle humor. There was the sense of a game. You could actually figure out the rules and try it at home. The last section seemed like romance of the bow. The relationship to bow and arrow was apparent in the quality of the movements. Whether fast, slow, percussive, lyrical, difficult or complex the dancers always maintained a sense of flow, of tension and release as in the act of archery — pulling back the bow and releasing the arrow. There was a sense of effortlessness and “self- consciousness” at all times. There was occasional music from unfamiliar instruments that stirred emotions of a very different sort than the Argentinian drums. And, even in the silent sections, there was rhythm and sound produced by the bodies in motion.

The second piece, “Balance and Imbalance,” was danced by an extraordinary group of women and men. Remember you were asked to notice how men and women were used? Delightfully in this work, they were equals. A solo (by a man in green pants not identified in the program) was beyond remarkable. However, all of the dancers were brilliant and a joy to watch.

The lighting and music/sound both played a much more prominent role in this part of the performance. Both were exceptional.

I hope you get to see this company. The program notes are extensive and will give you much more to think about.

I have to give a shout out to a critic and friend, Deborah Jowett who has watched and written about dance with great heart and intellect. There was a time I would have given this work less respect because this work reminded me of some early dance experiments. Trisha Brown, Steve Paxton and others involved with the Judson Church introduced the use of pedestrian movement, championed a sense of effortlessness and an abandonment of pretension. All of these elements happily rediscovered with originality by Bereishit choreographer Soon-ho Park.

When I compared and complained, Deborah, in her wisdom, would say — watch and SEE what is before you. Remembering and comparing has its place, but can rob the moment of enjoyment and appreciation.

Again, another reason to watch with beginners’ mind.