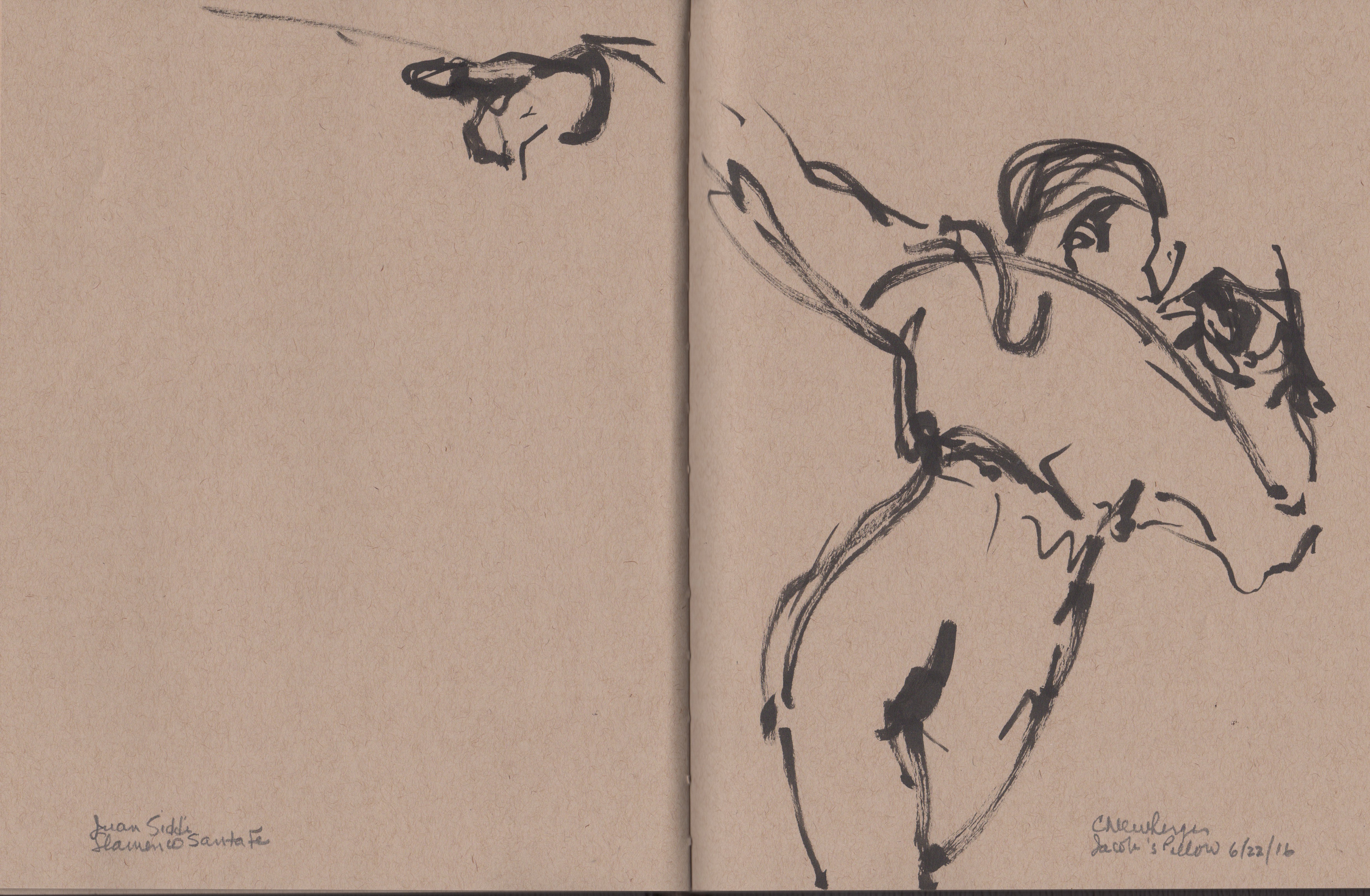 Becket — On opening night at Jacob’s Pillow, as their sister company, Aspen Santa Fe Ballet, held forth in the Ted Shawn Theater, Juan Siddi’s company of Flamenco dancers and musicians pushed the envelope of long tradition in the Doris Duke barn.

There were revelatory moments in the presentation, which featured imaginative, even fantastical ensemble variations of familiar Flamenco tropes. Here one witnessed the proud carriage of a synchronized troupe of bodies, twirling, stamping, engaging together in expansive scenarios redolent of romance, sexual allure, competition, and personal display. The real excitement, however, derived from the astounding solo turns in which the personal, as opposed to the choreographical limits, were put to the test.

The stars of the evening were Juan Siddi himself, whose passionate expressivity and barely-controlled physicality inflamed the emotional mood every time he took the stage, breaking free from the constraint of the ensemble. His brilliant colleague, Carola Zertuche, who trained in Spain before founding her San Francisco studio, La Solea, and, in 2004, became Artistic Director of the Theatre Flamenco of San Francisco, brought her own distinctive style to the show. Her astounding emotional range, sinuous finger and hand gestures. movements, and both grand and subtle of her torso and back, mesmerized the audience, particularly when she engaged in duo with Siddi and leaned into vocalist Jose Cortes, as he slowly approached her from behind. This magnetic artist is in now her seventh season as guest dancer with the Siddi Company.

“So, then, the duende is a force not a labour, a struggle not a thought. I heard an old maestro of the guitar say: ‘The duende is not in the throat: the duende surges up, inside, from the soles of the feet.’ Meaning, it’s not a question of skill, but of a style that’s truly alive: meaning, it’s in the veins: meaning, it’s of the most ancient culture of immediate creation. . .

“Seeking the duende, there is neither map nor discipline. We only know it burns the blood like powdered glass, that it exhausts, rejects all the sweet geometry we understand, that it shatters styles and makes Goya, master of the greys, silvers and pinks of the finest English art, paint with his knees and fists in terrible bitumen blacks, or strips Mossèn Cinto Verdaguer stark naked in the cold of the Pyrenees, or sends Jorge Manrique to wait for death in the wastes of Ocaña, or clothes Rimbaud’s delicate body in a saltimbanque’s costume, or gives the Comte de Lautréamont the eyes of a dead fish, at dawn, on the boulevard.

“The great artists of Southern Spain, Gypsy or flamenco, singers dancers, musicians, know that emotion is impossible without the arrival of the duende. They might deceive people into thinking they can communicate the sense of duende without possessing it, as authors, painters, and literary fashion-makers deceive us every day, without possessing duende: but we only have to attend a little, and not be full of indifference, to discover the fraud, and chase off that clumsy artifice.

“Once, the Andalusian ‘Flamenco singer’ Pastora Pavon, La Niña de Los Peines, sombre Spanish genius, equal in power of fancy to Goya or Rafael el Gallo, was singing in a little tavern in Cadiz. She played with her voice of shadows, with her voice of beaten tin, with her mossy voice, she tangled it in her hair, or soaked it in manzanilla or abandoned it to dark distant briars. But, there was nothing there: it was useless. The audience remained silent.”

We note here with gratitude the illuminating introduction to this ballet by the Jacob’s Pillow Scholar in Residence, Brian Schaefer, who introduced the concept of Duende in his pre-performance talk, in which he also described the deep history of Flamenco in the Middle East, India and its Roma derivations, Hebrew liturgy, and the more contemporary Flamenco synthesis in Spain and the Spanish diaspora. Pillow talks like Schaefer’s seem always to deepen the audience experience, and provoke, in addition to comprehension of what transpires on the Pillow stages, further reading, watching, and listening. Attending Jacob’s Pillow, indeed, is a sublime and efficient device to grow, learn, and delight in the dance.

For example, apropos of Schaefer’s reference to the deep history, note, please, the legacy of the master of the Oud, Zyrab (789-857), who traveled from Baghdad to Persia to North Africa, and ultimately to the service of Umayyad Prince Abd ar-Rahman II in Cordoba. Zyrab spent 30 years in Spain and profoundly influenced the music of the entire region. To get a lively sense of his impact, watch and listen to this performance by the contemporary Flamenco guitarist, Paco de Lucia, and his troupe. Note especially the Middle Eastern inflections in his imaginative improvising and the male singer’s stirring incantations:

An ensemble of accomplished musicians was seated in two widely separated groupings. On the extreme left of the back of the stage sat the pianist, Alex Conde, and the cellist, Michael Cott, and 20 feet to the right a percussionist, Allejandro Valle, on the cajon (a resonant box on which the musician sits, striking its surfaces with his fingers and palms), and 2 guitarists, Jose “Chuscales” Valle Fajardo, a renowned soloist, and Allejandro Pais Iriart. 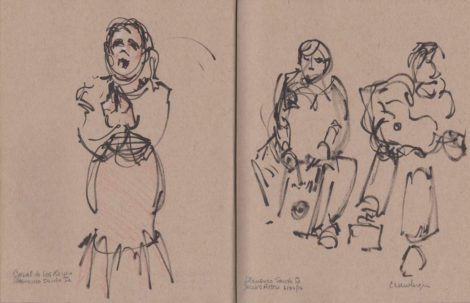 Although each musician, excepting the pianist, faced a monitor speaker, which presumably conveyed to him an appropriate instrumental balance, neither the distinctive qualities of the individual instruments nor the subtle rhythms of the dances, which were always embellished by snapping fingers, clapping hands, resonant footwork, and spontaneous “oles,” were clearly transmitted to the audience.

Neither cellist Cott’s brilliant high-register improvisations, nor guitar virtuoso Chuscales’s gorgeous layering of rhythm, nor the upper-range polyrhythms of his son Allejandro’s cajon, could penetrate the blurred clatter of the ensemble mix. The essential instrumental elements of Flamenco, typically voiced by just a guitar, were overwhelmed by distortions in the miking of the cajon (far too much bass), nearly absent treble and insufficient volume in the lead guitar, leading to a blurred homogenizing of the instrumental sound. If there were a sound man in the house, he was asleep at the switch. The Flamenco tradition was sadly diminished by this unfortunate lapse.

These vignettes of Juan Siddi and his colleagues’ appearances in this November, 8, 2011, video capture what this ensemble can do in well-recorded performance. It celebrates beautifully his City of Santa Fe Mayor’s Recognition for Excellence in the Arts. Siddi’s own brief and thoughtful reflections on his life and career add to the satisfaction of the viewing. Note, too, the exquisitely timed choreography, the dancers’ solo turns, and the glorious guitar of Jose “Chuscales” Valle Fajardo.

Prior to the Intermission, the company presented a survey of contemporary subsets of Flamenco, first Siddi’s choreographed representation of the Havana Flavored “Guajira,” featuring the entire company and musical ensemble; then a lovely duet by Siddi and Zertuche, “Re-Encuentro,” in which she unveiled her enormous vocabulary of facial and corporeal expression, signifying variously, delight, supplication, yearning, defeat, with an overlapping, evanescent embrace of each figure by a shared, tasseled shawl.

“Segirya,” a contemporary/traditional dance choregraphed jointly by Siddi and Zertuche, featured the nuanced, wide-ranging, heartfelt singing of bass-baritone Jose Cortes. “Nataraj,” or “Lord of the Dance – Tangos de Granada” followed. In the latter, Juan Siddi, who designed both the costumes and the ballet, left an indelible impression of grace, tensile strength, and masculine restraint. Personal display wasn’t the point in this representation of his surpassing artistry.

After the intermission, a textured, romantic, and dynamically-modulated guitar solo by “Chuscales” Valla Fajordo emerged transparently, and rather miraculously from the previous blur. This was the most musically-satisfying event of the evening.

Both of the 2 final pieces featured Siddi, first in “Solea with Radha Garcia, an expressive violinist, miked to emphasize the deeper, viola-like sonorities of her instrument, wearing a matador-inspired costume of his own design, with epaulets, tassels rich in gold and lavish embroidery, in romantic duet. He was the epitome of masculine power, and in his sense of heroic, tragic isolation and mortal risk, seemed to summon the awareness of imminent death implicit both in the bullfight and the passion of Duende.

The evening ended with a tour-de-force of ensemble work by the full company, featuring improvised solos by the female dancers, bringing the audience to its feet.